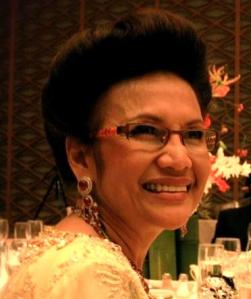 Cause to celebrate? Razia Geneid - sister of Taib Mahmud

This breath-taking hand-out (the equivalent of US$ 285 million) was discovered by Sarawak Report in the public records of  Malaysia’s Companies Commission.  It was registered last June as a charge against one of the couple’s privately owned companies, Kumpulan Construction.

Kumpulan Construction is registered as having RM1 million share capital, 5% owned by Zaleha Binti Mahmud Hajjah (her elder sister) and the rest by Mastim Sdn Bhd, which in turn is jointly owned by Raziah and Robert, an Australian national.

The vast size of the loan, particularly in relation to the relatively modest assets recently posted by Kumpulan Construction, raises a number of questions for the couple and the bank , as well as the Chief Minister of Sarawak, who has repeatedly abused his position by granting his sister’s companies lucrative state-funded projects which they are not equiped to carry out.

On what basis was such a loan granted ?

Insiders  confirm that Kumpulan Construction “never did an honest day’s work on any of the contracts they secured” and that “everything is sub-contracted out to others, especially to Hock Seng Lee (HSL)”. 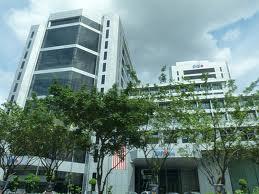 Therefore, Sarawak Report questions on what basis RHB, a public bank owned by Malaysia’s public service pension fund, the Employees Provident Fund (EPF), advanced a loan of such magnitude to this medium-sized private company?  Indeed, could any other equivalent firm leverage what amounts to nearly a sixtieth of the RHB’s entire loan capital?

Despite handling many public projects, Kumpulan Construction supplies no public information about the company (can’t they afford a website?).  However, from the limited details of its accounts provided through the Companies Commission, we know that the company made a turnover of RM43 million last year, registering an after tax profit of just under RM4 million.  Also, its reserve capital is  just over RM4 million, plus it has a share capital of RM1 million.  Given the company has over-all liabilities of around RM 42 million, matched by its over-all assets, the loan seems inexplicable.

This leaves onlookers to speculate as to whether some massive new project has been awarded to Raziah and her husband, which RHB has been told about, but the rest of us have not?

Of course, if Kumpulan Construction had just won another huge state project that needed financing then any bank would be legitimately entitled to advance the loan because the payment would be secure.  But, of course, the money should not be advanced before such a project has been confirmed and made public, because that would be highly irregular. 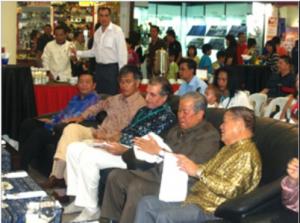 Robert Geneid centre - In a crowning irony he and wife 'Rosie' were Guests of Honour at this 2010 Christies 'Green Auction' to 'save the planet', hosted by David Rockefeller in New York. The same Rockefeller is reported to have accepted $100 million of Taib's dirty money into his bank in 1994 - money gained from destroying the Borneo Rainforest. See previous story.

However, in Sarawak Raziah does occupy a very privileged position, given the notorious corruption of her brother, who in other countries would have long since been investigated, prosecuted and put into jail.

So, it is certainly worth speculating that the Chief Minister may very well have decided to give her just such a mega-contract and the announcement is waiting in the pipeline.  If so, she is likely to have been made well aware of it in advance and could have privately informed the bank of the fact.

It would of course be highly irregular for a bank to proceed on a loan on this basis and risk shareholders’ money (which in this case includeds pensioners) on unpublished state contracts, so maybe such speculations are unfounded?  If so Sarawak Report would be happy to stand corrected by Kumpulan Construction and RHB Bank.

‘Flurry of activity at Kumpulan Construction’

Nevertheless, Sarawakians might do well to prepare themselves for some grand announcements.  Enquiries by Sarawak Report have brought news of a recent ‘flurry of activity’ going on on the 2nd floor of the Standard Chartered Bank Building in Kuching, which is currently occupied by Kumpulan Construction.  This has also been accompanied by rumours that the Chief Minister’s sister has managed to bag around half of all the NKRA projects awarded by the Federal Government to Sarawak!

On 1st February of this year it was announced that the Federal Government would be spending no less than RM3.4 billion on infrastructure in the state under the National Key Results Area (NKRA) scheme.  This scheme is designed to help improve the poorest regions of Malaysia and, despite being the richest area in terms of natural resources, Sarawak, tragically, comes under this category as a result of the years of plunder by the Taib family.

The money, is intended to be spent on upgrading roads and power supplies and improving basic infrastructure in the rural areas, but  it would certainly come as no surprise to learn that half of that entire budget is going straight through the hands of the sister of the Chief Minister.  It is indeed more than likely that we will eventually also discover that the remainder of the money is being channelled through his other relatives.

Political handout that will benefit nobody?

The Federal Government doubtless decided to invest this RM3.4 billion with a view to influencing the upcoming State Election in BN’s favour.  However, by allowing the tenders to go through the corrupt old Chief Minister, politicians should have foreseen the danger of such a gesture spectacularly back-firing, with the money pouring straight into the pockets of the greedy Taibs. 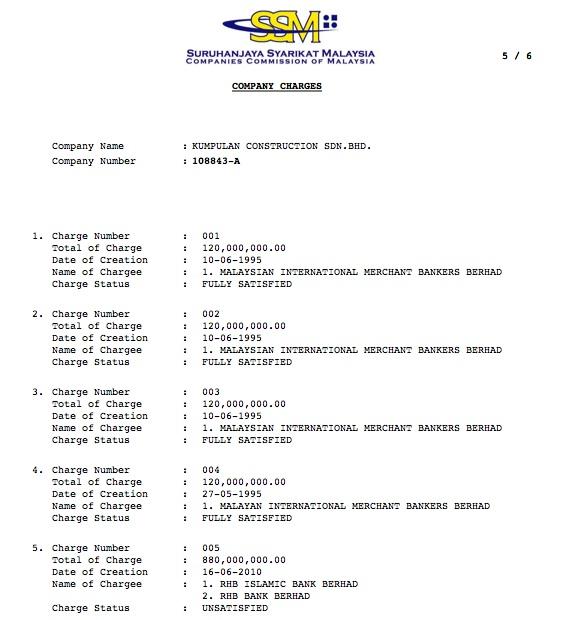 Past loans of MR120 million to Kumpulan have already been satisfied

There is of course the other possibility that the loan is to facilitate a private contract offered by a genuine business partner (there is always a first time for everything).  But who would hire Kumpulan Construction and its handful of staff to manage a major construction project when they have never carried such a thing through before  and why hasn’t it been announced?

What is on record is an impressive list of State projects that Taib has handed to his own sister through Kumpulan Construction, which she has then sub-contracted on to actual construction companies for a substantial discount.  The list below is a series of public works contracts awarded to Kumpulan Construction listed in the Construction Industry Development Board (CIDB) public website.

They amount to approximately RM165 million, however the list is clearly not exhaustive as it does not cover any contracts since 2003.  It does not list the Kuching Sewerage System update, which Kumpulan sub-contracted to HSL, nor does it include the Senari Deep Sea Port (RM160m) and the outdoor stadium at Petra Jaya (RM105m).

Raziah and Robert’s other family building company Kumpulan Parabena has also received an impressive list of public contracts, amounting to another RM150 million.  Yet, under CIDB rules the same Directors are not allowed to register under two separate companies to prevent collusive tendering.

Showing once again that in Sarawak the rules do not apply to the rulers.