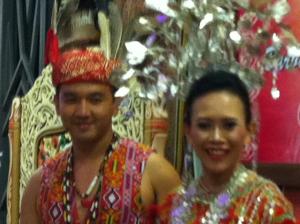 Barbara Dubah Jabu, a wealthy match for her new husband with so much land taken from Iban NCR lands and handed to her by the state

News is circulating in the Betong area that Deputy Chief Minster’s family has just cashed in on Native Lands handed to them by the State of Sarawak (thanks to his political ally the Chief Minister, who is also the Planning and Resources Minister and Chairman of the Land Custody and Development Authority).

They are believed to have made a sale to FELCRA for RM 7 million.  Not bad for lands that have been extracted from their rightful owners for a pittance!

Sarawak Report wonders if either FELCRA, which as a public federal body should publish all such purchases and deals (especially if the families of government Ministers are profiting from them) or indeed Jabu himself would confirm which of his many land acquisitions have been sold on in this way?

Or perhaps the lawyer handling the deal, Ani Solep,  Advocate and Solicitor, would be so good as to make public the details of such a sale of once public lands to a public body? 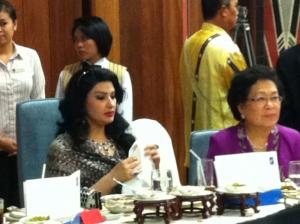 Over shadowed by the Star Attraction? - Taib brings his own bride now revealed to be named Puan Sri Ragad Waleed Alkurdi

It is, of course, well-known that it is not just the Chief Minister and his family who have been grabbing native customary lands for themselves.  His Deputy, Jabu, is famous for having hugely profited also from land hand-outs in return for his total political loyalty.

Jabu has acquired enormous tracts of land for himself and his family during his lucrative years as Deputy to Taib Mahmud.  Given his modest official salary and poor family background,  it is inconceivable that he could have managed to raise the sums needed to buy these areas (now worth many millions of ringgit) if he had paid the market price.

However, as Taib’s political secretary Karim Hamza so recently explained, BN regard it as a perk of political office to take advantage of the “business opportunities” of land that might be offered to you “at a very cheap price”.  The rest of the world regards this as corruption.

Enough to cover the wedding!

Jabu’s daughter Barbara, of course, got married this very weekend in great splendour.  The Chief Minister and his own surprise  new young wife attended the ceremony.  Our exclusive photographs show that the bride and groom decked themslves out in full traditional Iban costumes to celebrate their union, but the real Iban population of their home areas and longhouses will be wondering how much of all this lavish entertainment was paid for at their expense? 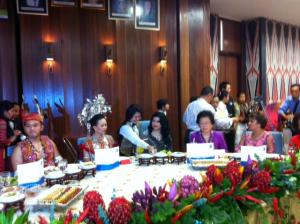 Top table - nothing but the best for the Jabu wedding

lands taken by the state and then sold to him and his family at a very cheap price?

For example, was the land sold to Felcra for RM7 million the approximately 2,000 hectare plot that was recently handed by Taib to a company called Herba Aromatics?   The owners of Herba Aromatics are none other than Gerald Rentap Jabu, the Deputy Chief Minister’s own son and his daughter, the newly wedded Barbara!  A close family crony and cousin, Robert Lawson Chuat also enjoys some shares.

This land was ‘purchased’ from the state in 2008 for an agreed price of just over RM 1 million and is located in Lidong Road area, Betong.  This is all Native Customary Rights Land belonging to Jabu’s own Iban people and it is of course worth a great deal more than this.  In fact the land registry admits that the area is currently used for integrated farming purposes, proving that it belongs to the natives and not to the state – far less to Mr Jabu’s, who has now acquired it for such a low price.

All for the kids? - Jabu's kids are named as the owners, but his influence got them the land! As of this year they still had not paid the State for the acquisition.

How much did the real owners receive? 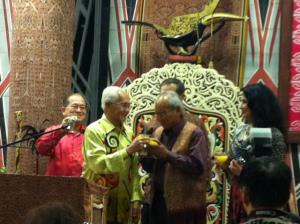 Crony politics - Jabu has received a wealth of lands from his boss. The lands were taken from the people of Sarawak.

We therefore wish to enquire how much Jabu’s children paid the natives, whose land they alienated?  Many natives are angered in Betong that Jabu has acquired large tracts of  Iban land in the area by paying the owners a laughable RM500 a door.  Less than a month’s wage in Kuching for their entire lifelong inheritance!

Often this RM 500 a door compensation has in fact been paid to Headmen on behalf of members of their longhouses.  Often these families did not even know that their land was being traded in this way and did not even receive the money!  Such practices are of course illegal and some families are now seeking legal advice to proceed against their exploiters.

Just as outrageously, we can inform you that even the minimal sum which Jabu’s children were supposed to be paying the state for this area of valuable land ( taken from its rightful Iban owners), had yet to be paid earlier this year – a full two years after they had kindly received it from the Chief Minister! 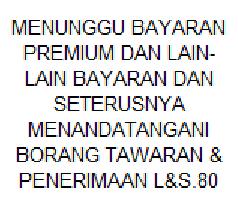 Don't worry Mr Jabu, feel free to pay later. The State of Sarawak would not want you out of pocket before you have sold it on for a massive profit!

Did the Chief Minister perhaps tell Jabu’s children that they didn’t need to find the money to pay the State of Sarawak until after they had sold it on to somebody else at a much higher market price?  Would that sale perhaps have been to FELCRA for RM7 million?

Sarawak Report demands that the Land Registry make clear whether Jabu’s children have yet paid all the money owing for this land and if so when?

Such a profit would certainly have paid for Barbara’s wedding and set her and her new husband up very nicely for the start of their married life (although it represents but a small fraction of the family fortune).  They have done so much better than those rightful owners, who were given RM 500 a door (if they got it), haven’t they?

So, this is progress and development BN-style!  It means enormous wealth for Government 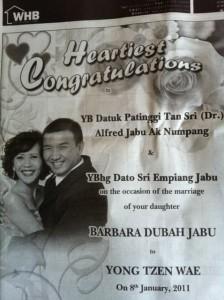 Haven't they done well thanks to Daddy Jabu?

Ministers, who are supposed to serve the people, while the poor lose their lands and livelihoods to make them rich.

Of course it is up to the people of Sarawak whether they continue to allow themselves to be robbed in this way or demand their lands back, which is what the opposition parties promise to do!