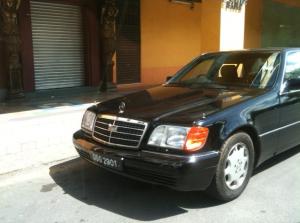 George Chan, Deputy Chief Minister and President of SUPP, parks his car on the yellow line!

Hot on the heels of today’s scenes in Miri where George Chan was booed and heckled by onlookers at the wet market and later at a coffee shop, we have been given a flavour of why his consituents can’t stand the man!

An angry reader from the Deputy Chief Minister’s home town has sent Sarawak Report pictures of Chan’s car and also the car of Miri’s BN Mayor, Lawrence Lai Yew Son, parked on yellow lines without any danger of a ticket he says!

The reader, who got a ticket himself in exactly the same spot, says he has seen both cars using the same position on a regular basis, which is how he got the photos so easily.

The rest of us can only sympathise.  Surely there is nothing more annoying than a law that the rest of us have to obey, but that those who made it flagrantly ignore?  Parking in central areas is frustrating enough without getting a ticket and then seeing your leaders and representatives getting away scot free!

I make the laws, but it is for you to obey them not me!

Our reader laid out his fury in plain terms in his letter to us.  He said that he had got a ticket earlier for parking in exactly the same spot in Jalan Ngo King Hi 339-353 at the Pelita commercial centre at Survey Supermarket. Yet he photographed the Mayor and George Chan’s car parked in the same place on the same day and they received no tickets!

” I got a ticket from the city council before but not the “leader”. I even went to the council office to complain but no action was taken”

fumes our reader who also sent us a picture of the Mayor’s car, parked he says just next to the parking attendant’s tent! 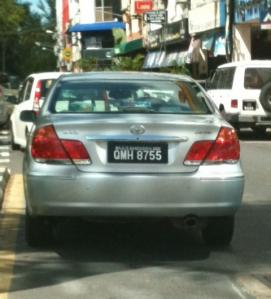 Public servant or a man above the law? - Mayor's swish car is unscathed by ticketing

The complainant went on to tell us:

“Same goes to our Deputy Chief Minister, Mr George Chan. There were heaps of parking spaces around the area but they chose to park at an illegal place. I even asked the parking attendant why they didn’t give ticket to them. The answer is “they are the boss”. This is unfair to us and I just want to share this with everyone what a bad example our leaders “bosses” show us”.

Our reader says it was not just for a short while that Chan parked either.  He had drawn up outside an SUPP meeting which he attended for at least an hour or so!

Normal people get a RM 60 fine for parking on yellow lines, which is very little money indeed for the likes of George Chan, who has managed to make so much money out of his period in office.  So, maybe the logic is that such a fine is not worth putting onto the cars of BN’s YBs, since they are all so rich it would not be a deterrent!

If so, Sarawak Report might remind George Chan and his colleagues who flout the law that there is another penalty for such behaviour, which might be a little more painful for them to bear.  This is the penalty against their reputation as worthy leaders and representatives, which may very well be executed on them at the upcoming election. 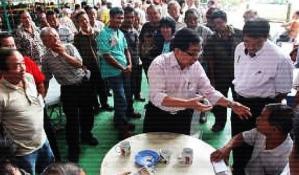 The signs coming out of his very bad reception as he turned up to meet his constituents in the market do not bode well for him either.  He was trying to act like a man of the people, but they are rightly worried about food price rises and petrol price rises, something that a guy who likes to dump his luxury cars on yellow lines is unlikely to worry about himself.