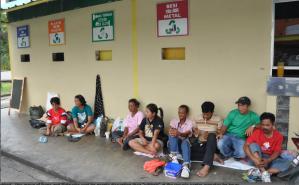 While Taib Mahmud used his BN party convention (staged at the new Borneo Convention Centre, which he corruptly hired his own family to build and manage) to lash out at the “liars and cowards”, who dare criticise his policies of ‘progress and development’, Sarawak Report took receipt of a tape, some interviews and photographs.

The material shows the scavengers who scrounge their living out of the re-cycling dump in the car park of his own Borneo Development Corporation!  The scenes take place every day just 150 meters from the office of his political secretary Karim Hamza, who also enjoys the job as Chairman of the BDC.

Sarawak is Malaysia’s richest state and has a small population.  Billions have been raided from the jungles and from oil and all this wealth is plainly reflected in the vast homes and wealth of the Taib family and theirbusiness associates.  However, it is clear that sharing some of this wealth with the people he took it from is not part of that policy of ‘progress and development’, for which Taib so loudly refuses to apologise.

We have learnt that many of these scavengers, who wait to crowd around the cars drivers who come to dump their old and broken things, have come from the Stampin Resettlement Scheme – they had been promised a better future by BN, but as so often, the promises turned out not to be straightforward. 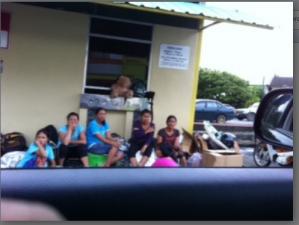 Waiting for the car to stop and the rubbish to be chucked out!

Each tiny plot costs RM 10,000 and if the settler cannot pay it they cannot claim title to the land, even if they have shouldered the cost of building a house.  This swamp land also needs earth filling to be suitable to build on and this costs another RM 8,000 for the impoverished natives, making ‘resettlement’ even harder to achieve. Most of these low-paid or un-paid settlers have no hope of meeting such costs.

As the Chief Minister sets out to destroy even more of the country with his new mega-industrial ‘development’ programme, SCORE, the half million further natives who are threatened with displacement as a result should consider these scenes, which show their fellow people who suffered first. 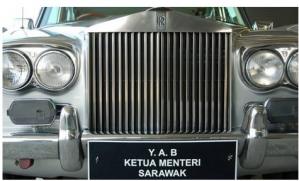 Of course, such petty problems, which affect so many thousands of natives who have been displaced from their lands by ‘development’, appear to be beneath the attention of Taib Mahmud, who arrived at the convention in his customary Rolls Royce.

Even less so his politician son Rahman, his once rumoured successor, who was too busy enjoying his skiing and jet-set lifestyle (according to his facebook) to bother to turn up at all.  However, Sarawak Report thinks it is appropriate to report some of the stories of anguish behind the stampede as each car arrives at the dump, especially during the week of International Womens’ Day.

Everyone matters – women struggling to survive

We however do think it is worth investigating the human stories behind the mainly women who are waiting at the dumps all over Kuching. 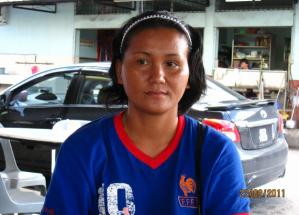 Just a squatter, so who cares?

Nuratiqah binti Abdullah told us she is 34 years old and has three children aged 8, 9 and 15. Her family lives in resettlement area but on land without a Temporary Occupation License. Therefore she is unable to access basic utilities such as water and electricity. At night, her house is lighted up with only one bulb running from a car battery.

The home was partially damaged when fire broke out 3 weeks ago. The children’s school uniforms were lost in the fire. Her husband is jobless and occasionally joins her at the recycling centre. Invalid father-in-law lives together with them. He receives RM150 in welfare monthly. 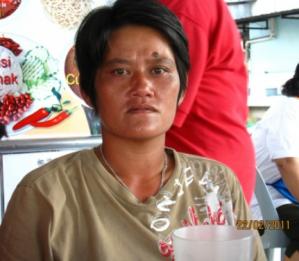 A generous RM 200 a month to take care of her children and elderly Dad?

Nanong binti Sidek is aged 37. She lives within the resettlement scheme. Her dependents are two young children; son 12 years, daughter 9 years, for which she receives RM200 in child welfare support monthly. Her husband deserted the family 4 years ago.

She lives with an aged father, who suffers from diabetes and heart ailments. She formerly worked as waitress in a coffeeshop, but was unable to withstand constant scolding by employer. She has been scavenging since 2008.

Kiat anak Resat is 69 years old. She too resides in Kampung Stutong Baru, which forms part of the Stampin Resettlement Scheme. The resettlement scheme itself is made up of 1154 lots of land. She formerly worked at a construction site for 6 years before she took to scavenging for the last 4 years. 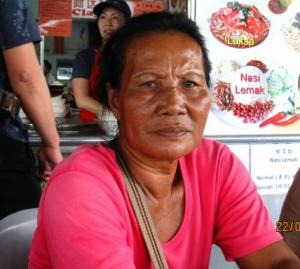 Her husband is wheelchair bound due to a stroke, for which they used to receive welfare of RM60 per month for 2 years until it stopped. She has 5 grown up children; her 3 sons have no fixed income (one is an alcoholic), her 2 daughters are already married with families and contribute little support.

Down the road from the dump can be found some of Kuching’s wealthiest developments.  Taib’s other son Abu Bekir’s apartment at Village Grove is about 300 meters away and he must pass them every day.

Abu Bekir’s fabulous wealth is un-earnt, because it came in state hand-outs in the form of contracts and concessions given by his Dad.

However, the old man clearly does not believe in extending such generosity to the mothers and old women who are suffering in his resettlement schemes. They are expected to pay impossible sums to take advantage of the housing schemes advertised by BN as opportunities for the poor. 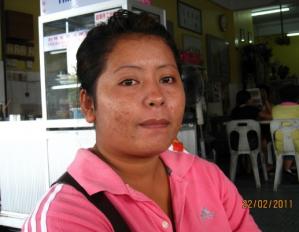 At 22 the sole breadwinner and no support

Betty anak Gelangyan is 22 years old and the newest to the group. She is also from Kampung Stutong Baru. Her mother is 43 years old and unable to work as she suffers from epilepsy, for which she received welfare of RM70 per month for 2 years before it stopped.

Betty works in coffeeshop RM400 per month to support her family and a 19 years old school-going sibling. To try and supplement their income she started scavenging 4 months ago.

Our source told us that according to the ladies, although they keep some of the salvaged items for personal use, they also try to use it to barter for foodstuff such as rice with the neighbours or with the local grocery shop where they live.

As they do not own transportation, they travel to the recycling centre in Borneo Development Centre by bus, which is about 5kms from Kampung Stutong Baru.  It is not believed that Taib referred to this form of ‘progress and development’ when he lectured his supporteres on launching “an all out battle” on the opposition, who are calling for more fairness in the distribution of Sarawak’s wealth. 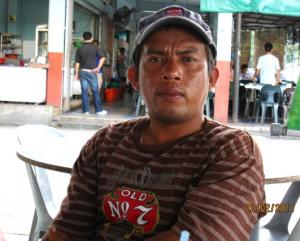 Has struggled with 4 children, 3 disabled one now dead.

One male scavenger was Hipni bin Bahdi, who is 35 years old. Unlike the others, he lives in Kampung Tabuan Hilir. He has 4 children; 12 yrs, 6 yrs, 4 yrs and 3 yrs. The 3 youngest has neurological deficiencies. Arising from it, the 6 year old died in April last year.

Receives RM300 monthly disability allowance for the children. Aside from his wife (34 years), he also supports his 64 year old mom and 28 year old brother who suffers from a hole-in-the-heart. Has a night job barbecueing Satay for RM25 a night. Aside from scavenging from the recycling centre in BDC, he also scavenges from another 3 locations as he owns a motorcycle; Kenyalang, Tabuan Laru and 3rd Mile.

These are the people forgotten in the so-called 30 years of ‘progress and development’ by BN.  One woman told us that her family had been pushed out of their home in Kotoa Samarahan when the state took their land for a development scheme for which they received minimal compensation – she said she had never seen the MP for her area, Sulaiman Taib, son of the Chief Minister.

There are nearly 10,000 such squatters in Sarawak and many more in resettlement schemes after losing their lands to ‘progress and development’.  Nearly all have discovered that life in a resettlement is costly and hard and that there are huge expenses demanded by the government, but no jobs to pay for them. 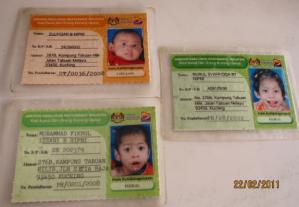 If Taib returns to office and starts rolling out SCORE, then many tens of thousands more Sarawakians will face the same disastrous fate as these squatters and re-settlers.  However, as BN has failed to register three quarters of the people in so many of the areas that stand to be affected, these people will have no chance to vote one way or the other!

His his speech Taib had the cheek to quote Abraham Lincoln on democracy, “Government of the people, by the people, for the people”.  In fact, as everyone knows, Sarawak is governed by the Taibs and only for the Taibs and most other people don’t get a look in!