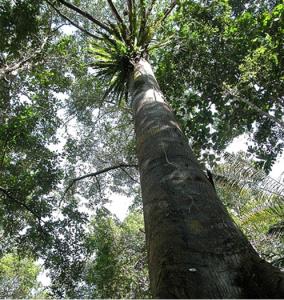 With breath-taking arrogance Taib has handed a huge area of land to a company controlled by his sister in his own constituency!

Saradu Plantations was given 8,000 hectares in Balingian over the period 2004 – 2009.  Most of the land was grabbed from a precious remaining forest reserve, Setuan Besar Forest Reserve, in the area near Bintulu.  The rest of the land was taken from local communities in violation of their Native Customary Rights!

Managing the deal, according to the Land Registry, was none other than Taib’s own sister Raziah Mahmud /Geneid.  She was controlling the matter from the offices of the company in which both she and Taib himself hold shares, Kumpulan Parabena Sdn Bhd.

The tell-tale telephone number listed in the registry is the same number that has been used to handle dealings with a string of other related companies, which have taken lands totalling a greater area than the whole of Singapore in just the past few years.  It it the number of the Kumpulan Parabena office in Jalan Sungai, Kuching.  The number is Kuching 082-423 877.

Raziah in charge - and working from the offices of Kumpulan Parabena!

Communities kicked out as usual 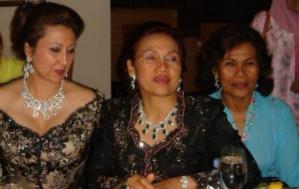 The recent copy of the register (above) makes plain that officials are still in the process of producing a provisional lease, yet this clearly did not stop Saradu from invading NCR lands in 2007 to cut through their roads into the forest.

4 Iban villages and a number of Melanau communities were affected.  Matek Anak Geram told Sarawak Report that his sago plantation in Kuala Balingian, on which his community based their livelihoods, has been destroyed.  Clearly, this was of no consequence to the high-living millionairess Raziah or her business partners, who were soon to demonstrate that they had the forces of law and order, if not the actual law, on their side.

According to NGOs the Melanau villagers, who belong to the Mahmud’s own ethnic community, were discouraged from complaining by outrageous claims on the part of their Pengulu and headmen, all controlled by BN.  The villagers were apparently told that any complaint about Raziah’s land snatch would amount to ‘going against the government’ and therefore be dangerous rebellion.  Worse, they were told that, because Pelitia is a state body, to complain about it would somehow be ‘going against Islam’.  Pelita is the Land Custody and Development Agency, chaired by Taib, which handed the land to his sister’s company.  Is this the way the ‘religious’ Taibs seek to exploit their own people?

Forces of law and order? 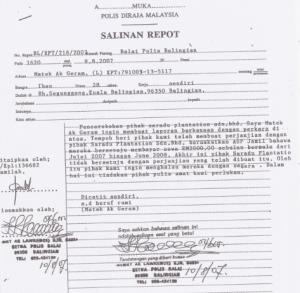 Police reports made, but ignored.

Matek Anak Geram and fellow villagers complained to the police about trespass, complaining that Saradu was not even prepared to pay for their use of the land.  However, they claim their complaints were ignored.

On the other hand when, after filing a court complaint in 2008, the kampongs mounted a blockade against the plantation-workers they sparked a brutal reaction.  Matek was arrested in an early morning raid by 10 armed police officers and thrown into a cell, charged with the ‘offence’ of restraining the oil plantation workers.

Matek, who is 31 and has two children, described to Sarawak Report how the arrival of the oil palm plantation has destroyed the communities’ livelihoods in numerous ways, polluting their river, killing their fish and pouring chemicals into the water and land.  He says that with the forest also destroyed they have lost their access to all the jungle products and that very many, very big trees have now been taken.  He has been forced away to the city and works as an NGO campaigner to send back money, meanwhile his relatives who once had their own farms now have to work as ‘coolies’ for others.

What was till recently a last remaining area of lowland forest in Sarawak is now wantonly destroyed – as satellite pictures now clearly show.  The local Iban protesters, who have fought for their heritage, say they have suffered attacks by gangsters and frequent police harassment as their case progresses through the courts.  Meanwhile, the ‘development’ has continued.  The profit to the Taibs is clear to see.  One of Saradu’s main shareholders is a company called Organic Treasure, which belongs mainly to Raziah and her husband Robert Geneid. 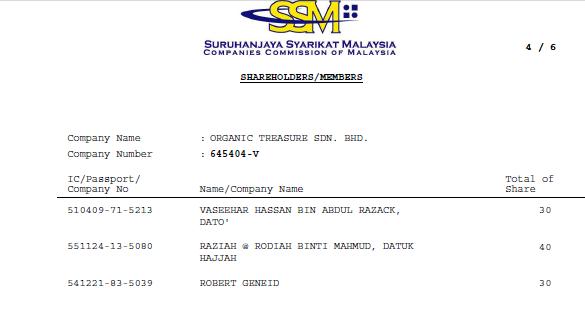 No surprise – Raziah pays lower than the minimum wage!

Meanwhile, Taib’s own constituents in the area have, as usual, seen none of the benefits of such ‘progress’ and felt all of the pain. Matek explains that the plantation refuses to offer even their menial jobs to the local people, preferring to import Indonesian workers.  A pattern repeated across Sarawak.  Matek also reports that the workers on the plantation have been receiving a base rate of RM9 per day, rising to RM15 for senior workers!  This is well below the minimum agreed wage of RM22 a day, set by the Indonesian Consulate.  Shame on the Mahmuds for hiring foreign workers instead of their own constituents and shame on them for not even paying half the minimum agreed wage! 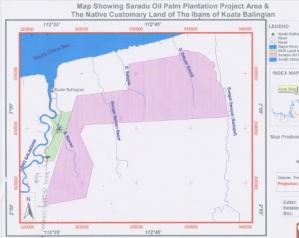 Saradu is a large slice of Sarawak handed to his own sister in his Bintulu backyard.

Are there no limits?

Sarawak Report is left wondering at such arrogance by the Chief Minister towards his own people and his own voting constituents.  Has age dulled his political senses or has the effect of 30 years in power been to leave him believing he can do anything to anyone?

As, everyone knows, the Chief Minister has been losing case after case as Native Land Rights disputes have gone through the courts in recent months.  Yet he fails to take action.  Instead he prefers to contest and appeal against the cases he has lost, forgetting there is also a Court of Popular Opinion that is judging him also and will soon be delivering its verdict!

The Saradu Court Case is due to be heard in Miri in coming months.  Meanwhile, the lawyer representing the 4 Iban villages who are standing up to the Saradu land grab, PKR’s State Assemblyman for Kuching, Dominique Ng, has his own analysis of the problem with Taib.

“The Taibs’ family greed knows no limit and is beyond shame. They will steal, and steal, and steal again, for as long as they can, until they are sacked or drop dead. They will continue to rape and pillage Sarawak until one of these happen!” he has told Sarawak Report.

Clearly, Taib thinks that such threats as “If you do not help us, we will not help you”, made by George Chan, will have the magic effect of bringing his constituents round, along with the current standing offer of RM100 per household delivered by Alfred Jabu.

Yet, in 30 years what has the Chief Minister done for his constituents in Kuala Balingian?  The Chief Minister should remember that his sister has just one vote and that Sarawakians are not stupid.