Greenpeace Speaks Up In Support Of The Vet Taib's Assets Campaign! 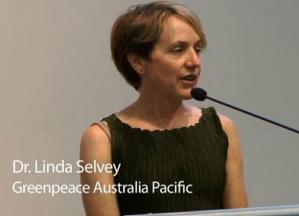 Dr Linda Selvey, Chief Executive Officer of Greenpeace Australia Pacific, has written to her Prime Minister to demand an investigation into Taib’s assets in Australia

The Australian branch of the highly influential international environment organisation Greenpeace has stepped in to support the campaign to investigate Taib’s assets abroad.

The Chief Executive Officer of Greenpeace Australia Pacific, Dr Linda Selvey, has personally written to Prime Minister Julia Gillard, backing requests by the Bruno Manser Foundation, PKR and Sarawak Report for an investigation into the Taib family’s string of investments in that country.

These include investments by Hamed Sepawi’s Ta Ann in a major logging concern in Tasmania, as well as numerous companies and properties owned by the Taibs, Taib’s brother in law, Robert Geneid, and related companies and assets. 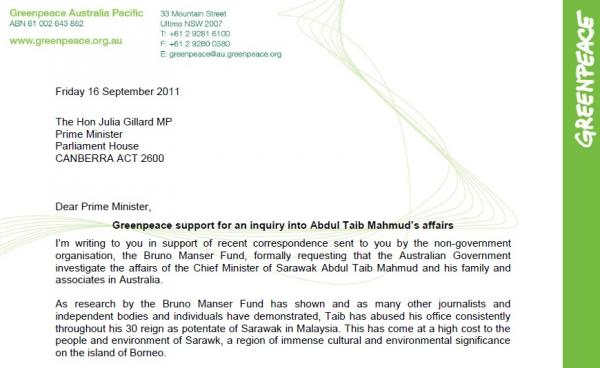 Greenpeace support for an enquiry into Taib Mahmud’s affairs

Dr Selvey states in her letter:

“As research by the Bruno Manser Fund has shown and as many other journalists and independent bodies and individuals have demonstrated, Taib has abused his office consistently throughout his 30 reign as potentate of Sarawak in Malaysia.  This has come at a high cost to the people and environment of Sarawak, a region of immense cultural and environmental significance on the island of Borneo”

“There is significant evidence to indicate that the Taib family might have laundered and reinvested large amounts of money, procured through corruption in Australia”

Pointing out Australia’s obligations to identify and address international corruption under the United Nations Convention against Corruption (UNCAC), the Greenpeace Chief Executive goes on to urge Gillard to direct the Attorney General’s Department to initiate a comprehensive investigation into the conduct and affairs of Taib, his family and associates on the basis of the material provided by the Bruno Manser.

Dr Selvey ends her letter by calling on the Australian Government to “stand up for the rights of the people of Sarawak to protect their culture, their land and their environment”. 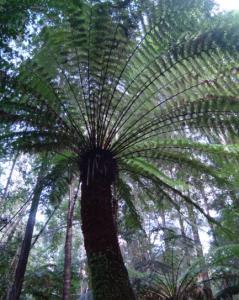 Tasmanian tree fern - unique, slow-growing and endangered. This is being destroyed by the clear felling in Tasmania to provide wood for Ta Ann

Equally hard to ignore will the the backing by another of Australia’s major environment organisations, the Wilderness Society, for the stand being taken against Ta Ann’s logging of virgin jungle in Tasmania.

Ta Ann has been at the centre of destruction and controversy in Sarawak.  A devastating report this week by the local Huon Valley Evironment Centre has now catalogued the company’s destruction of areas that the Australian Government has been trying to protect in Tasmania.

Even more shocking is the revelation that the wood logged from these operations is being marketed to consumers in Japan as ‘eco-wood’, claiming to be environmentally friendly and made from plantation wood.

Pro-logging politicians have attacked and criticised the report and Ta Ann’s Chief Executive in Tasmania, David Ridley claims he has identified ‘at least 50 mistakes’ (which he has yet to publish).  However the Wilderness Society has said:

“We share the concerns of local environmentalists that wood from Tasmania’s unique forests, including its oldgrowth forests, are being marketed as eco-friendly building options in places like Japan,”  [Wilderness Society statement]

Given that the Executive Chairman of Ta Ann Sdn Bhd and its major shareholder is Hamed Sepawi, Taib’s cousin, there are also concerns about the legality of the investment in Ta Ann Tasmania. 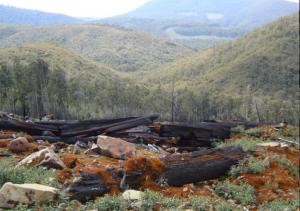 An area earmarked for Ta Ann logging. Only 10% of the wood felled by this clear cutting is used for Ta Ann’s mills. Most of the remaining 90% is wasted – it is left and burnt.

Sepawi, who is generally acknowledged to be one of Taib’s key business proxies, is at the head of numerous Sarawak-based companies, which have received million upon millions of ringgit worth of concessions, contracts and licences.

All thanks to the Chief Minister, who also acts as Finance and Plantation and Resources Minister.

So far, however, pro-logging lobbyists have concentrated their attacks on the advertising around these reports.

Complaints by the logging lobby

First they attacked an advertisement promoting a talk by the Editor of Sarawak Report.  Next they attacked the advertisment below, which pointed out that the real lies are contained in the sales promotions which are describing Ta Ann’s products as eco-friendly. 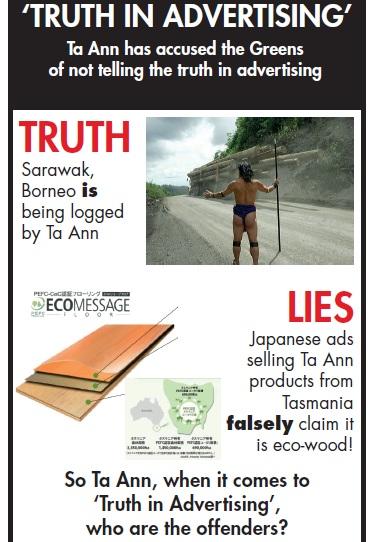 Advertisement for the expose on false advertising of Ta Ann’s wood in Sarawak Report, caused complaints by loggers. But they have yet to address the accusations.

The local Examiner newspaper reported that the State Director, Sam McQuestin had written to the Australian Electoral Commission requesting an investigation into the ad.

The commission should bear in mind that it was Mr McQuestin’s government which first invited Ta Ann into Australia giving away $30 million in subsidies to the company, which provides less than 100 local jobs.

So far, Ta Ann Tasmania is yet to make a penny in profit for the Australian taxpayer. Neither has the state owned Forestry Tasmania, which is supplying Ta Ann with its environmentally destructive logs at rock bottom prices (thanks to the deal set up by Mr McQuestin’s government).  Forestry Tasmania is in fact losing heavily on the deal.

So, Tasmania is being destroyed by an industry that is losing everybody money… or so it seems.  Surely this is the issue that should be concerning politicians right at this moment?

It is also time that the logging lobbyists answer the main concerns about logging in old growth Tasmanian jungle by Ta Ann and misleading ads about Eco-friendly wood, instead of making ill-founded complaints of their own.

Why is it that they are focusing on the ads and avoiding the main issues?