"They Put Me At Risk" - Xenophon Sues! 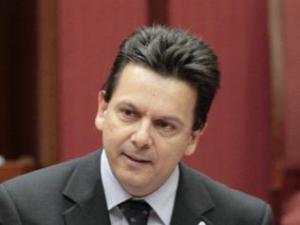 The Australian Senator Nick Xenophon has confirmed to Sarawak Report that he fully intends to sue the New Straits Times, despite the newspaper’s grovelling apologies yesterday.

It means that Malaysia’s abuse and manipulation of the media has become an issue across three continents since the weekend, with the BBC and Al Jazeera also opening enquiries into censorship.

The New Straits Times, which is controlled by Malaysia’s ruling party, UMNO, was one of a number of news outlets that had participated in a criminal defamation of Xenophon, as part of a crude attempt to create ill-feeling against him after he attended the Bersih 3.0 rally.

The papers coordinated in deliberately misquoting a speech he made to the Australian Parliament back in 2009, to give the impression that he had called Islam a criminal organisation rather than a religion! [see the report they later tried to hide]

In fact, Xenophon had not referred at all to Islam, but had instead been criticising the Scientologists and their money-raising tactics.  The papers just substituted the word Islam instead of Scientologist! 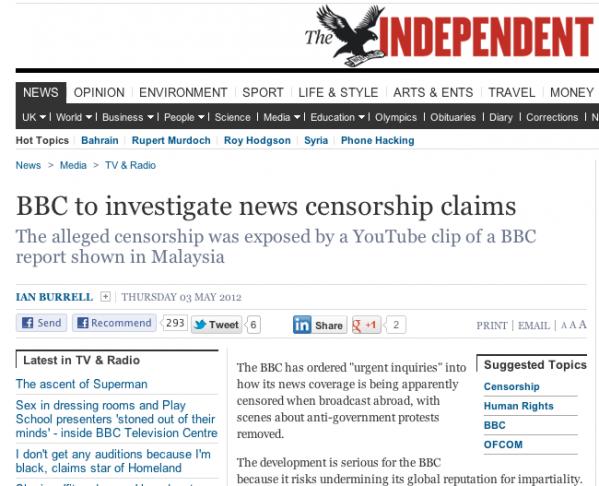 UK reports on Malaysia's crass censorship of the BBC yesterday

Speaking to Sarawak Report a short time ago, Xenophon, a barrister, made clear that he was perfectly aware of the threat to his personal safety resulting from the organised and malicious defamation.

In the current period of religious extremism in some quarters, the publicising of such reports against any individual could certainly make them the target of hatred and violence.  Xenophon made clear he believes that UMNO itself coordinated the defamation attempt:

“I think I pissed them off.  I called them an authoritarian regime and was caught up in the Bersih demonstration.  This was to try and damage me and Anwar by association.   By doing so they put me at risk” [Senator Xenophon]

The Umno papers had obviously hoped to get away with the libel, after all false accusations have become an established part of the party’s political tactics against domestic opponents.  However, once the matter had been picked up by the Australian media the gravity of the situation became clear to the NST, which has been attempting to back-peddle with unreserved apologies and retractions. 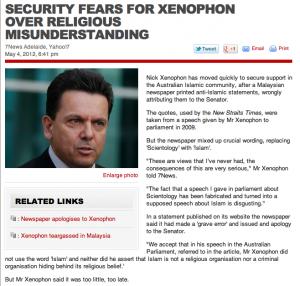 Full coverage in the Australian press as Xenophon gains the support of Muslim groups back home.

Xenophon has now made clear that belated apologies are not enough.  The misquote was also circulated in Malay language publications and in some circles such accusations are little different to placing a “Wanted” poster over somebody’s head.

To compound the attack, the UMNO newspapers also accused Xenophon of being a campaigner for gay marriage.  Homo-sexuality is illegal in Malaysia and UMNO have sought desperately to pin the ‘crime’ on the opposition leader Anwar, without success.

In fact, in his speech Xenophon had merely deplored that the Scientologists had pressured people to disown their own brothers and sisters, because they were gay.

The New Straits Times and UMNO’s best hope in this case lies in the fact that it will be tried in a Malaysian court.  Anywhere else, and the consequences would be disastrous for a publication that had deliberately and so dangerously misquoted an officially recorded speech in the Australian Parliament!

But, this incident is one among many that will be seen as exposing how stupid and lazy Malaysia’s ruling regime has become after 55 years of dictatorial rule.  More than anything it demonstrates how decision-makers no longer have to think particularly hard, because their crimes and blunders are continuously covered up, excused and ignored, while the subservient press keep cheering them on!

How else to explain why the extraordinary stupidity of pinning such an obvious, malicious and dangerous slander against a respected foreign politician wasn’t picked up by the ‘spin doctors’ in UMNO?

Just can’t learn from lessons of the past 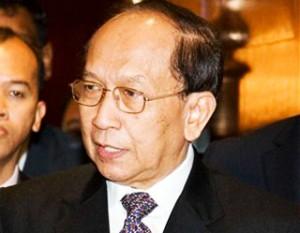 Malaysia’s Culture Minister, Rais Yatim, has appeared equally insensitive in seeking to defend the regime’s right to arbitrarily censor respected international news organisations, in order to prevent anything being seen that might reflect badly on itself!

His pompous comment to Free Malaysia Today, implying that “News Controllers” at Astro Channel are the best arbiters of what should and should not be in a BBC World bulletin, will impress no one outside of the BN elite.

“(Astro) has to be given credit for knowing which part of the news is newsworthy and therefore they should exercise that within their rights as a broadcasting firm,”[Rais Yatim]

To the contrary, Malaysia’s internet savvy population are well-aware that the ridiculous claims that all countries practice such abuses against press freedom, or that such interference is ‘necessary’ are false.

The main consequence of this posturing for BN has been to confirm to news organisations across the world that years of expensive western PR and advertising, targeted at giving the impression that Malaysia is a ‘reforming’ regime, are merely window-dressing.  UMNO is in fact tightening its repression, as it senses its own loss of power and control.

Today it emerged that this is not the first time that the BBC has clashed with Malaysia over censorship.  Back in 1994 the broadcaster was forced to cancel a news contract with Malaysia after they found their bulletins were being “crudely hacked”.

Former executive Ian Richardson recalled to Sarawak Report how he had been appalled when passing through KL to discover the level of ham-handed interference by news censors:

“Malaysian TV took certain BBC World bulletins on a trial basis, but soon after the trial began, I was passing through Singapore and spotted what seemed to me to be a mutilated bulletin going out on Malaysian TV. I used my laptop computer to log on to the bulletin running order and discovered that the top story – about riots in Indonesia – had been chopped out. Malaysian TV then admitted what had happened, but said it could not give guarantees not to cut out any future unfavourable stories about friendly neighbouring countries. So that contract worth $A1M a year went down the Swannee”.

It is more than likely that the events of the past days will result in a similar series of cancellations by the world’s top news organisations of their contracts with Astro.

Unless Malaysia is prepared to back down, and commit itself to refraining from any future censorship of this kind, the risk to the reputations of organisations like the BBC and Al Jazeera and CNN is simply not worth the millions involved.  It seems clear they will have to pull out of Malaysia once more.

Najib and BN will pay a separate price, because now the world’s top broadcasters have been forcibly reminded of just how repressive, stupid and untrustworthy Malaysia’s BN rulers have become.