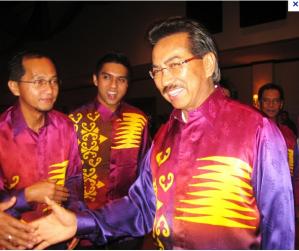 A complaint under Swiss criminal law has been lodged by lawyers against UBS AG bank.

It follows our devastating revelations about the bank’s involvement in the channelling of nearly a hundred million dollars of timber kickback money, linked to the Chief Minister of Sabah, Musa Aman.

We have demonstrated how the Hong Kong branch of UBS AG and its former ‘wealth management advisor’, Denis Chua, were involved managing every stage of an elaborate series of ‘layered’ accounts, which funnelled money from timber tycoons through a series of nominees, coordinated by Musa’s known “middleman” Chia Tien Foh (Michael Chia).

Yesterday, we showed how statements from UBS AG itself confirmed that money had been regularly drawn from a number of this web of accounts to meet the expenses of Musa’s two sons who were studying in Australia.  Some of these accounts were held in the name of Michael Chia himself and yet Musa has gone on the record claiming “I have no business association whatsoever with an individual named Michael Chia”.

The development turns the spotlight firmly onto Switzerland’s largest bank.

Assisting money-laundering is a criminal offence under Swiss law and it is also specifically contrary to the path-leading Wolfsberg Principles of which UBS AG was a proud founding signatory.  The Wolfsberg Anti-Money Laundering Principles for Private Banking were drawn up in Switzerland in 2000 under the auspices of Transparency International and UBS was one of eleven global banks who signed up to them.

“In early 2007, the Wolfsberg Group issued its Statement against Corruption, in close association with Transparency International and the Basel Institute on Governance…..Shortly thereafter, the Wolfsberg Group and The Clearing House Association LLC issued a statement endorsing measures to enhance the transparency of international wire transfers to promote the effectiveness of global anti-money laundering and anti-terrorist financing programmes”. 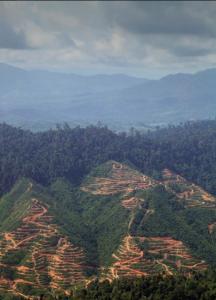 Sarawak Report now has in its possession evidence of numerous such international wire transfers relating to Musa Aman and his associates, which formed part of a Malaysia Anti Corruption Commission enquiry in 2008.

That enquiry recommended 40 charges be brought against Sabah’s Chief Minister for accepting tens of millions of dollars in kickbacks for issuing logging licences to timber cronies.

Many of these concessions were awarded in previously protected Reserve Forest regions and in areas marked out for international protection under the Heart of Borneo Treaty.

Others were on steep hillsides after contour maps had been deliberately distorted in the Forestry Department records, so that logging could be ‘legally’ permitted.

However, despite the evidence, the Attorney General, Abdul Gani Patail, Musa’s relative and political ally, has refused to allow the prosecution to go ahead.

The question now is why UBS AG, after all the information surrounding this case has failed to investigate or take action against possible money laundering through accounts linked to politically exposed persons in Sabah? 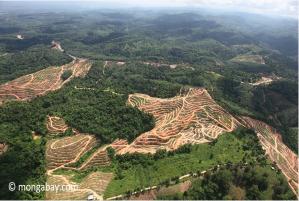 Wealth creation? Not for the vast majority of Sabah and Sarawak's indigenous peoples, who remain among the poorest in Malaysia

The complaint against UBS has been launched from the same Swiss City where the Wolfsberg Principles against international money-laundering were established.

The Swiss lawyer and compliance expert Monika Roth has launched the complaint to the public prosecutor on behalf of the Sarawak environmental and human rights NGO, the Bruno Manser Fund, which is also based in Basel.

The NGO believes the likelihood is that the bank will soon face criminal proceedings as a result:

“The Bruno Manser Fund accuses UBS of having breached its due diligence duties as defined by the Swiss Criminal Code and calls on Swiss authorities to take criminal action against UBS and those responsible for the bank’s relationship with Musa Aman. The Malaysian politician has been Chief Minister of Sabah since 2003 and is the brother of Malaysia’s Foreign Minister, Anifah Aman. He is being accused of having laundered over USD 90 million of corruption proceeds through a number of bank accounts with UBS in Hong Kong and Zurich. In April 2012, the Swiss Federal Office of Justice confirmed that Switzerland has given legal assistance to Hong Kong authorities over Musa’s ties with UBS”.[See full statement]

The NGO goes on to say that it has handed in numerous documents as evidence to the Zurich Public Prosecutor’s Office, which prove that Michael Chia, a close associate of the Sabah Chief Minister, organized large cash payments from timber companies with logging interests in Sabah to UBS bank accounts in Hong Kong.

It goes on to say that “from the same accounts, payments have been made to Musa Aman’s sons in Australia and to Mohd Daud Tampokong, a senior forestry official from Sabah”.

Beginning not the end of the affair

Musa Aman may have hoped that his denials and the assistance of his ally and relative Abdul Gani Patail could silence the investigation by Malaysia’s own corruption authorities.  However, now that the matter has been internationalised it looks likely that we have seen only the beginning of this affair.

The ball is now in the court of UBS AG, which has already indicated its concerns over the public perceptions resulting from this murky matter.