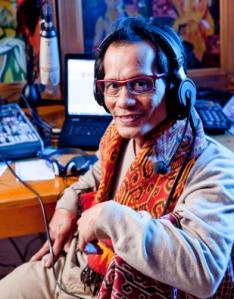 DJ Peter John Jaban has now made contact with his colleagues at RFS.  He called early today and admitted to running away, because he feared he would be hurt if he was questioned by the police.

“I can come to a police station with my lawyer, provided the police are not rough with me” he said, citing examples of police brutality against critics of the regime as the reason for his fears.

“I am fearful of what they will do in custody, when you are in their hands”, he added.

But for now Peter explained he feels safer lying low and he thanked everyone who has helped him and shown concern for him over the past few days.

He explained that he had acted on the spur of the moment when 3 people he knew spotted him and flagged down the car he was in, as he left Miri airport in the company of people who had come to help him through any attempts to detain him there.

“They were good Samaritans who helped me get away and I also want to thank Dr Teo and the kind lawyer Alan Ling who also came to assist me.  I am sorry I left so abruptly”.

Peter, who was described as tired and tense looking when he arrived at Miri, explained that his actions were caused by his level of anxiety.

Sabah police and immigration were ‘kind’

Despite these concerns, Peter went out of his way to stress to colleagues that the Sabah Special Branch and Immigration officials, who had interviewed him as he departed from KK airport had been ‘kind’, but had left him with the impression that he would be stopped again on arrival back in Sarawak:

“In Sabah the Special Branch Officer who interviewed me was very kind to me and let me go.  The immigration officer was kind too.  I would like to thank them for being very kind and polite.  It was only that during the flight I was so fearful that they would get me in Miri”.

Peter said there were a number of reasons why he felt that Special Branch would want to talk to him and why his passport and ID card are registered on the so-called ‘black list’ of people who will be stopped on border checks.

He says that as a former Government worker in the Land and Survey Department he knows that he has broken his employment terms by revealing information that was supposed to be secret.  On the other hand he says he did it to reveal corruption.

He is also fearful of being charged with ‘sedition’, given the reports lodged against RFS by BN supporters and the numerous accusations and attacks by BN politicians in the press.

Finally, he knows that he has been travelling in and around Sarawak avoiding border check points.  “I don’t know whether I can be charged with not doing the right things within the immigration act” he said.

Peter explained that after a long period away he had been desperate to spend time back in Sarawak, despite his concerns that he had angered the powers that be.  He has taken a number of opportunities to mingle with friends and family, but has continued to be wary of being picked up.

He now says that he is hiding and has not decided on his next move.  He is aware the police are looking for him following concerns at his disappearance, but says he wants to consult with his lawyers and friends before making any further moves:

“I want them to promise me I can appear in a police station provided they don’t harm me. I need to meet with lawyers and seek advice.  I am willing to face them, but don’t hurt me, don’t harm”, he repeated.

Radio Free Sarawak will continue its regular broadcasting daily from 6pm-8pm in Iban and Malay on SW15420kHz.