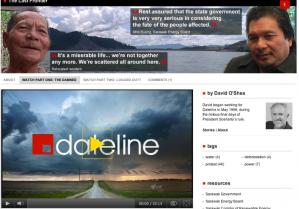 Prime Time TV in Australia makes a Date with Sarawak

Australia’s longest-running and highly prestigious TV current affairs programme, Dateline, has just devoted a full half hour show to the problems of logging in Sarawak and to Taib Mahmud’s crazy plan to build 12 more dams in the state

Their veteran reporter, David O’Shea, spent days filming in Sarawak and interviewing people who had been flooded from their homes by Bakun,

He also visited some of the villages which have been suffering from gangster attacks on behalf of logging companies. 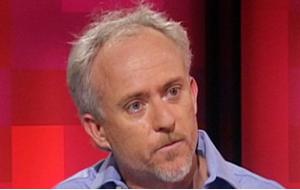 O’Shea features the Ukit people of Bakun, who have been reduced to living in their old homes, which are now floating on the waters of the gigantic lake which has flooded their lands.

He also interviews many villagers, whose timber is being ripped out by Ta Ann, the company owned and run by Taib’s cousin, Hamed Sepawi.

Later on the programme he challenges Sepawi and a Sarawak Electricity Board spokesmen about why they are driving through 12 more unnecessary dams without even conducting the proper consultation and impact assessments first?

Sarawak Report also took part in an interview about the corruption that is the real reason behind the building of these dams and the destruction of Sarawak’s great forests.  However, Taib Mahmud himself refused several requests to be interviewed.  Does he not dare to face tough questions from journalists whom he cannot control? 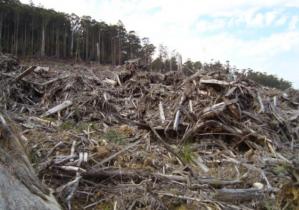 Australia has become increasingly embroiled in the controversial activities in the State of Sarawak in recent years through a series of ties that have been developed between Hamed Sepawi and the State of Tasmania.  These matters have been frequently highlighted on Sarawak Report.

To begin with, in 2008, Sepawi’s company Ta Ann signed a deal with Tasmania to log out large areas of its native forests, many of which had been earmarked for protection.  Outraged environmentalists then discovered that Sepawi was marketing this wood as environmentally friendly “eco-wood”.

Much of this wood was marketed in Japan, but the scandal also hit London during the recent Olympic Games, when it was discovered that Ta Ann had also falsely sold the flooring for the construction of the London Sports Dock, where basketball was to be played.  That contract was cancelled as were key contracts in Japan. 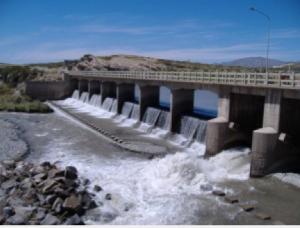 Dams – Hydro-Tasmania has now picked up a huge contract to consult on Sarawak’s dam projects. But, the risk of involvement in such controversial developments are raising questions in the state.

Meanwhile, in one of his many other roles as Chairman of SEB Hamed Sepawi has simultaneously engaged Hydro-Tasmania to help lead the construction of Taib’s planned wave of destructive dams, which will displace tens of thousands of people and destroy Sarawak’s remaining great rivers and jungles.