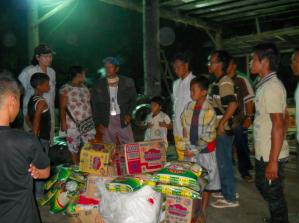 Thankfully the NGOs were able in the end to deliver food to the blockaders – our thanks to all donors to our appeal.

Police numbers are being increased around the Penan blockade at the Murum Dam. Yesterday, they announced that they had detained an NGO sympathiser, who was bringing food and declared that this humanitarian act was ‘incitement’.

“It is not wrong if he had sent the items to the Penans at their longhouse”, stated the local police commander.  This was possibly in recognition that the Penan have received no government support since their hunting grounds were logged in preparation for the dam and that half of their children are officially malnourished.

However, the officer claimed it was illegal to supply the protestors with something to eat directly.

Fears are now growing that there will be a crackdown on the blockaders, who are fighting for their human and indigenous rights, which are established under UN treaties signed by Malaysia.

The 8 villages launched the blockade when they learnt details of the leaked Resettlement Action Plan (RAP) for their community.  This plan had been kept secret during the 5 years of construction of the dam, despite the international protocols which say indigenous people should be kept fully informed and be in agreement with proposals affecting their future. 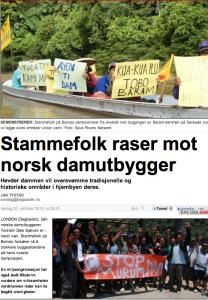 The RAP provides for compensation payments well below the poverty index for each family and for just four years only. The resettlement lands are also plainly insufficient.

As a result the Penan immediately set up their blockade and laid out their own demands.  These include RM500,000 for each family, equity in the dam and a larger and more favourable resettlement site that is not already designated to oil palm concessions.

At first BN announced that the issue had been settled.  The assemblyman for the area, Liwan Lagang, had not bothered to undertake the hard journey to the region himself to find out the actual situation on the ground.

Now that it is clear that the blockade has not been dismantled, Lagang and other BN ministers have started complaining that the Penan must be responding to “incitement”, on the basis presumably that these people are unable to think for themselves.

To the contrary, the Penan are doing what anyone would do in their circumstances. They are fighting for survival.

For years, they say, they were given confusing promises and assurances about what might be done for them, but in fact they were kept totally in the dark about BN’s actual resettlement plans.

Victims of previous dam resettlements, such as the Ibans of Batang Ai and the peoples of Bakun know only too well how false promises from BN have disappeared into thin air.  The Penan of Murum now found out the same and the tens of thousands of people, who will soon be displaced by Baram, Baleh and all the 12 other planned dams, should take careful note of the tactics in store for them also. 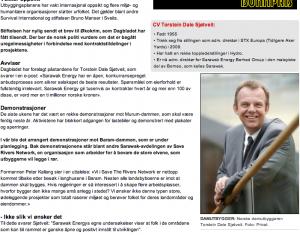 Under Norwegian law any national caught up in corruption anywhere in the world can be prosecuted in Norway – watch out Torstein!

In a Question & Answer document released to NGOs this week Sarawak Energy’s millionaire Chief Executive, Noway’s Torstein Sjotveit, has countered that the Penan have been fully consulted and came to an agreement on their compensation.

We therefore ask why there have been no signed documents in the Penan language to prove such a thing and why all the Penan are still saying that they were confused rather than consulted during visits by his executives and that promises were made that do not appear in the resettlement plan?

And if the Penan are so happy with the miserable settlement offered by the Government, why was it kept secret and why are they protesting now they have seen it?

Torstein Sjotveit’s claims are now being analysed by NGOs who are testing them against international protocols.  Meanwhile, the Chief Executive of Sarawak Energy has appeared in his own Newspapers in Norway concerning corruption claims. 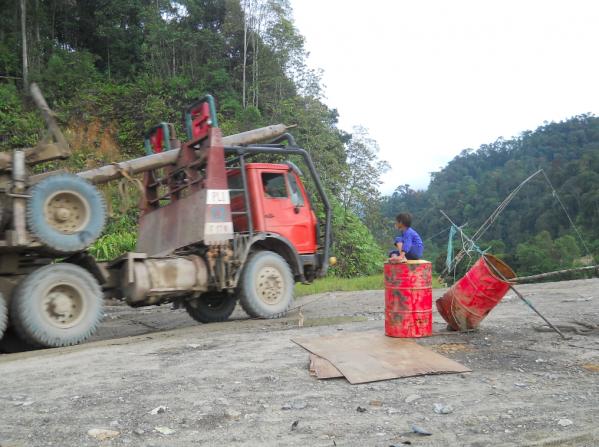 The Penan are holding out on their blockade into its 4th week. They need food.

The Newspaper Dagbladet reported on Saturday that that the Bruno Manser Fund has lodged a corruption complaint in Norway against Torstein Dale Sjøtveit, the CEO of Sarawak Energy Bhd, with Norway’s anti-graft watchdog, Økokrim, over irregularities related to the so-called “Sarawak Corridor of Renewable Energy” (SCORE).

Furthermore, in January 2012, three Malaysian banks issued Islamic bonds worth MYR 2.5 billion (USD 803 mio.) on behalf of Sarawak Energy. One of these banks was Kenanga Investment bank, a subsidiary of K&N Kenanga Holdings, which is a joint venture between the Taib family and Deutsche Bank.” [Bruno Manser Fund statement] 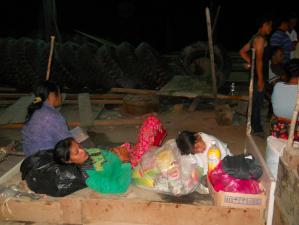 Family affair – the blockaders are now taking it in turns and many have gone back to their villages. But on site there are exhausted women and children.

Mr Sjotveit, who earns a multi-million dollar salary, has responded that all Sarawak Energy contracts are conducted on an “open competitive tender basis” and that the “question of ownership” of these companies was “completely irrelevant”.  The NGO has responded by requesting the details of the transactions.

If Taib choses to send in his police to arrest the Penan and forcibly dismantle the blockade or to prevent food and humanitarian provisions being brought to the blockaders, many of whom are women, it will not go unnoticed.

Sarawak has failed to even begin to abide by the protocols of transparency, consultation and agreement governing the building of dams under the UN Declaration of the Rights of Indigenous Peoples and numerous other protocols that bind Malaysia and most other countries, as anyone reading this blog will know.

As a result, the protests by the Penan are wholly legitimate, whereas the actions of the BN government are not.

Next year in May 2013 the International Hydropower Association is scheduled to hold its conference in Kuching, supposedly to mark a model exercise in corporate and social responsibility towards dam building, which is how Sjotveit and his colleagues from Hydro Tasmania have been attempting to portray Murum and Sarawak’s other planned dams.

Violence towards protestors will not fit in with this already unconvincing image. 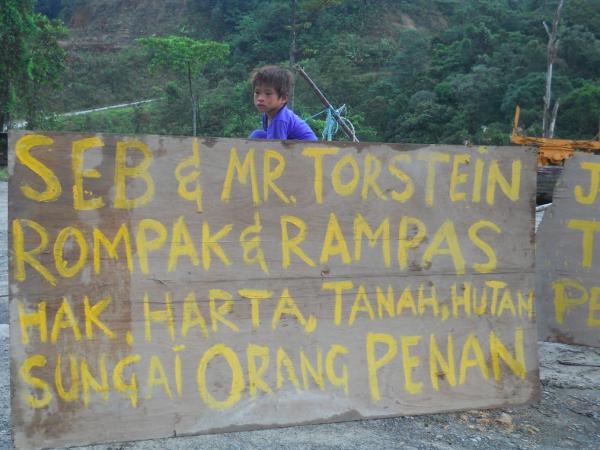 Humanitarian aid is not to be allowed, say police