We Are Still Here - Stop Lying That Our Issues Are Settled! 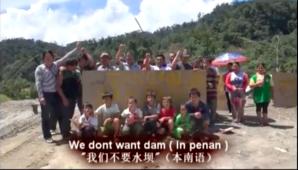 Taib’s BN Ministers have been going blue in the face, complaining “instigators” are behind the Murum blockade and saying that all is now settled with the Penan at Murum dam.

Top side kick and very unaccountably wealthy Planning Minister, Awang Tenga has been leading the attack alleging that the community are now happy with the plans that were made in secret by the government for their future.

Yet, who would be happy to be thrown out of their homelands and removed to a poor area already planted with oil palm for a miserable compensation of RM 850 lowering to RM500 per family per month for only four years?

After this there is to be no compensation, according to the leaked plans.  Taib might have well have signed a death warrant for the Murum Penan.

Three weeks and we ARE still here!

So, of course the Penan are still contesting the miserable resettlement plan, which caused them to start their blockade and today Day 22 they are still out there blocking the road to the construction site, despite attempts by Ministers to say that the blockade has been abandoned.

Watch the video recently shot in the area and then decide who is telling the truth – ministers who say that the Penan have given up their protests or the journalists and NGOs who have visited the site and report that they have not. 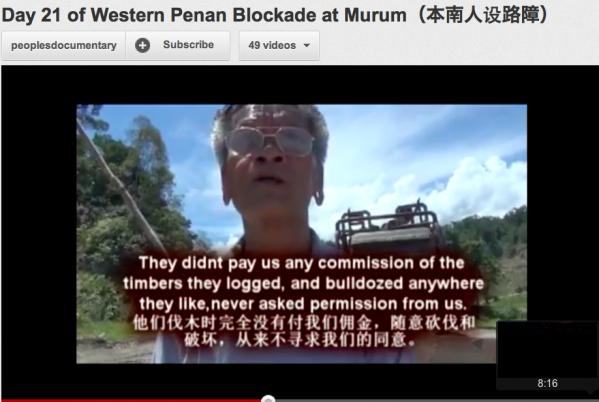 Murum may be remote, but in this day and age Taib and his government really should not attempt to get away with such untruths.  Not only because it is wrong, but because it can be proved to be wrong.  Journalists and film crews from all over are now coming to record that the protest is still very much alive and to show that once again you cannot trust the word of Taib and his minister.

Meanwhile, Taib’s favoured newspapers are making clear who is going to make money out of the dam. The Chief Minister and his side-kicks were off earlier this week raising money for the dams in Arab States in return for “generous incentives for investors”.  What about some generosity for the natives of the land itself? 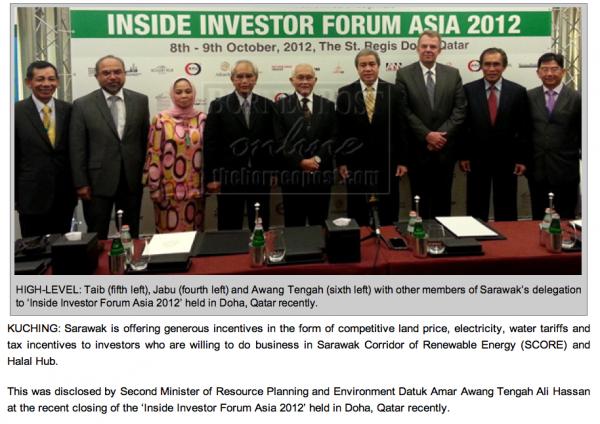 Making money out of what belongs to others – just a normal day for Taib Mahmud, lining up with his top culprits, Jabu Tengah and Norway’s Torstein Sjotveit

When asked about the Penan’s perfectly reasonable request for a cut of the profits of the Murum Dam this week,  Awang Tengah, just back from the lavish Middle East trip accompanying Taib, Jabu and his foreign helper, the Norwegian Torstein Sjotveit, expressed surprise.  Of course not, that would not do!:

“Awang Tengah described it as “very unreasonable” for the Penans to demand for equity in the Murum Dam project.

“Wow, they demand that they should have equity in the project. What is that?”

On speculations that a private company or two had alienated land surrounding the resettlement area, he replied that it might be true.

“It is just a maybe. I am not too sure as I have to check.”[Borneo Post]

Why not?  This dam enterprise is advertised as being for the benefit of the people.  Yet the only ones making money are Taib Mahmud and his family, who have been awarded multi-million ringgit contracts for providing power cables, building roads and providing cement.

Why is Awang Tenga allowed to be so rich when people get nothing from their lands?

Bully boy Awang Tenga of course has no thought for the grinding poverty he has decided that the Penan should be condemned to.  He does not care that his Planning Ministry has allowed a situation where others have also taken the lands on which the Penan must try to learn to become farmers!

After all, he is making billions out of this and other projects in his key position as Taib’s henchman, with a grand new mansion in Perth Australia to his name.

Why should the Penan not receive equity in Murum?  Plenty of other communities in areas which have been flooded for dams have been compensated out of the profits for their sacrifice.  So why is it so outrageous to demand similar benefits for the Penan who have received no choices in this matter (which is a violation of their rights under international laws governed by the UN) and who have received nothing for their timber or their lands?

Who says we gave up?!

The fact is that the Penan at Murum are in no mood to give in to Taib or to be afraid of Taib any longer, because he has made them too desperate.  If you push people to the edge of their very existence and then tell them to make do with nothing, while you build yourself palaces and jet around the world in luxury, then they lose any wish to negotiate.

Throughout the film shot by visitors just this week the great lorries of Taib’s crony timber company Shin Yang rolled past the Penan as they tried to give their story.  What better illustration of the theft from Sarawak and from the people of Sarawak than these passing timber lorries? 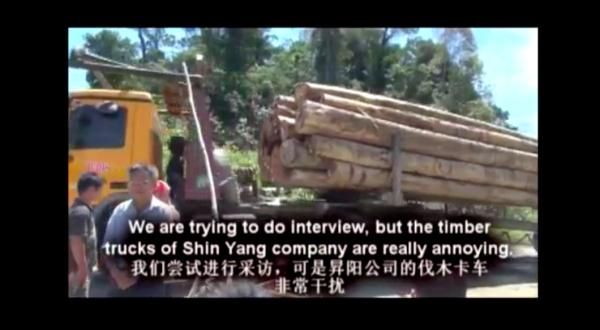 Our thanks to the kind supporters who have contributed to our on-going Murum appeal.  So far this has given us vital funds to provide rice and other provisions to help the brave protestors who have said they will not cease to demonstrate until they are given the dignity they deserve and are treated according to their rights under international law.