Najib Denies Some Things But Not Others! 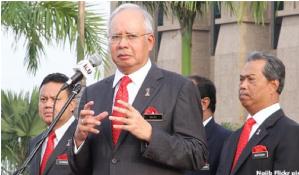 The Malaysian Prime Minister, Najib Razak, chose to make an interesting denial earlier today, in response to our report about the rumours which have been circulating, that he suffered a minor stroke.

He was pleased to say that the reports are wrong and urged Malaysians not to read anything that has not been licensed and censored by his regime.

“Don’t listen to the blogs please” he pleaded, neglecting to acknowledge that he clearly had himself.

So, now that the Prime Minister has shown himself to be fully aware of all that is being said and written in the non-censored press and ready to issue denials when it suits him, can he turn to some even more pressing topics which are urgently awaiting his comment?

Abducted by security forces and blown up by C4 explosive. Najib should deny allegations that Altantuya was his mistress and issuing threats of exposure before her murder.

Over the past few weeks Malaysia has been left amazed and outraged at the PM’s utter silence over matters of such a scandalous nature that they cannot possibly be legitimately ignored.

For, the Prime Minister himself has been openly implicated in an extraordinary cover-up of a sex and murder scandal, linked to a corrupted arms deal, in all of which it is alleged Najib had a highly intimate personal involvement.

Why did the Prime Minister not take the opportunity when confirming his good health to deny these matters as well?

In fact, why does he not go further and initiate an open enquiry to clear all these allegations up?

Indeed, if he is so confident that the facts exonerate him, why has he not also issued proceedings against the people who have raised these allegations against him?

As an editorial figure at one of the news portals which have been reporting these matters has put it:

“We have been hounding him and Rosmah [for comment] over the past week but with little success”.[online news journalist]

Why does the PM always buy off his accusers instead on answering their allegations?

Look after your friends? Deepak claims he was ruined by doing business with Najib’s family

The tight-lipped PM has made one significant gesture over this period of recent revelations.  His Defence Ministry made a surprise announcement a fortnight ago that it will be buying up a company, Astacanggih Sdn Bhd, belonging to his main accuser, a former friend and business associate Deepak Jaikishan, for RM30 million.

The ministry will also buy for RM150million of taxpayers’ money the 200-acre site owned by UMNO Wanita Chief, Raja Ropiaah, with whom Deepak had done a complex deal, which he has been complaining cost him a lot of money in bribes to Najib’s family.

Given that it is Deepak who has been making all the recent allegations against Najib, this makes a denial by the Prime Minister that he was in any way attempting to buy his former friend’s silence all the more pressing.

After all, this is the second time in this long-running murder saga that the Prime Minister appears to have chosen to suppress the evidence of accusers rather than test their testimony in open trial.

On the first occasion a statutory declaration made by a former policeman of good reputation, who was acting as a body-guard to the Prime Minister’s personal negotiator in a deal to buy French submarines in 2008, supplied jaw-dropping detail of sex, murder and corruption at the original trial into the abduction and murder of the Mongolian model Altantuya Shaaribuu.

Bala – he retracted his retractions.

P I Balasubramaniam testified that he had learnt both from the murdered model and his employer, Razak Baginda (who was Najib’s right hand man on the Scorpene Submarine deal) that Altantuya Shaariibuu had been the then Defence Minister’s mistress and was causing trouble and asking for a pay off over kickbacks from the deal.

Instead of denying the matter (after all this was a vicious and astonishing allegation if untrue, given the model’s subsequent murder by security forces, who have admitted to the crime but never provided a motive to the courts) Najib stands accused of buying Bala off.

By the next day Bala had retracted all his allegations and disappeared.  He reappeared a year later in the UK to say that he stood by his original allegations after all, that he had been pressured to retract and that he had not received the full pay-off he had been promised for changing his story and taking himself into hiding in India.

Lady Macbeth? Time for Rosmah too to deny her role in this Shakespearian drama.

Now finally two years later again and on the brink of an election, carpet salesman and Najib’s former family friend, Deepak Jaikishan, has suddenly emerged to confirm Bala’s version of events, saying that he had been called by Najib’s wife Rosmah in the middle of the trial to organise for Bala to retract his testimony and pay for his disappearance.

Deepak has given numerous interviews and produced a manuscript full of cringe-making details of these allegations.  Yet again, neither Najib nor his wife Rosmah have said a thing about the scandal that has had the whole of Malaysia gasping with astonishment.

When more allegations came out, backed by receipts, indicating that Deepak had bought Rosmah diamonds worth tens of millions of ringgit to smooth the various deals in which he was engaged, again there was nothing but silence from the couple.

“I did not have sexual relations with that woman” – discouraging precedent?

To the contrary, the Defence Ministry suddenly rushed to pour money into Deepak’s hard-pressed company!

Therefore, we are glad that the Prime Minister can assure us he is in physical good health; but what use is that if his reputation is in tatters?

All of Malaysia is waiting for him deny his role in this extraordinary real life drama, which currently rivals Shakespeare’s masterpiece Macbeth in placing him and his wife at the centre of a hopefully imagined web of power, sex, murder, bribery and cover-up!

There is no sign of any of these allegations ending any time soon.  Today Najib’s chief tormentor and accuser, former friend Deepak himself, has announced he is planning a series of nine more press conferences “exposing every detail in the saga involving the tampered statutory declaration, the Raja Ropiaah Abdullah land issue and his dealings with the family of Prime Minister Najib Tun Razak”.

Come on Prime Minister Najib, deny the lot of it if you please – it is the only way you can put an end to it (as long as its not true)!