The Main Plot Is Against Najib!

As BN’s juddering coalition splutters and stutters towards the election, which it has been putting off but can no longer avoid, all the whispering is about revenge.

Najib is getting the blame in UMNO for the falling poll ratings and party plotters have been talking about how to deal with him and regain full control of Malaysia, which they once managed like their own personal vehicle. 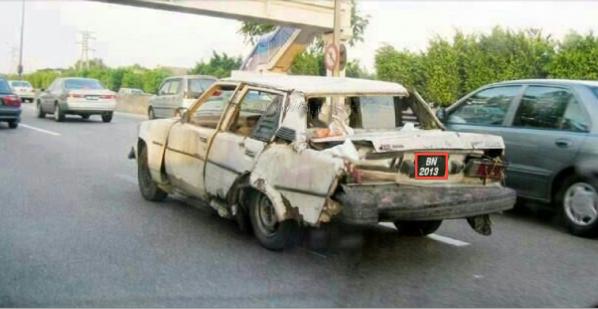 Unlucky sight for BN on the road outside Kuching? After 50 years in government the collapsing UMNO vehicle is also   trying to keep on the road for its 13th General Election in the year 2013

A spent vehicle guided by a back-seat driver?

Front man for the election, but for the chop right after

Sarawak Report has already detailed an advanced plot to get rid of Taib by his closest insiders, but the real big story is that the same fate is being planned against Najib, also for the moment the election is over.

This means that Malaysians could end up voting for one leader, but end up with a completely different character just weeks afterwards.

That character would be the far less popular, hard man, Muhyiddin Yassin, the current deputy.

Behind the manoeuvrings is Malaysia’s very own back-seat driver, Mahithir Mohamad, who can’t accept his own retirement.

Mahathir’s back-seat driving is no secret in UMNO

And backing him are UMNO’s party hard-liners, nostalgic to bring back what they see as a Golden Age, when they controlled everything in Malaysia and could crack down hard on anyone who dared challenge that power.

“Mahithir is running his own campaign plan”, explains one inside observer “and what he is telling people is that Najib is doing it all wrong, he is too soft.  He is saying Najib is too weak and Malaysia needs strong government”.

That there is such talk going round is widespread knowledge, as are the hard-line views of Mr Mahithir, who ruled Malaysia with an iron rod and removed the independence of the judiciary, press, police force and civil service in order to make sure his executive authority could not be challenged.

Malaysia’s former dictator kept his support by distributing favours, paid for by Sarawak and Sabah oil money, among his UMNO followers.

Ready to return with an iron fist. Mahathir is confident that Muhyiddin will bring Malaysia back to the way it was run

However, Mahithir was himself removed because this style of government had become plainly intolerable to Malaysians and UMNO needed to develop a different face to stay in power.

Badawi started the process and the resulting freedom saw the opposition doing much better in the 2008 elections.

But the UMNO hard-liners took this as their cue to claim Mahathir had been vindicated and it is well known that Mahathir himself was a prime mover behind the removal of Badawi shortly after that ‘disaster’ of democracy.

The tub-thumping Muyhiddin is their answer to Najib, who is seen as even weaker and more accommodating than Badawi, as he tries to show that Malaysia can reform and catch up with the world in terms of human rights and democracy.

Nothing annoyed the hard-liners more than the sight of the peaceful demonstration earlier this month, where hundreds of thousands dared turn out on the streets for the opposition, for once unmolested by the regime.  They would have preferred a crackdown and to hell with what the world thinks. 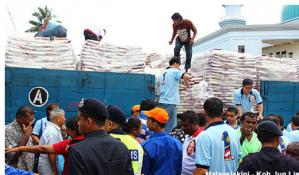 The tensions have put Najib between a rock and a hard place.  He is indeed weak and still forced to indulge in the corrupt practices that have sustained BN for so many years.

After all, once you have started a career in bribery and corruption you can never escape it and the same rule applies to political parties.

The PM’s own counter-rally of a few thousand supporters looked pathetic, with the handouts of rice telling the full story of BN’s lamentable relationship with its followers.

But, Najib is also sufficiently modern to realise that he cannot put the cork back in the bottle in Malaysia and that change must come.  This was the reason why BN had to dump Mahathir in the first place and the reason behind the political tsunami in 2008.

It is obvious that to crack down again now would cause dangerous and intolerable pressures that would explode sooner not later.

However, this is exactly Mahithir’s plan, say observers.  He wants to bring Muhyiddin to power straight after the election is over, through a revolt at the long-postponed UMNO convention, which will have to take place almost immediately.

The former leader, who commands everyone’s ear in the party, because he was regarded in being so successful hanging on to power and making them rich, is trading off the growing fears that the momentum is sliding away from the party each day that the election is held off.

“Mahithir is talking to UMNO leaders and state leaderships one by one.  He was actively doing it at the recent UMNO General Assembly in November, when all the delegates were complaining about Najib’s leadership, especially the uncertainty over the election.  He has been saying to them ‘I have my misgivings with Najib as well, but we need to be united until the elections’ “, explains a separate observer.

Mahithir’s plan is simple, use Najib’s more moderate image, which is 20% more acceptable to the voting public than Muhyiddin’s, to get through the election and then substitute him.  Muhyiddin is far the more popular character with hard-line party insiders and will win their votes at the party convention.

It seems not to worry UMNO one bit that this is effectively setting out to cheat the electorate by advertising a more palatable, if weak leader and then substituting him with a hard-liner with an agenda to crack down on democracy and freedom.

But, then UMNO have been cheating and bribing the electorate for years.

If the widespread talk about replacing Najib in this way is untrue, then we await BN’s denials once more and look forward to hearing Mr Mahithir and Mr Muhyiddin pledge their loyal and undying support for their party leader and Prime Minister both before and after the election.

BN should meanwhile bear in mind that such plots predicate an election victory that is looking less certain every day that passes! 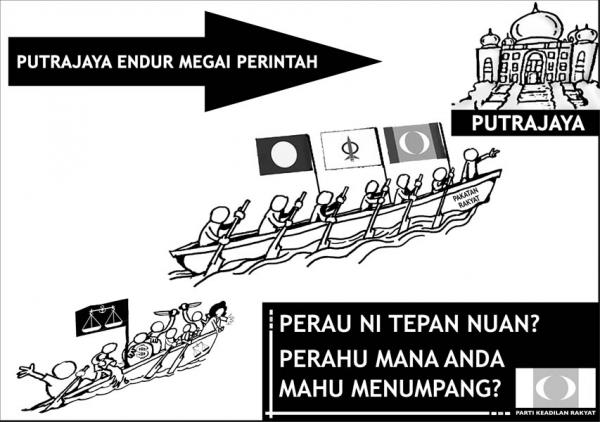