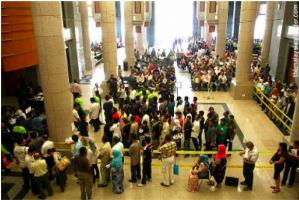 Many people feared at the time that the so-called 6P Malaysia programme was some kind of voter registration exercise, along the lines of the notorious Project IC in Sabah.

Touted as a sudden amnesty by the BN government for illegal foreign workers, the programme (which lasted from July 2011-April 2012) allowed the immigrants to declare themselves and pay a fee for an official permit to stay on for two years.

However, Sarawak Report has learnt through agents hired to process the permits that the main purpose of the exercise was to raise funds for BN’s election war chest.

Under the programme over 372,000 foreign workers were rounded up from fields, factories and construction sites and bussed into registration centres.  They or their employers were then required to pay up to RM4,000 each for the permits to avoid deportation and the money was specifically required in cash. 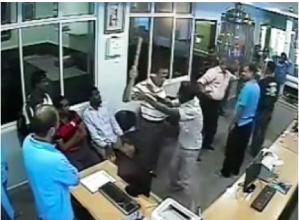 Given, it was a process which the government had farmed out to 340 private agencies to carry out at short notice, the whole affair soon became mired in confusion and controversy.

Coverage at the time focused on the cheating and chaos and the exploitation of workers, many of whom were being blackmailed for money twice or later deported anyway.

There has also been concern that the details of these immigrants may indeed have provided some of the information behind the many mysterious new names and addresses that have suddenly started swelling electoral rolls in BN target areas.

However, Sarawak Report has been informed that the priority purpose was to raise billions of ringgit in used notes for the cash-strapped UMNO to employ in the up-coming election.

“They [the agents] knew it was for the BN operation for the campaign, because they didn’t have enough funding at that time to declare the election. They got hold of as many foreigners as they could and they shared the cake”, explained our source, who is close to one of the many agents involved.

One and a half billion ringgit ‘piled up to the ceilings’!

A source explained to Sarawak Report that one agent was keeping piles of money in a back room ready to be collected by the political bosses.

“These notes were piling up to the ceiling in this room, it was crazy”, he reported, referring to just one of the scores of agents involved. 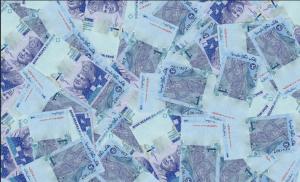 All in notes and piled high in back rooms!

Given such allegations, it is now a priority that the Immigration Department responsible for the implementation of 6P Malaysia provides full transparency over the figures on the costs of the programme and the money collected by the State.

Irene Fernandez of Tenaganita, an NGO which has defended the human rights of many workers affected, says there has been no adequate breakdown of the costs and expenditures so far.

“We know registration to the biometric system cost RM335, RM300 of which went to the agent”, she says “and we also know that RM180 went on a medical test, that’s all”.

Fernandez has also confirmed that all the workers she has represented were required to pay the agents in cash for their permits. She told Sarawak Report that she was not surprised by the allegation that the money was largely destined for BN:

“That is possible. We were certainly suspicious why there was a sudden amnesty and why this whole legalisation process?  We also wondered why agents were appointed to deliver the legalisation process when it could be run by the Immigration Department and Human Resources Minister combined, since they have the personnel and they could have done the whole thing. Why was it necessary to get in 340 agents?”

With 10,000 of the registered workers now facing deportation anyway, alongside numerous examples of cheating and unfair practices by the agencies hired by BN, a wealth of information has now been exposed about the close links between many of the agencies selected by the Immigration Department and BN/UMNO. 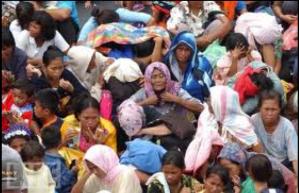 Perhaps the most glaring example of these crony relationships is that of SNT Universal Corporation, where employees were accused of caring out assaults against immigrant workers they were supposed to be providing with permits.

A Director of the company was none other than the former Home Minister, Mohd Radzi Sheikh Ahmad a position he had taken up just before the declaration of the amnesty in May 2011.

According to an investigation by Free Malaysia Today, SNT was also linked to several shell corporations that were allegedly posing as bogus employers for the sole purpose of rounding up illegal immigrants and registering them under 6P Malaysia.

So plenty of money once more for UMNO and its fat cats?  If so it comes again at the expense, of course, of the poorest and most vulnerable people in Malaysia.  Will such poor people soon be offered a small proportion of this money back in the form of election bribes?