Slapped Down By Taib! - I Didn't Mean That, Masing Grovels 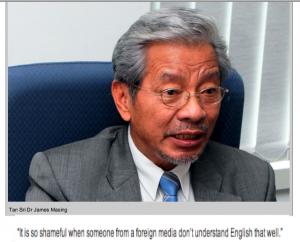 As predicted by Sarawak Report, James Masing has been immediately taken to task by his BN boss for daring to say publicly that the 12 dams planned under SCORE are not necessary.

Within hours of the appearance of the Land Development Minister’s explosive admissions during an interview with the international news agency AFP, Masing was forced to call round the press to make “clarifications”.

Of course he blamed it all on the journalist for ‘misinterpreting‘ his remarks:

“PRS president Masing grimaced that the interview was conducted in English and yet the journalist could not differentiate between the terms “identification” and “implementation”. “It is so shameful when someone from a foreign media don’t understand English that well.”[Borneo Post – Twisted Facts Outrageous]

In which case, how does Masing account for the meaning of his own series of quotes recorded by the English speaking journalist?

“It is not a firm plan to build 12 dams. I don’t think we will need that. We will only need four of them”

Referring to protests against the proposed dams Masing also said:

“I’m pleased that this type of thing takes place. But not all that we do is correct, and this shows we need to refine our plans and think again,”

And it was not just to AFP that Masing had uttered these climb downs. He said much the same to the Star newspaper on the same day, undermining all Taib’s arguments that the SCORE programme must be implemented to gain more cheap electricity:

“The plan is not written in stone and therefore it is not compulsory to build all 12 dams. It is just an identification of possible sites should we need to build dams 30 or 40 years down the road. They will be built when the needs arise. If the needs don’t arise, the dams would not be built,”  [Star – ‘Construction Plan Not Written In Stone‘]

In none of these quotes is there any reference to the words ‘identification’ or ‘implementation’.  So, will Masing now fall back on the lame claim that he was ‘quoted out of context’, having provided the same message to two different journalists in separate interviews? 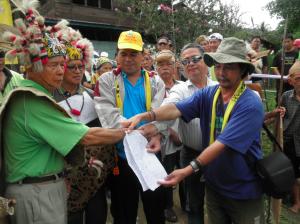 It is of course plain what happened to make Masing complain that he had been misquoted. Taib was furious and has demanded a retraction.

His senior minister has created headlines by admitting what all the world knows, which is there is no practical economic or social need for Sarawak to dam up all its great rivers to supply the tiny local population.

Neither have any of the international recognised standards for dam building, in terms of demonstrating need and conducting social and environmental assessments been fulfilled on any of these projects.

However, the message from Taib’s government and officials has been utterly uncompromising until now, which is that the 12 dams WILL be built and that indeed 50 more are being considered.

Masing was told to ring around and retract any doubts he may have sown about SCORE going ahead.

Building these dams over-rides everything !

Taib has no intention of altering his plans.  Consider the official line given by Sarawak Energy Board’s (SEB) spokesman Idris Buang on Australia’s recent Dateline show about SCORE.

Having confirmed that work on the Baram Dam WILL begin in 2014, whatever the conclusions of any economic, social and environmental impact assessments yet to be carried out, Buang stated:

“As it is, it has to go on. As I said the need to have all these dams that we planned for, overrides any other thing, you know, in the interest of the greater good of Sarawakians” [Idris Buang – Dateline Australia]

And again, Taib’s pet Chief Executive from Norway the US$4million a year Torstein Dale Sjotveit makes constant claims about the vital importance of damming up Sarawak to enable ‘development’.

In a series of recent emails Sjotveit has been lecturing Sarawakians that he knows what is best for them and that they should follow his ‘Norwegian model’ and not make protests about things they are clearly too backward to understand.

Trust me, I’m Norwegian – Torstein Sjotveit explains he is ‘grown up’ unlike the anti-dam protestors.

“I am proud of what I do in Sarawak, I believe what I do will benefit many generations of Sarawakiens. I am sorry to see that you are mislead by NGOs that has the campaign of lies (sic)….I am busy ensuring development and future opportunities for the people of Sarawak. Norway has developed almost all of its Hydro power potential and that is one very important element of our wealth, the others are fisheries and fish farming, aluminium industry and oil and gas. As you can see Norway has always been developing its resources and trust me, I am grown up and worked for 35 years with finding a balance between development, environment and social impact”.  [Torstein tells NGOs he knows best since he is a ‘grown up’ – are the protestors childish?]

These statements by Taib’s people are in total contrast to the flexibility implied by James Masing’s own statements yesterday.

Masing was quite right to say if the needs don’t arise the dams should not be built.  He was also right to accept that the local people were entitled to demonstrate and reject the projects.  And he is right to be terrified of losing votes because of the whole stupid scheme.

However, come what may, the state government of Taib Mahmud and Taib’s cousin in charge of SEB, Hamed Sepawi, have made up their minds that ALL the dams are needed and over-ride any other consideration.

After all, the companies CMSB (owned by Taib), Naim Cendara (owned by Sepawi) and Sarawak Cable (owned by Taib’s son) all stand to make a fortune out of the dam building projects and any industrial development funded by the cheap hydro-electricity.

Yet, even in his retractions Masing is still sending muddled messages and repeating his same arguments. 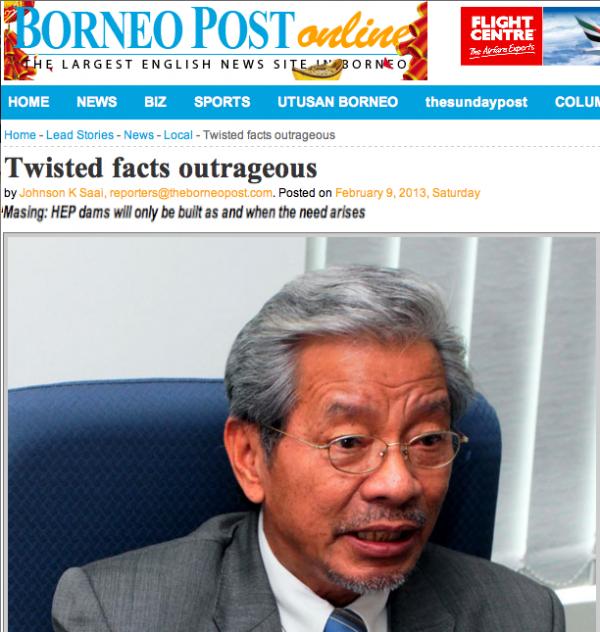 On the one hand he accused the reporters of misinterpreting him by questioning the commitment to SCORE and on the other hand he repeated his argument that all 12 dams may not prove necessary or go ahead.

In fact, during his so-called clarifications and retractions the Minister even went further than before and implied that the hugely controversial Baram Dam, which he had earlier told AFP would definitely be built, might not be built after all!

Speaking to the Borneo Post he said “if the need arises, we may build two more [dams] – in Baleh and Baram”.

“..they [the dams] will only be built as and when the need arises. If the need doesn’t arise, the dams will not be implemented. To date we have developed three dams, namely Batang Ai, Bakun and Murum,” he explained. “If the need arises, we may build two more – in Baleh and Baram. So, to assume that we will build HEP in all 12 possible sites is a misunderstanding on the terms identification and implementation.” [ Borneo Post]

What happened to SEB’s statement that construction on Baram will begin in 2014 and that the need for this and all the other dams “over-rides everything”?

In fact, having been sent off by Taib to deny that he was questioning SCORE, Masing has ended up by confirming the headline story and repeating his earlier remarks that the plans for Sarawak’s dams are by no means set in stone. 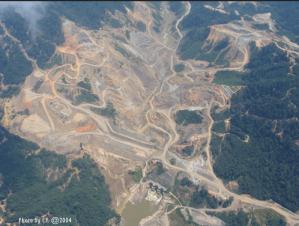 He has gone further by trying to imply that the political hot potato, which is the Baram Dam, might also be shelved!

What better proof that BN are divided and fighting against each other over SCORE?

Masing has been slapped down, but he is still attempting to distance his PRS party from Taib’s vicious plans that have proved so unpopular with voters and are threatening all six of his rural Dayak seats.

Voters would do well to ignore Masing’s confused, muddled and contradictory remarks. He is desperate to make them think that perhaps BN would not implement SCORE after all and that if it happens it is all a long way off.

But, if PRS and BN are returned to power it will be that old man in a hurry Taib Mahmud who will make the decisions, not James Masing – James does as he is told.