"No Environmental Issue" In Sarawak - BN's Open Invitation To Pollute! 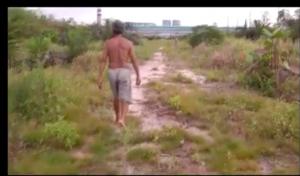 From rainforest to ‘progress and development’?

Recent statements from new investors in OM Holdings have exposed the Chief Minister’s shocking lack of concern over polluting industries in the state.

OM Holdings is the Bermuda based company, which Taib has invited to invest in a vast manganese smelting plant in Simalaju, in return for giving his own family company CMS a 20% stake in the venture.

This corrupt deal involves the construction of a potentially very poisonous and destructive factory, which threatens the health of the people and Sarawak’s rainforest environment.

In most countries such polluting industries require stringent planning permission and are very closely monitored, which can cause expensive problems for the owners.

However, this is what the Chief Executive of Boustead Singapore, Wong Fong Fui, said when he explained why he had decided to take the risk and invest in the OM factory:

“In Sarawak, there is no environmental issue because they need these kinds of projects to support the Bakun hydroelectric power project.  You get tax breaks and the power is cheap. That is a tremendous cost advantage”[The Edge 27/02/12]

No worries about being fined for pollution in Sarawak?

Blind eye from the authorities guaranteed?

The implications for local people and Sarawak’s once pristine rainforest are deeply concerning. 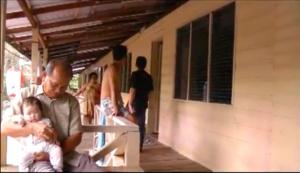 At risk? Thousands live near the Pressmetal and proposed OM Holdings plants in Mukah and Simalajau

Clearly, businessmen like Wong think that Taib’s state government is so desperate to attract industries to justify the building of Bakun and all the other planned dams that there will be no need to worry about standards on safety and pollution – the so-called “environment issues” referred to.

As Taib charges forward with his grand industrialisation vision, the message has gone out that Sarawak does not intend to get fussy over pollution.

After all, every cent that goes into OM and similar ventures further enriches Taib himself.  OM has already separately invested millions in a CMS subsidiary KKB Builders Sdn Bhd to build the plant.

Sadly, the welfare of the people come a definite second in this process

There have already been worrying reports about the health problems being suffered by local people living near the existing Pressmetal aluminium smelter plant not far away in Mukah. 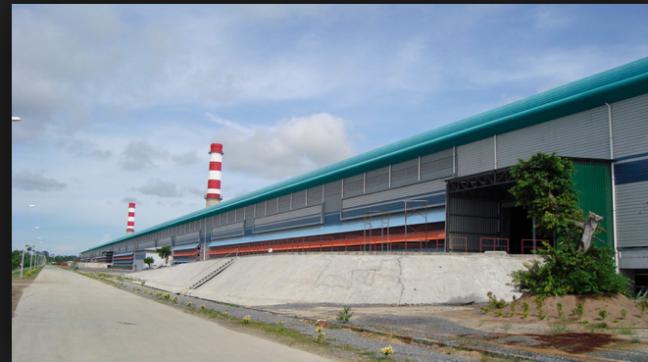 The area surrounding the factory is also showing signs of wilted vegetation and soil and river pollution according to visitors.  The chemicals involved in producing aluminium can be highly toxic. 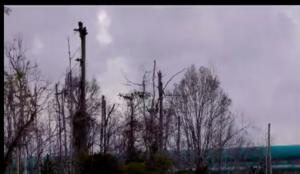 It is doubly shocking that the local people who have been affected in this way have been excluded from employment at the plant and so far have seen little benefit.

Instead, Taib has made a number of statements admitting he plans to import tens of thousands of workers from countries like India to work on the plants instead.

Recently he visited two Muslim universities in India to recruit such workers, in preference it seems to locals living in the State of Sarawak, whom he has belatedly admitted he failed to properly educate to take advantage of ‘development’ jobs over his past 30 years in government.

With the on-going the revelations about BN’s deliberate policies to bring immigrants into Sabah to weaken the votes of indigenous tribes, it is inevitable that people must wonder at Taib’s strange choice of visiting such institutions in India.

Malaysian money is being poured in to the project

Meanwhile, the money-making potential for Taib’s own family and cronies for these projects have gone from strength to strength.  KKB Engineering is also primed to get the contract for building the sea port needed to export the manganese from the OM plant. The opportunities are boundless since Taib controls the issuing of all licences.

And it is clear the Chief Minister is happy to use his political influence in Malaysia to shore up investment in these dubious projects.  In his interview Wong Fong Fui had admitted that the market is not promising for investing in manganese, since prices have been falling, however he was confident in risking involvement in the half billion dollar investment by a relatively low capital company.

That confidence has been recently shored up by a huge investment by Malaysian banks who have risked a $300 million further investment.  The money has been raised in a consortium backed by RHB Bank Bhd (which the Employee Provident Fund largely bought over from Taib a few years ago); Malayan Banking Bhd; Standard Chartered Malaysia Bank Bhd. 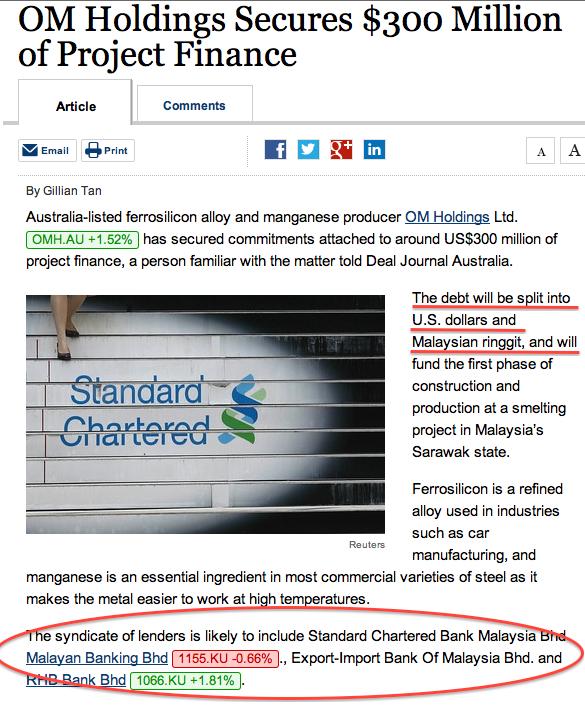 Helpful investment in this risky half billion dollar project from Malaysia’s institutions. Much of the money will disappear into contracts for Taib’s companies.

Given Taib’s personal interests in the project and the now enormous stake by some of Malaysia’s top banks, it was clearly a good judgement that investors do not have to worry about “environmental issues” becoming a problem for their dirty businesses in Sarawak.