Quite Right To Fight! 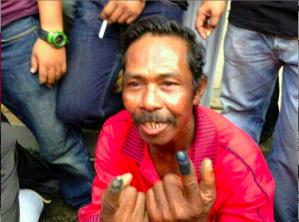 BN should not expect Pakatan Rakyat to take their version of GE13 lying down.

After all Pakatan represent the majority of the voters by a very substantial and convincing margin!

Even after all the jiggery pokery with the electoral register, the bus loads of phantom voters, the mysterious additional ballot boxes that arrived during re-counts, the double voting that excluded numerous rightful voters from being able to cast their ballots, Pakatan gained almost 8% more of the votes in Peninsular Malaysia.

Even when the despot votes from Taib and Musa Aman were chucked in from East Malaysia Najib roundly lost with only 46.8% compared to 50.8% of the electorate. 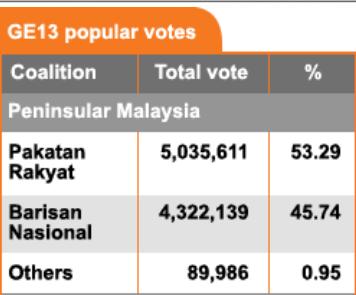 Malaysiakini’s figures from the Election Commission

So, it is quite preposterous for any police chief to suggest that they might arrest Pakatan leaders for ‘sedition’ for pointing this out.

Any such an arrest would in fact constitute the seditious act, as it would plainly undermine the wish of the popular majority of the state. 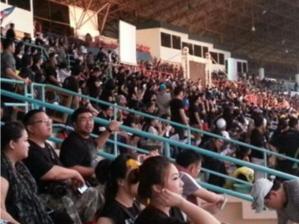 People have been threatened with ‘monitoring’ for wearing black!

Likewise, it is surely seditious for police to attempt to harass people for wearing black in protest over jerrymandering by an Electoral Commission, which was stripped of its independence by BN and now sits in the PM’s own offices with a primary duty to make sure BN wins for ever and ever and ever?

What a load of outrageous nonsense to start talking of arrests!

Protest is a democratic right

If BN want to make an expensive public show of running a civilised democracy with elections (and GE13 cost billions, if mainly in bribes) then they must needs put up with the other key trappings of democracy.

These include public demonstrations, protests, banners, free speech on public platforms and the right to wear black, yellow or what ever other form of apparel expresses the inner views of the individual.

People don’t usually give up their Saturday afternoons, unless there is something extremely important that they are concerned about, and governments are duty bound to listen if they do.

In return, the people are required to act in a restrained and non-disruptive manner that does not upset any of the rights of other fellow citizens. The orderly rally in a stadium on May 8th was a perfect example of just such a gathering.

Keep it up – BN could never get a crowd like this to support them!

There should be many more such public expressions of dissatisfaction to remind BN that they lost their legitimacy in this election and that reform of their gerrymandering devices is required immediately.  Contested seats should also be properly adjudicated. 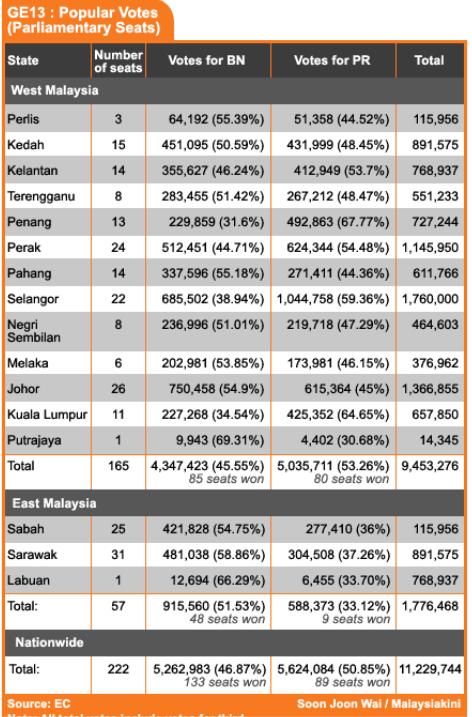 People who are saying that more rallies and protests are a waste of time tend to be jaded observers of Malaysia’s recent past and the corruption of the country by Mahathir Mohamed.  They feel there is no point, since everything is a sham.

However, in practice they are asking people to give up on demanding their rights. And if the people do not stand up for themselves now, BN will move swiftly to oblige and with a huge sigh of relief.

If marchers stop turning out, their energy sapped by bleak cynicism, the losers in this election will go as far as they dare to try and ban any expression of the popular will by calling rallies ‘seditious’ or ‘unruly’ or whatever they like.  Some are already doing it.

Instead, BN should just get used to persistent if polite marches and rallies until they put their house in order and conduct clean and fair elections.

BN have lost their confidence, don’t let them regain it undeservedly

This decades old coalition has rightfully lost its confidence as a result of this election drubbing and the people should not permit BN to regain it or to tell themselves that they won the election after all.

BN did not win the election, they lost it fair and square and in the full glare of international publicity.

Some have fallen lamely back on talk of the US in 2000 being won by a minority vote, but that is nonsense too.  In 2000 it was sufficiently contentious that Bush was able to claim victory with .5% less of the popular vote.

In Malaysia in 2013 Najib gained 4% less of the popular vote than Anwar (after cheating) and 7.5% in Peninsular Malaysia.

So, giving up is not an option.

It is easy for people to become stuck in the past and to imagine that what happened before must always be.  In Europe the Berlin Wall was treated by many like a fact of life, as if it had always been there instead of just a few decades, like BN.

But in truth all empires collapse, everyone dies and nothing stays the same.  Therefore it is right that Malaysia’s young people should be active in determining a better future, rather than resigning themselves to more corruption and despotism.

Progress does happen when enough people put some effort into it.

And no one should under-estimate the sea-change that did take place in GE13, when a massive turnout swept away all BN’s efforts to manufacture the sort of wins they got away with in the past.

BN lost their legitimacy on May 5th

BN employed the full apparatus of the state into trying to ensure their win.  The media talked up their ‘victory’ unceasingly and refused to publicise Pakatan wins until they were ‘over-turned’ by numerous dubious re-counts.

The police were dragooned into escorting buses loaded with foreigners to election booths and state employees were bullied and pressured into voting for BN.

Yet, even so, to justify the figures the ballot box stuffers of the Election Commission were forced to announce an extraordinary and record breaking 80% turn out on the night, which next day they had to revise up to 85% to explain the numbers of votes that had apparently been forced into the various re-counts.

How could the turnout suddenly bounce up AFTER the election had been announced and yet other figures stay the same?

Think about it.  An 85% turnout in Malaysia?  This means that the extensively rural country with large numbers of very poor voters and around a million of its better off citizens unavailable abroad produced one of the highest turnouts in global election history!

42 seats more for BN, despite the less votes

Not even that explains the jiggery pokery behind the election commission’s figures, because even now their own figures still don’t tally.

The over all election vote, according to their separate figures was 27,403 more than the tally.

Does this mean 27,403 ‘spoilt votes’ on top of all the other outrageous jiggery poker?

Figures revised after the event!

27,403 spoilt votes is a very large number.  Especially when you look at the narrow margin of so many of BN’s wins, a good number of which over-turned original Pakatan wins after a recount.

According to our calculations, 5,827 votes represent the total majority of BN’s 10 most narrow wins!

20,067 represents the total BN majority in the most marginal 20 seats.  Another 3 seats come to 6,303 total majority, meaning that the number of spoilt votes alone exceeds the margin by which BN ‘won’ the election.

Individually, there has already been considerable evidence that in numerous seats the ‘spoiled votes’ outnumbered the BN majority by a considerable amount.

Analysis of BN’s election ‘win’ has only just begun, but the more that comes out the greater the smell

All this is virtually impossible for the shamed and embarrassed BN hierarchy to defend.  Who would want to be in their shoes day after day during the next Parliament when the majority leader (Anwar Ibrahim) challenges them on all these points and requires them to give way?

The problem BN faces is that time HAS ALREADY moved on and the crude practices that the likes of Mahathir could get away with as he sucked his country dry are no longer effective in a world of fast communications, video recorders and the internet all employed by an educated young population.

BN are already a museum piece, like North Korea. 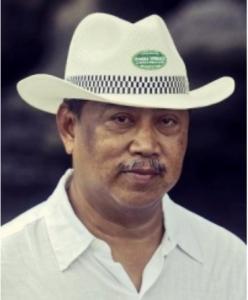 Open secret – ‘hard man’ Muhyiddin has been waiting in the wings, to let the more popular Najib lead BN in the elections and then take over after blaming him for BN’s losses

The worst thing would be to allow the dreadful old has-beens of BN from the Mahathir era to think they can turn back the tide of that history and that all that is needed is a ‘crack-down’ under some kind of ‘hard chap’, like Muyhiddin Yassin.

There are people who think that by reversing what reforms have taken place in past years they can restore past ‘glories’.

Such small brains forget that the reforms were conceded under pressure in the first place and they imagine that Malaysia can return to be a backward museum of sham democracy where people like them can continue to enjoy ruling the roost.

But they need to realise that what small state dictators got away with in the Cold War era, when the eyes of the electronic age had yet to be switched on, is no longer possible.

In their hearts they admitted it when they accepted that they needed to keep the more moderate and tolerable Najib as their leader during the election, since only a small angry minority of voters prefer the aggressive Mr Muhyiddin.

The UMNO extremist hope now is to replace their front man, Najib, with their hard man Muhyiddin and then defy anyone to say they didn’t win the election fair and square! 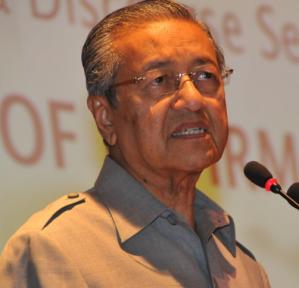 ‘Has been’ without dignity – past politicians should go and do something else useful and not try to keep meddling.

This is too crude, too public and too playground ridiculous to wash on the world stage.

This weekend the British PM meets the Russian PM to decide on how to collaborate on sorting out Syria.

This is no longer the Cold War era and no government wants to be seen openly supporting a thug and BN cannot reverse this election with a crackdown and expect it to pass unnoticed as before.

BN have got to find a more dignified way out of this mess they are in and concessions, reform and gracious acceptance of the present popular opinion is the only route forward.

It may mean they will soon be out of power for some years.  But, it gives them the chance to come back.  If they ‘crack down’, go backwards, fight and oppress the majority then they will write themselves out of Malaysia’s future and blacken their names forever in Malaysia’s history.