The World Wakes Up To Taib - AFP Says It As It Is.. 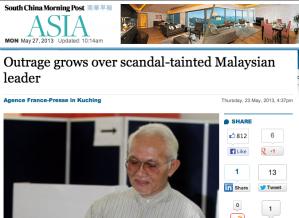 In case readers of Sarawak Report failed to pick up on the assessment of Sarawak by one of the world’s top news agencies, Agence France Press, we reprint (below) how it was presented in the South China Morning Post.

Taib had better accept that the international perception of his regime has finally wised up and that even the top news agencies and international news papers feel little restraint about using the ‘C’ word when they describe his management of Sarawak.

C is for Corrupt

For news organisations to describe a politician as being considered corrupt, particularly such a rich one as Taib, is unusual.  They have to be sure of the situation and the fact that the politician’s reputation goes before him.

This is now Taib’s status.

The old ‘White Haired Rajah’ is so mired in his own greed and corruption that he drags the reputation of Sarawak and Malaysia down with him.  This is the South China Post’s article about Taib Mahmud:

Despite earning a civil servant’s salary for three decades, Taib Mahmud, the powerful chief minister of Malaysia’s Sarawak state, is reputed by critics to be one of Asia’s richest men.

Taib, 77, and his family are accused of massive corruption and running Malaysia’s largest state like a family business, controlling its biggest companies with stakes in hundreds of corporations in Malaysia and abroad.

A Rolls Royce and flashy jet cover his transportation, while a vast war chest has kept his political authority unrivalled in 32 years in charge of the resource-rich Borneo island state, which remains one of Malaysia’s poorest.

“The amount of control he has is astounding. He has been able to dominate politics and society here for nearly four decades,” said Faisal Hazis, a political scientist with Universiti Malaysia Sarawak.

But pressure is rising both at home and abroad for action against a man referred to by his harshest critics as the “thief minister” and viewed as the prime example of a culture of corruption fuelling public disgust.

Such revelations are hugely embarrassing for Prime Minister Najib Razak, who faces a slide in support due in part to corruption blamed for bleeding the country of billions of dollars annually.

But Taib, a member of Malaysia’s 56-year-old ruling coalition, is widely considered untouchable because the Sarawak parliamentary bloc he controls helps keep the coalition in power.

“We don’t see the political will to address grand corruption like this and it could destroy the country” by crippling economic development, said Josie Fernandez, Transparency International’s Malaysia director.

He and his family are accused of routinely taking kickbacks for lucrative government contracts or awarding the projects to companies they control.

A prime example dominates the languid capital Kuching – the state-assembly building whose swooping, golden roof gleams like a crown in the tropical sun.

A Taib-linked company won the US$98 million contract to build the structure, which opened in 2009 and is home to a legislature he controls. A similar story surrounds a futuristic convention centre nearby.

A member of the Melanau tribe, supporters see him as defender of the autonomy of Sarawak – which is marked by Christian and tribal groups – against the Muslim Malay-dominated federal coalition based on mainland Malaysia.

Taib denies wrongdoing, saying Sarawak must be developed for its 2.4 million people. His critics spout “a web of lies and half-truths wrapped around ignorance and twisted logic”, he fumed last year.

But pressure grows, including in the rugged interior where Taib is blamed for decimating vast rainforests through logging and dam projects and evicting tribes from ancestral lands, sparking protests.

Philip Jau travelled for two days by road with dozens of his Kayan tribesmen to protest this week in Kuching against a mega-dam pushed by Taib on the remote Baram river despite local opposition.

“The dam is a curse from hell,” said Jau, wearing a feather-strewn traditional woven cap. “Taib will benefit, but he is killing the people.”

Jau fears the dam will destroy a river ecosystem the Kayan rely on, noting that tribes near the already-completed Bakun dam, Malaysia’s largest, say that has happened there.

BMF head Lukas Strauman said Taib and his family are the “chief culprits in destroying one of the world’s last great rainforest areas.”

In December, Swiss parliamentarians called for a freeze on any Taib assets there, saying he had abused office “in a spectacular way”. Swiss authorities are yet to respond.

Malaysia’s anti-graft agency launched an investigation in 2011, but it is widely accused of foot-dragging.

Faisal said action is highly unlikely as Sarawak seats proved crucial to the federal coalition winning May 5 elections, showing Taib is “more important than ever” to the government. Premier Najib’s office declined to comment.

Taib has gotten even richer since the polls.

Shares of Taib-linked CMS — Sarawak’s largest conglomerate – have soared 65 per cent following the ruling-coalition win, and the compliant state assembly tripled Taib’s pay to nearly US$400,000 on Tuesday – his birthday.