UK Press - Anwar Could Be Next PM! 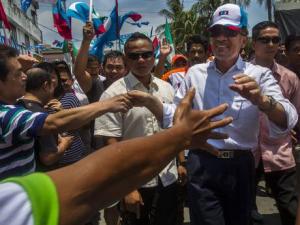 “Anwar poised for a comeback on the promise of leading ‘Malaysian Spring’”[UK Times].

“The second coming of Anwar Ibrahim. He rose to the top and then ended up in jail.  Now Malaysia’s opposition leader stands on the verge of a remarkable election victory”[UK Independent]

Articles from all sides of the UK press spectrum, the conservative Telegraph and more liberal leaning Independent and the Times, have given a resounding acknowledgement to the prospect that Anwar Ibrahim, Malaysia’s former Deputy PM, may by tomorrow have completed a long and difficult road to become the country’s new leader.

After all, yesterday for the first time even the mainstream polls saw Anwar creeping ahead of Najib as the most popular candidate for Prime Minister, with the final momentum turning apparently towards the opposition.

“Anwar Ibrahim, the Malaysian opposition leader who spent years in prison …has taken the lead in polls before tomorrow’s elections, raising the prospect of a change in government for the first time since independence from Britain”[The Times] 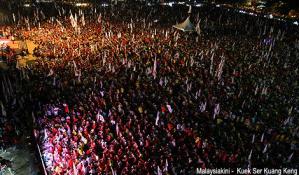 100,000 rally in Penang, furious at the massive attempts at vote-buying in past weeks by BN fat cat Jho Low.

Perhaps Malaysians are just fed up with being ruled by the longest running coalition government in the world?

If all other democracies have shown themselves able to stomach a change, maybe Malaysia has decided to opt for some fresh air as well?

But the Financial Times points out that the main driving factor in the growing momentum against BN is that young voters are fed up with corruption “He [young voter] plans to vote for the opposition coalition because he is disgusted by what he says is pervasive corruption and an out-of-touch leadership”, explains the FT.

The article also points out how Najib has spent the last few weeks blatantly buying votes:

“There are also worries over the fiscal health of the country. Malaysia’s public finances are among the worst in the region. Its debt-to-GDP ratio is forecast to rise to 53 per cent this year, the highest in Asia after India and Pakistan. Yet to help shore up support, Mr Najib has distributed cash to the poor, civil servants and even the 40,000 employees of Petronas… Barisan argues that this helps to stimulate the local economy by putting cash in the pockets of the less well-off, such as Amirul Nizam, a 29-year-old government employee who received M$500 ($165) in March. “I spent it on my daughter, clothes and food,” he says. While many see this as a crude form of vote-buying – Mr Nizam says he will vote for Barisan – economists worry it will only add to fiscal strain.”[Financial Times]

The common mantra of most foreign coverage about Malaysia has been that its economy has been successful.

However, few have gone deep enough to mention that BN has been relying for its resources mainly on Malaysia’s and particularly East Malaysia’s finite natural resources, rather than developing a more modern manufacturing economy.

Worryingly, BN’s ‘economic success’ has rested on a crony class who have been stripping through the country’s oil, timber and other natural resources at an alarming and unsustainable rate.

Are voters reflecting on what benefits this short-term exploitation has brought except to a handful of people?

“The IMF this week lumped Malaysia with Thailand and Indonesia as laggards in raising their living standards as South Korea and Taiwan have.

“Malaysia has always been a very rich country. Its economy used to be one of the most envied at the end of the Mahathir period, but we see that it is not doing as well as other countries that are seen as our real competitors. It’s stuck,” says Ooi Kee Beng of the Institute of Southeast Asian Studies (Iseas) in Singapore. Malaysia’s household debt is the highest in Asia, having risen to 80.5 per cent of GDP last year from 75.8 per cent in 2011. Iseas points to another concern. It says that Malaysia’s exports are increasingly dependent on commodities such as oil, palm oil and rubber, rather than electronics. Where previously they were a mainstay of the export market”[Financial Times] 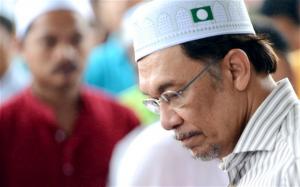 Telegraph – Anwar is a Malaysian Muslim, who has championed equality of treatment for all races and religions in line with modern countries across the world

Economics and voting intentions aside, the UK press seems to have united in a genuine recognition for Anwar Ibrahim, as a Malaysian leader who has the mettle of a world class figure and a man who has lasted the course.

The Independent tells his ‘remarkable’ story that has led from youthful reformist, to number two in government, to six years in jail and now to the brink of a possible election win that could bring Malaysia at last into the status of a genuine mature democracy with a peaceful change of government through an election.

“It’s such an authoritarian system. We need to transform the country into a vibrant democracy,” said Mr Ibrahim. “There is no independent media, we have racist policies. We need to have a more transparent system that recognises the value of all relationships, irrespective of race.”[Anwar, interviewed by the Independent]

The Telegraph likewise records Anwar Ibrahim’s extraordinary career, dotted with highs and lows and it is evident that the scare stories which have been circulated that a change of government would somehow cause a collapse of confidence in Malaysia abroad are not gaining much credence.

“My coalition stands for responsible governance. If we win, my first task will be to give freedom to the press, to tackle the country’s discriminatory and draconian laws and to stop the corruption that has blighted the country by addressing monopolies such as of Petronas (oil) contracts and the corrupt ministries,” he said.

“I think a win for the opposition would boost Malaysia’s standing abroad, showing that we can operate a responsible, modern democracy – I think it will help economically and boost investments. Inside the country, ending endemic corruption can help stop the crippling poverty in rural areas.

“Five more years of the same government would lead to yet more corruption and yet more discrimination.”{Anwar Ibrahim speaking in the Telegraph]

The similarities of Anwar’s story with that of Nelson Mandela of South Africa are also pointed to.  There is a recognition that Anwar Ibrahim could indeed become a world leadership figure, every bit as sympathetic to Western governments as the present one. 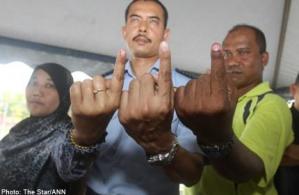 Dark concerns about cheating on numerous fronts as so-called ‘indelible ink’ washes off!  BN should do well to learn that ‘losing gracefully’ is an honourable thing to do for your country and shows political maturity.

However, if BN hang on in this razor tight election the world will never know.

Because, Ibrahim makes clear in his interviews with these foreign newspapers that this is the occasion that he is putting his energies into and if he loses then he will pass on to a new generation.

However, if the outcome is left in doubt with BN claiming a dubious win amid accusations of dirty tactics, the opposition leader’s position will be much more difficult.

The foreign press has also become fully aware of the apparent sculduggery besetting this election and have started widely reporting it.

BN should realise that the modern media now shines the light on such practices, which may have been possible to carry out secretly a decade ago. The BBC has also reported on fears about the integrity of the election.

Both sides would do well to play fair in this election in all respects.  BN should hold back their phantom voters and dirty practices and remember that in a mature democracy the losing party can always come back to win once more in five years time!