No Resolution Without Justice 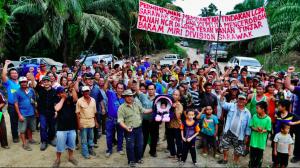 Long Teran – How can there be settlement without justice?

This past month saw Taib Mahmud’s 50th anniversary of uninterrupted public office.  Thirty three of those years have been spent as Chief Minister of the State of Sarawak.

He has chosen this symbolic moment to make various remarks acknowledging the ‘lack of progress’ achieved by the Dayak people during that time.

Yet, cheekily, he suggests that it is he who can come up with the solutions to the problem, when it is plain to all around that it is he, Abdul Taib Mahmud, who has been the biggest single cause of Dayak woes throughout all those 50 years.

“Chairing a special cabinet meeting on July 22, Taib announced the State Cabinet had decided to constitute a special programme to develop the Dayak community. He acknowledged that since Independence, Dayaks in the state had been left behind.  “We want to help the Dayaks as over the years they have shown they are willing to work together with their leaders in the government, and also try to reorganise their assets,” [Taib said]. 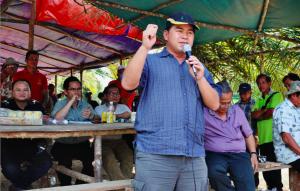 The gambit proposed by Taib and his main political side-kicks is that, if the native people could stop fussing about their land rights and agree to sell off their ancient territories, for say the cost of a Toyata car, then ‘progress for the Dayak’ could at last be achieved.

Certain ‘native leaders’ in BN have been making speeches to this effect, alleging that the existence of Native Customary Lands Rights, as upheld by recent court judgements, should be seen as some kind of disadvantage.

These leaders pretend to be worried that Dayaks are not free to just sell off these territories (and the heritage of their children) to greedy tycoons, eager to exploit and bully impoverished villagers.

In fact, NCR lands are a protection against this kind exploitation for these communities.  And even though the native people of Sarawak have been denied their rightful education by Taib, most have now worked out the danger of such strategies for ‘development’ as the handing over of their native lands to big companies in ‘joint ventures’ or straight sales.

So, Taib and his land grabbers have had to come up with different strategems, one of the most successful being to first designate a native territory as ‘Protected Forest’, thereby overriding community rights, and then later to re-designate such areas as commercial territory!

The recent brave protests by the battered community of Long Teran Kanan against the Federal Court decision to refuse to consider the over-ruling of a High Court judgement in their favour has provided a complete case study of this pernicious practice.

These native territories in Dulit (in the Tinjar/Baram are) were long ago loaned by the Berawan tribe to local communities of Kayan and Kenya.  Then, owing to the natural beauty and importance of these virgin forest lands, they were designated as Protected Forest back in the 1960s. 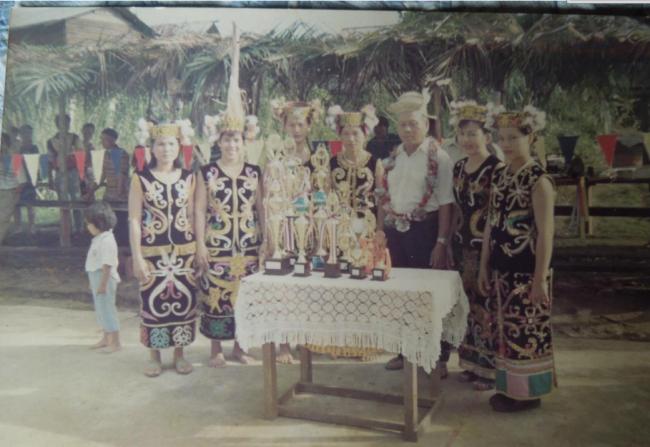 At the time it was agreed that the tribes could continue to live their traditional lives in the area, in harmony with the forest. The state recognised the status of these settlements, not least by providing primary schools.

Then in the 1990s Taib Mahmud decided to grab the region for his own interests. The virgin ‘Protected Forest’ was suddenly re-designated for oil palm by the misleadingly named Land Custody and Development Authority (LCDA), which Taib himself invented and personally runs.

To carry out the job, Taib’s LCDA set up yet another of its so-called ‘joint ventures’ called Rinwood/Pelita, owned by a team of the Chief Minister’s closest crony businessmen, including the notorious Hii family.

The natives were, of course, not properly notified or informed about what had been decided, but it was not long they were subjected to typical trauma and harassment, as Taib’s loggers and planters moved in, the gangsters never far away.

Without any notification, villagers relate, the bulldozers just arrived and tore up the forest, along with their carefully cultivated lands and rubber plantations:

“There were actually no dialogues. They never approached us about their intention to open up our land for plantation. They came in and straight away started opening up our lands with their machines… The community went to see them and inform them, and said they were not happy by the way the company had come in and they said they did not want the company to affect their lands. But the company did not respond: they ignored our request. They went ahead and opened up our lands, our farms and private lands, where we had many fruit trees [Headman]”

In a sorry pattern, completely familiar to the Dayak of Sarawak, the local people turned to the police, who told them they could do nothing because Taib’s Pelita/LCDA was in charge.

Not only were their possessions and rights ignored, they were offered no compensation:

“All my plants were bulldozed by Rinwood in the 1990s. I had about 3,000 cocoa trees which were cut. There was no real consultation. Sometimes they just bulldozed on Sundays when there was no one around as people were in church. Some people did get compensation but others did not. Like me, I got no compensation [farmer]”

It is against such a background that Taib has chosen to observe that the Dayak people have suffered “lack of progress”.  Is there any wonder?

What the Chief Minister and his supporters seem to have conveniently forgotten, in the process of making huge sums out of destroying Dulit and so many other areas belonging to natives, is that at the time all this damage was done in the name of ‘development’ for the local people.

Development? What Taib has had to offer so far

While Taib and the Hiis and all the other Sarawak tycoons have got richer and richer, the local people, in whose name all this was done, have received nothing.

Not only were their lands and livelihoods destroyed, but most of them received ridiculously little or no compensation at all.

Worse, nothing was invested back into their areas from the billions raised in profits.  The Dayak have not only lost their forests and seen their rivers destroyed, but they have been offered no place in the ‘new economy’, as they had been promised.

Their sad longhouses, which were once sheltered by jungle, are now surrounded by palm plantations. Yet these communities continue without proper roads, electricity, water or further education for their children.

What progress have they received?  As Taib Mahmud now smugly admits, none.

After 50 years the great plastic 1 Malaysia blue water butt to catch rainwater remains Taib’s most significant token gesture towards “development” for the people of Dulit and so many places elsewhere.

People, who once had a whole forest for their larder and rivers for their water, now silted and polluted.

So, when Taib weeps crocodile tears about the lack of progress for the Dayak he should be told that he himself is most to blame.  All he ever wanted was their land and it is still what he wants – all that is left.

Next, in a typical move, the Rinwood group of Taib cronies sold on the Dulit plantations to Malaysia’s giant IOI corporation, for a fat profit.

At the time, IOI was assured by Taib insiders that there was ‘no problem’ over the court action already initiated by the angry communities of the area, since they had no rights.

IOI holds great store by its membership of the Round Table of Sustainable Palm Oil, having chewed up much of Borneo’s rainforest before attending to its image problems.  So, how does this company square such treatment of the people of Dulit with all its proclamations about corporate responsibility?

NGOs confirm that few of the local people have been able to find any sort of job on the IOI plantation, which prefers to hire cheap Indonesian labour to the local people, who cannot live on a salary that is reported to be less than half the minimum wage in Malaysia.

And there are complaints that IOI managers have attempted to use the lure of work to force the locals to give up their remaining lands:

“[They said] we can promote you if you surrender your lands. But I replied, ‘I do not want your promotion. This land is very important to me’. Then they threatened us with police and gangsters. We replied that it seems you have not come in good faith but have come as a robber with no intention to work with us for our benefit. We refused to give up an inch of our land. I was dismissed [from employment] the very same day”[Kenya speaking to Forest Peoples Programme, report]

So, when PKR’s native land rights lawyers finally got this disgraceful situation to trial, after the court system dragged its heels for some 16 years (allowing plenty of time for Taib and his cronies to destroy the area and plant their palms) it was at least some justice that the High Court of Sarawak found against IOI/LCDA and in favour of the native people of Long Teran.

This meant the local people had been vindicated and were eligible for compensation and IOI were at first willing to negotiate a settlement, say insiders.

However, it was at this point that, once again, the LCDA Chairman and Chief Minister (and Planning & Resources Minister and Finance Minister) Abdul Taib Mahmud demonstrated how it is he and his own mean greed, which has   above all held back the Dayak for the past 50 years.

His LCDA refused to accept defeat and determined to appeal the judgement, dragging their JV partners IOI into the battle with him.

As a result, the poor people of the forest were forced to face an Appeal Court judgement, which (surprise, surprise) overturned their native rights on the basis that these had been extinguished when the area was made Protected Forest!

Protected Forest? This is an area now covered in oil palm.

In such circumstances why is Taib Mahmud not facing the full force of the law for destroying the Protected Forest?  Of course, it is because BN has corrupted the legal system along with everything else in the 50 years since Taib joined Sarawak’s first cabinet. 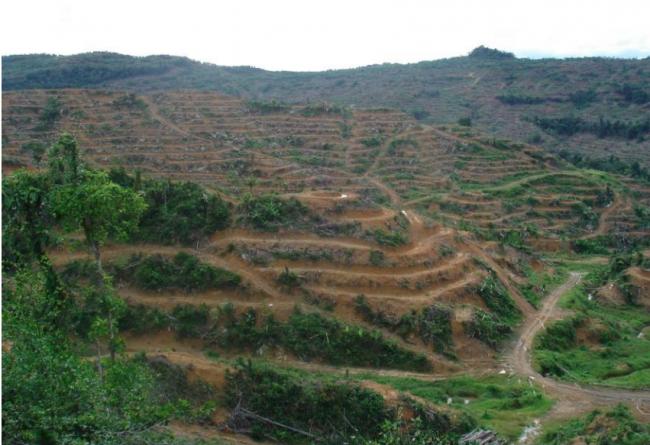 Protected forest? How Taib treated the area in Dulit that was brought under ‘state protection’, supposedly extinguishing native rights in the process

Equally unsurprisingly, the Federal Court has now announced it is refusing to examine the case further.

But the people know when justice has not been done or seen to be done, which is why they will not accept this ruling and why they will continue to protest and reject the IOI/Pelita Plantation in Dulit.

Under Taib Mahmud, gangsters have been used to intimidate the Dayak; biased police have failed to protect the Dayak and the courts have turned a blind eye to these injustices.  But, until justice comes the Dayak will not cease to protest.

And Taib will remain their biggest problem and obstacle to development.