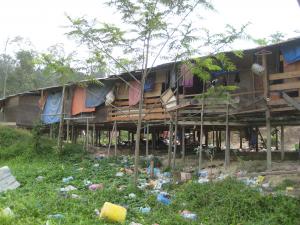 As news comes in of a weekend when Sarawak Energy started flooding the Murum Dam in the absence of any agreement with the native people, many of whom are still blockading the site, we publish the Bruno Manser Fund announcement (below) that they are nominating the company for the Davos “Public Eye Award”  for the world’s worst company of the year.

The developments coincide with dreadful news that the longhouse belonging to the rebelling Penan tribe was also burnt down in the course of this troubled past day, leaving the fate of the inhabitants uncertain.

Radio Free Sarawak has been covering the story and Sarawak Report will be trying to keep up with these highly disturbing developments against Sarawak’s most vulnerable communities.

(BASEL, SWITZERLAND / KUCHING, MALAYSIA) we have just received the sad news from Sarawak, Malaysia, that the state’s electricity monopolist, Sarawak Energy, has started the impoundment of the 944 MW Murum dam in Sarawak without prior notice given to the six Penan villages of Long Wat, Long Luar, Long Tangau, Long Menapa, Long Singu and Long Malim. According to community sources contacted by Sarawak’s SAVE Rivers network, the outlet river diversion tunnel has been closed on Saturday night. More than 100 Penan are currently protesting at the dam site.

We have also been informed that the Penan village of Long Watt has burnt down in a case of suspected arson by Sarawak Energy workers. The communities are also reporting the loss of a number of boats due to the flooding of the dam impoundment. An estimated 1500 Penan and 80 Kenyah natives will lose their homes due to the Murum dam impoundment which will flood 24’500 hectares of their lands and forests.

The Bruno Manser Fund calls on the UN Special Rapporteur for the Rights of Indigenous Peoples, James Anaya, to urgently intervene with the Malaysian government and to ask for an immediate stop of the Murum dam impoundment. The international community is urged to pressure the Malaysian Prime Minister Najib Razak to put an end to the humanitarian crisis in Sarawak and to properly address all outstanding resettlement issues with the affected indigenous communities.

The Murum dam construction is the first of a series of twelve dams planned by the Sarawak state government in an unprecedented mega dam construction program affecting tens of thousands of indigenous people in the Borneo rainforest. Alone the planned Baram dam, whose construction is about to start after the completion of the Murum dam, is estimated to cause the forced displacement of 20’000 people. Hundreds of square miles of tropical rainforests and biodiverse native farmlands are threatened to be flooded

The Murum dam construction history is connected to a series of scandals that are hard to imagine anywhere in the world outside Sarawak. The dam construction was started under a cloud of secrecy even before the realization of an Environmental Impact Assessment (EIA) and a social impact study. Most public contracts within the dam project were given to companies linked to the family of Sarawak Chief Minister Abdul Taib Mahmud, such as construction conglomerates Naim Cendera, Cahya Mata Sarawak and power transmittor Sarawak Cable.

The construction of Murum dam would not have been possible without support from Western engineers and managers. Hydro Tasmania, a state-owned Australian power supplier, seconded engineer Andrew Pattle to direct the Murum dam construction. Torstein Dale Sjotveit, a Norwegian national, oversees the dam construction in his role as CEO of Sarawak Energy. Sjotveit has repeatedly been accused of supporting the Taib family’s corrupt practicves and has been reported to Malaysia’s Anti Corruption Commission MACC by local activists. The Bruno Manser Fund will hold Western companies, engineers and managers responsible for their role in the Sarawak government’s human rights violations related to the dam projects

For more information on the Sarawak dam constructions and related corruption, check our campaign site for the following Bruno Manser Fund reports:

For information from the ground, contact Peter Kallang, chairman of Sarawak’s Save Rivers network, under +60 13 833 11 04