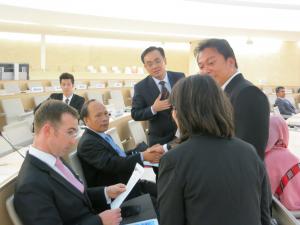 Wright and the SEB team.  He was invited to engage with NGO dialogue at Geneva – an invitation that was spurned

It turned out that his mission was to present a highly sanitised report to the United Nations, praising his company’s treatment of the natives affected by the state’s mega-dam plans.

The document summarised the resettlement arrangements, which Sarawak Energy (SEB) claim to have agreed with the Penan and Kenyah of Murum, with the following statement:

It was a claim that provoked considerable ridicule amongst those present in the UN, given that back home the mega-dam programme is being confronted by a rash of protests and blockades and a current resettlement crisis.

It has emerged that several families already ‘relocated’ by Sarawak Energy have discovered that their advertised new homes have not yet even been built. 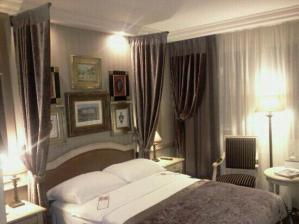 Accommodation at the Geneva Hotel Royal is clearly more comfortable than the prospect of an 8 hour road trip to the Murum blockade side.

Since highly paid Nick Wright is in charge of the SEB Resettlement Programme, many in Geneva wondered why he was busy conducting PR on the world stage, instead of helping families made homeless back in Sarawak?

Tempers were not improved when the highly paid energy boss failed to take the opportunity to engage with NGO concerns at the follow up discussion session scheduled for the next day.

After agreeing to come he simply neglected to show up.

The contrast between the luxury Hotel Royal he was booked into in Geneva and the pitiful, barren settlements into which Sarawak Energy have moved these hunter gatherers was also noted.

In SEB’s resettlement site in Tegulang, for example, up to three families are being forced to share space in just one longhouse pintu, because of the shortage of new homes for the Murum Dam refugees.

Since the area is a desolate, abandoned palm oil plantation, miles from anywhere, there is little opportunity for these communities to gather food or to buy anything with their below subsistence compensation of RM800 per family per month.

So SEB have dumped a months ration of rice and oil on the doorstep of these longhouses and told them to survive on that! 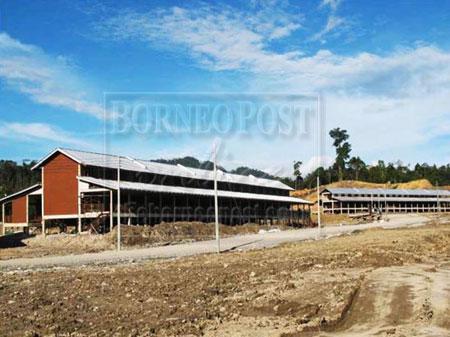 The reality behind Wright’s report promising a new model village with schools, farming, clinics, training and modern comforts. Rice was dumped on the doorstep.

to tear down and burn these communities’ homes before the “immediate improvements” in their standard of living were even fully constructed?

And where are the promised schools, clinics, farms and training centres featured in Nick Wright’s glossy report prepared for the UN?

We ask again, how would he like his own family to be dumped with a bag of rice and told to get on with it under such circumstances?

As for those who have refused such ‘compensation’ and set themselves up in tents to blockade the dam site, surely they deserve better than to be confronted and terrorised by battalions of fully armed riot police?

Nick Wright did not turn up to answer such issues and they do not feature at all in his glossy report to the UN’s Human Rights Council, despite the fact they have been raised by concerned NGOs in numerous submissions about the record of the Sarawak State Government. 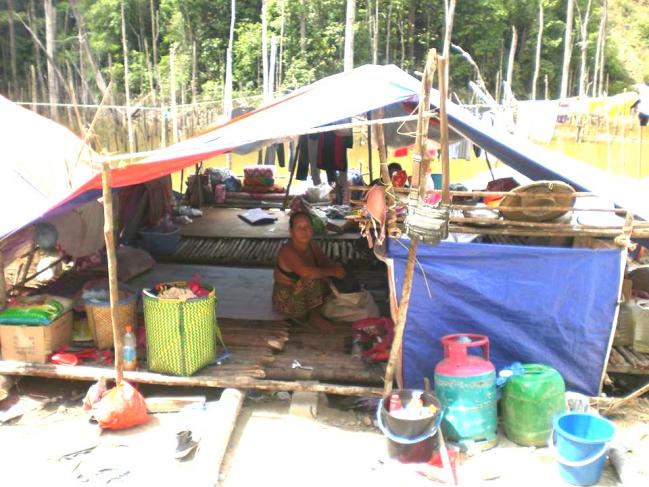 Time for Nick Wright to risk a visit to the ground zero – the Murum Dam blockade site?

Sarawak’s oral statement to the UN Human Rights Council, which is conducting a periodic review of Malaysia’s human rights record, was made by the former Attorney General J C Fong, one of Taib’s favourite trouble-shooters.

However Wright was clearly responsible for drawing up the written submission and he appeared in the Geneva assembly clutching his copy of the carefully worded report.  It suggests promises, but confirms nothing in the way of benefits to Sarawak’s native communities. 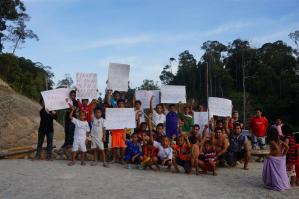 The report claims, for example, that Sarawak has “adopted best practice” by “incorporating within its project development model” the International Hydropower Association’s (IHA) Sustainability Assessment Protocol.

That would seem to imply that Sarawak is therefore implementing best practise, when it comes to building dams.

However, NGOs have pointed out the IHA protocol represents no more than a tool for measuring the levels of good practice, against which Sarawak rates very low indeed.

Wright himself effectively acknowledges how meaningless this adoption of the protocol is, with the modest conclusion that it “has increased the capacity of its staff to understand the linkages of the Protocol and related human rights issues with each phase of the project”.

Such waffle is far from actually implementing best practice!

The report entirely fails to mention that the Murum Dam was constructed and completed before gestures towards community consultation or compensation agreements were even attempted.

Nor does it admit that the social environmental impact assessments were not published until after the completion of the dam.  Far from being objective, these were controlled by a government agency, the NREB, which is headed by the Minister for Resource Planning, Taib himself.

Likewise, on the subject of Land Rights, Wright has attempted to argue that the Sarawak State Government has been an eager defender of native land rights, when the rest of the world knows the opposite is true. 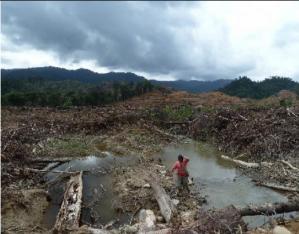 Good hunting? – NGO Global Witness has reported that much of ‘protected Danum Linau’ has been destroyed by Taib crony company Shin Yang

It claims the Penan have been offered “access” to 19,500 hectares of ‘protected forest’ in Danum Linau.

Yet, in reality much of this area has been clear-felled by Shin Yang and the rest is distant and degraded.

The promised “immediate improvements” include a “good quality” longhouse pintu for each family; subsidised water and electricity; a place of worship (not specified as a church, however); health care; primary schools; community training and government support in cash and kind.

Yet the immediate reality is an unfinished building site with no amenities and little space.

Wright’s submission to the UN also fails to specify that the promised “government cash support” is well below Malaysia’s minimum wage and due to last less than 4 years (for a distant and isolated community with virtually no transport and hours from any shops).

Meanwhile, the so-called “support in kind” has consisted of the bags of rice and oil, which were dumped by SEB on the doorstep.

As for subsidised utilities, Sarawak’s natives have had long experience of such government promises: 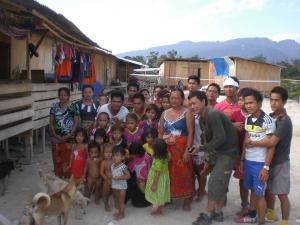 What future for this community that has been dumped?

Communities across the state have been cut off because they simply cannot afford to pay these ‘subsidised’ prices for amenities that were once available from unpolluted rivers by their longhouses.

Neither have there been any reported sightings of the promised teachers, trainers or medical workers  anywhere near these resettlement sites, despite Nick Wright’s fulsome promises about immediate and massive improvements.

And, given similar promises of modernisation were made by Taib when he took the timber and then cleared the land for oil palm these native people are right to be sceptical.

The State of Sarawak’s UN report (plainly written by Nick Wright) also makes the laughable claim that the Baram Dam has not yet been decided upon.  Even though equipment and workers have been moved into the area, signs have been put up and work has started to get under way. 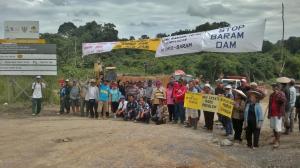 For this reason, the news of the native blockades to chase off workers already arriving at the Baram sites last week was not helpful in Geneva.

While crowds of local people protested in Sarawak, SEB tried to maintain the fiction in Geneva that full consultation processes, feasibility studies, customer demand and comprehensive Social and Envronemental Impact Assessments would come before any such construction work began.

NGOs invited Nick Wright to join their dialogue session after the SEB presentation in Geneva.  However, despite all his talk of engagement, he shunned the opportunity.

“He seems extremely awkward and uncomfortable” reported one NGO delegate, “it appears that as usual SEB were there to talk, not listen”.

UN delegates have made the following recommendations to Malaysia as a result of the periodic review into their human rights record:

Denmark concerned about Malaysia’s lack of free, prior & informed consent in the expropriation of indigenous customary land

Venezuela asked Malaysia to focus on poverty eradication especially among Orang Asli in Peninsular and natives of Sabah and Sarawak.