Dayaks Pay For Sarawak's Education, But How Do They Benefit? 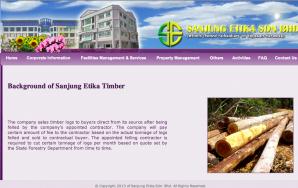 The term ‘Dayak’ has been pronounced a non-word by state ordinance, on the basis that the tribal people of Sarawak should no longer be encouraged to think of themselves as a nation, but only as groups to be divided and ruled.

Yet, how else to collectively describe the native people, who are surrendering up their vast natural resources to enrich West Malayisan leaders and their agents in Sarawak (Taib Mahmud and his BN cronies)?

BN’s latest budget says it all: RM76billion is to be extracted from the state, while RM2billion only will be re-invested in development and infrastructure in this most backward area of Malaysia.

Meanwhile, RM16billion is allocated for the Malaysian PM’s private office!

A typical example of the problem was raised earlier this week, with yet another NCR land grab case brought by people from Kapit, the villages of Rumah Ugoh, Sungai Entuloh in the Merirai Baleh area.

Timber concessions over 2,688 hectares of their native customary lands have been handed by Taib’s Forestry Department to a company called Sanjung Etika Sdn Bhd.

Since 2010 this company has been tearing down their forest and refusing to even discuss compensation.  According to a spokesperson, Jesse Jimbon, who spoke to the Borneo Post:

“In 2010, those responsible just entered our land and logged the area without informing us or giving us any compensation. So, we made complaints to various authorities in Kapit such as the police, Land and Survey department and district office about the trespassing, but no action was taken against them,” [Borneo Post]

The villagers set up blockades to prevent the defendants from trespassing their land, but these were ignored.  Their lawyer, Abun Sui Anyit, told Sarawak Report:

“The longhouse folk have attempted a dialogue with the defendants on the issue but the negotiations failed, making no other option but to seek a court decision”

So, who are behind this company, which has adopted such familiar bullying tactics, of the sort that has caused misery and great financial loss to the Dayak people up and down the land?

It turns out that Sanjung Etika Sdn Bhd is one hundred per cent owned by a public body, namely the Sarawak Foundation/ Yayasan Sarawak, which was ostensibly set up to promote the education “of all races”, according to its own corporate video, back in 1971. 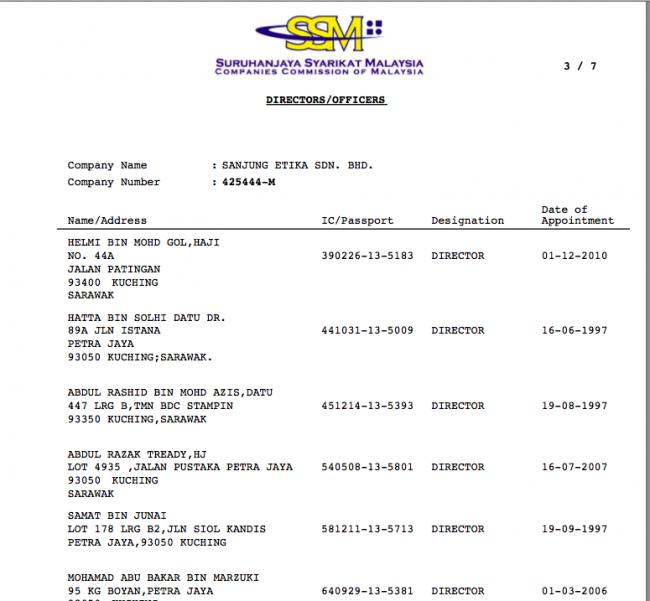 The Directors of Sanjung Etika Sdn Bhd are all members of the board of management of Yayasan Sarawak, the 100% shareholder

Sanjung Etika has sub-contracted the logging operation to another familiar entity, the Taib timber crony Lau family of KTS, who own the contractor Recent Timber Sdn Bhd. 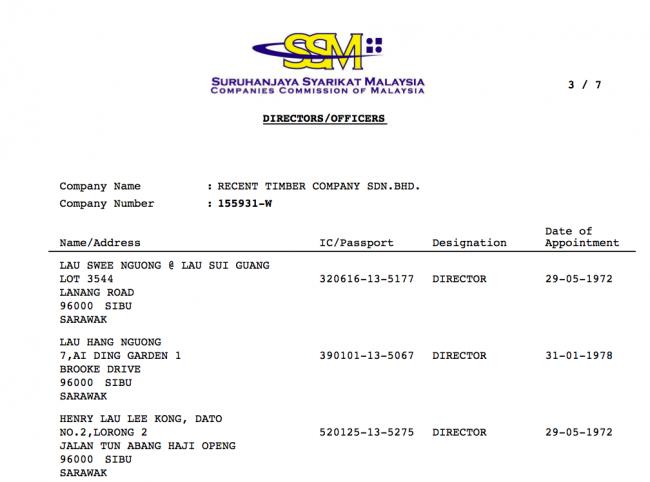 What benefit to the Dayak people?

The idea behind this system of handing timber concessions to public bodies like Yayasan Sarawak and other similar outfits, such as the Islamic Trust, is to fund their beneficial activities.

However, the objections are numerous.  First, why should a public body make money out of exploiting private territories?  Second, where is the accountability? 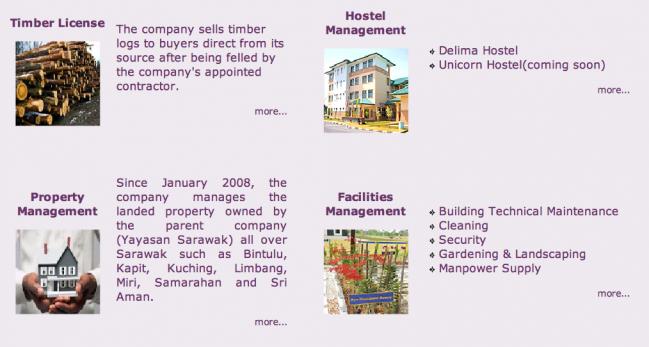 A large swathe of properties and businesses have been handed to this Yayasan subsidiary, so where are the accounts?

The Sarawak Foundation has not provided any public information about how it manages these handouts from Taib’s Planning and Resources Department and made no attempt to interface with the people whose land it is destroying.  They simply handed the job over to a notorious logging enforcer, the Lau family.

If a public company is expected to publish its accounts and detail its assets and activities, why shouldn’t a public body be expected to conduct itself in the exact same way?

This is the case in all law-abiding democracies, so why not in Malaysia, which likes to count itself as one?

And there is another very troubling aspect to this matter.  The money fund the Sarawak Foundation may come from exploiting Dayak territories, but very little of the educational benefit is being fed back into their communities. 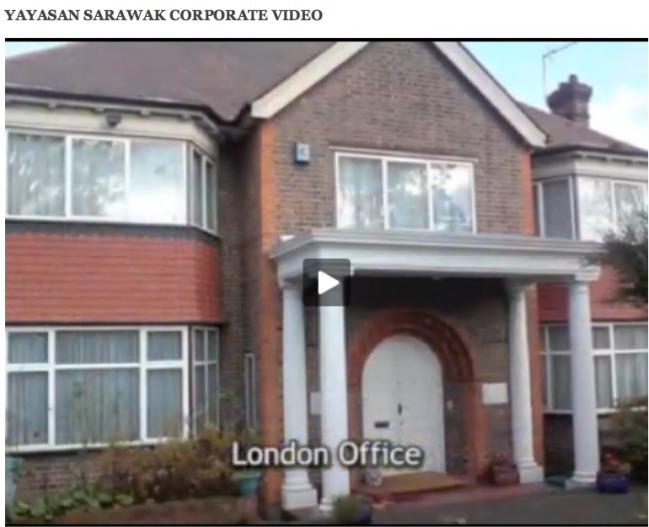 The stated purpose of the Sarawak Foundation is to pay for scholarships, often abroad, to improve the skills of all communities in the state.  Yet, it is a well-known problem that very few of the native Dayak races get the opportunity to take up such scholarships.

It is the children of well-connected Muslim families and some Chinese who time and again have received the lion’s share of the opportunities, paid for by the assets of the poor rural communities.

It is not hard to see why this might be the case, when one looks at the line-up of the chief officers of the Foundation, appointed to its Management Board by Taib Mahmud. 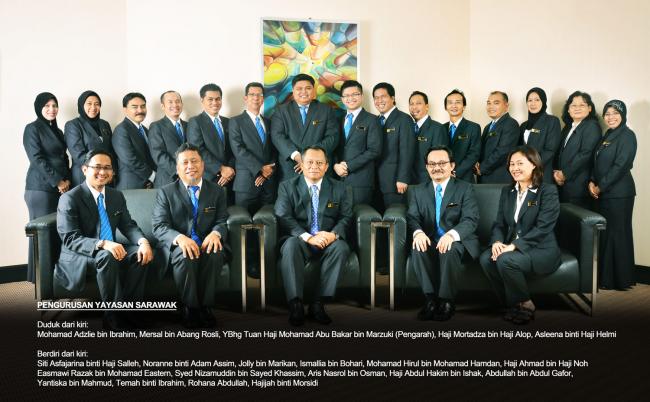 Muslims may be a minority in Sarawak, but there are zero non-Muslims on the management board of the Sarawak Foundation and not a single native Dayak!

With a line-up like this how can the Sarawak State Government of Taib Mahmud begin to claim that it aspires to  equality of opportunity for all races?

And what cheek, given the money for all these lovely jobs is being sucked right out from the soil of the native peoples of the state!

Of course, Taib has indeed appointed ONE Dayak personality to sit above all this on the Foundation’s Board of Trustees itself – guess who?  None, other than the wife of Taib’s Chief Dayak crony Alfred Jabu.

It is men like Deputy Chief Minister Alfred Jabu, who have made a decision to sell out the interests of his own tribal people in return for fabulous riches, lands and contracts handed to him by Taib. 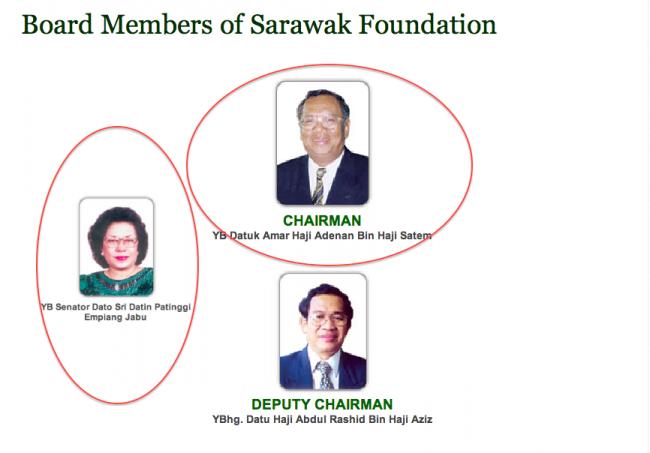 Well under Taib’s control – Mrs Jabu is on the Board, which is headed by Taib’s loyal brother in law Adenan Satem

Mrs Jabu is of course the Director of a number companies that have been handed fat contracts by the state, along with her two daughters and of course Jabu’s nephew and son, as we have outlined in a number previous stories.

So, little surprise that Mrs Jabu has been carefully selected to look after the interests of native Christian Dayak children who are also desperately hoping to succeed in school and further education, alongside more privileged Muslim and Chinese classmates.

And even less surprise that the figures show a woeful lack of success for these communities in gaining scholarship opportunities from the Foundation.

While every year Sarawak resounds with tales of distress from students, who either failed to gain scholarships they should have received or found themselves discriminated against because of religion or race, the statistics show just how little progress Taib has made in achieving his apparent boast of improving the development and skills of native people.

First, consider the plight of children from rural areas, who Sarawak ought to be able now to better educate:

Then, consider the State of Sarawak’s own statics, which show that while Ibans in the labour force represent 30.5% of the population, only 15.5% have obtained further education.  This compares to the Malays, who have more than double the number of graduates, although a smaller population. 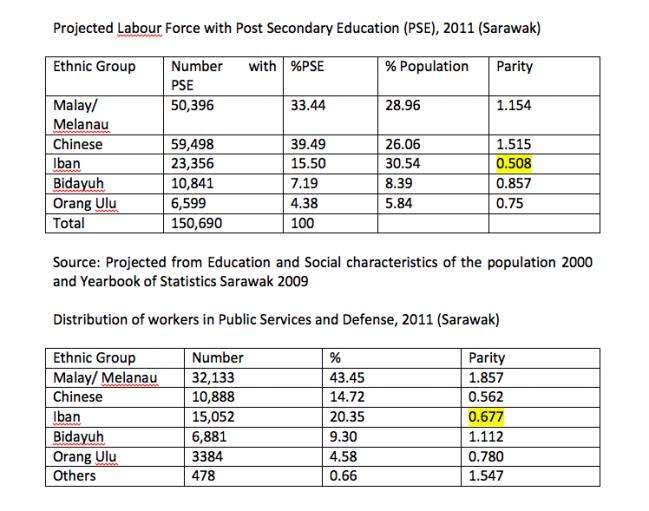 Disparity in educational attainment – testimony to the failure of over 40 years of investment in the Sarawak Foundation!

Likewise, it is the Malays who dominate the public service sector when it comes to jobs.  If the Dayaks are being forced to give up their lands to Yayasan Sarawak (although this may very well be proved yet again to have been an entirely illegal land grab in the up-coming court case), surely they should be seeing a return in an at least equal education chance for their children?

And Sarawakians have the right to see a published list of the scholarship winners being handed public money raised from the people of the state, so we ask Yayasan Sarawak to publish it.