The Taib family company CMS proudly boasts of its “vast land bank” in its annual reports and has started selling off chunks for tens of millions in Kuching.

Commercial centres and grand housing estates are also being developed in two key areas, Bandar Samariang, where CMS has 5,200 acres, valued around half a billion ringgit, and of course on the Kuching Isthmus, where land is even more expensive.

But, how did CMS acquire all this property and who has benefitted?

Sarawak Report has acquired shocking information about the way Taib and his family members have profited from this land, which was forcibly taken (official term is ‘alienated’) from local people and state ownership.

We did it to help the poor

The story that the Chief Minister told from the start was that this was land that was difficult and expensive to develop, but that his family company was kindly determined to provide housing for poor people.

Back in 2001, he even made out that CMS was doing this supposed favour in Bandar Samariang entirely “for the people’s benefit” for “not much profit”, because other developers didn’t want to get involved in such a loss-making venture!

Sarawak Chief Minister Tan Sri Abdul Taib Mahmud denied yesterday that the development projects implemented in the state had benefited him personally as alleged by some quarters. Stressing that the projects were for the people’s benefit, he urged them to think rationally all allegations of nepotism and cronyism which were levelled at him before making any conclusion….he cited as an example the low-cost housing project in Rampangi, Semariang of which he was accused of benefiting personally. Taib.. said the project did not bring much profit to the developer Cahya Mata Sarawak Bhd due to the peat soil condition. Not many companies wanted to invest in the project because of the high cost involved to prepare the site for the project, he said. But in the interest of the people, the project had to be carried out to provide housing to the low income group, he said. “We do not want them to remain without houses and live far away from the city. That’s why we continued with the project,” he said.[Bernama Sunday, April 08, 2001]

Such a kind old fellow! 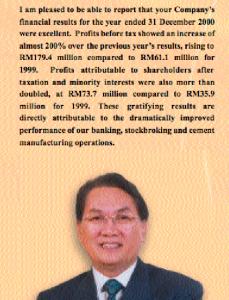 Interestingly no mention has ever been made again of these poor soil conditions by CMS.  This is probably, not least, because in every other country in the world, developing tropical peat soil has been banned, because of the severe environmental consequences.

To gain a sense of the value of this land handed to CMS in the guise of helping the poor, consider the recent news that the company has decided to sell on a parcel of 500 acres for over RM45million to Sentoria Group to build a theme park.

Suddenly, another developer has been found willing not only to take on the job of developing the land, but to pay big money for the plot.

However, this time of course the money has gone to CMS, not the government or the people from whom the area was ‘alienated’.

At the time CMS got this land for free it was largely owned and run by Taib’s brother Onn Mahmud, who shortly after passed on his shares to Taib’s wife, with the remainder being largely in the hands of the Chief Minister’s four children.

No nepotism at all then!

Sucking money out of pensions too 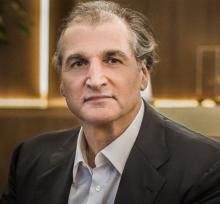 But, of course, the Taibs didn’t really want to invest their own money in this mission to assist the poor with ‘quality low cost housing’.

Far better to use their influence to encourage the government controlled Employee Provident Fund (EPF) to put in the money instead.

After all, this fat milk cow has been used to pour vast sums of money into endless pet projects to benefit BN politicians, meaning public employees can look forward to far lower pensions, despite being forced to pay a quarter of their salaries into the obligatory savings fund controlled by the government.

EPF therefore was dragged into a joint venture with CMS and the investment in the “low cost housing” in Bandar Samariang began.

But, in fact, low cost housing was only ever planned to form a small part of the project from the very start.  The original terms of agreement, as explained in CMS’s own annual reports, made clear just 1/3 of the area was to be housing for the less well-off.

Housing for the poor?

The rest of the huge site was to be developed as an ambitious commercial enterprise.

CMS’s 1997 Annual Report was certainly not bashful about the profit-driven nature of CMS’s latest housing project or the ambitions of its new Property Development Division, headed by the new husband of Taib’s sister Raziah, the Lebanese Australian, Robert Geneid.

It also reveals that, thanks to Taib’s ability to pull the strings, that the State Housing & Development Commission had already been tasked with buying whatever ‘quality low cost housing’ CMS Property produced on the site, ensuring a guaranteed profit.

“This is a new growth area for the Group, and CMS Properties Sdn Bhd has been set up to develop and manage the Group’s vast land bank, with the long-term objective of becoming Sarawak’s principal property developer and a major player throughout Malaysia and the ASEAN region. The Group’s strategy is based on using the natural synergy between the infrastructure, finance and property divisions….

Bandar Baru Samariang is a joint venture with the Employees Provident Fund (EPF) and will be the largest low-cost housing project ever undertaken in Sarawak, and the first housing development project undertaken by the Group.

The 13,500 low cost houses (approximately 36 percent of the project) will be sold to the Housing & Development Commission……The remaining 64 percent of the project will comprise medium-cost homes, commercial centres and ancillary buildings, providing a total of 42,200 housing units on the vast 5,200 acre site just 15 km from Kuching. Phase 1 of the township is currently being implemented, to provide over 4,000 units of low-cost housing, as well as hundreds of other residential and commercial properties.”[Ann Rpt 1997]

So, in fact, a mere 4,000 units of the token low cost housing have been included in the first phase of the project, all promoted in the beginning in a blaze of positive publicity, before CMS moved speedily to the much more lucrative “medium cost” housing, where units are currently being sold for the very fancy prices of anything up to half a million ringgit! 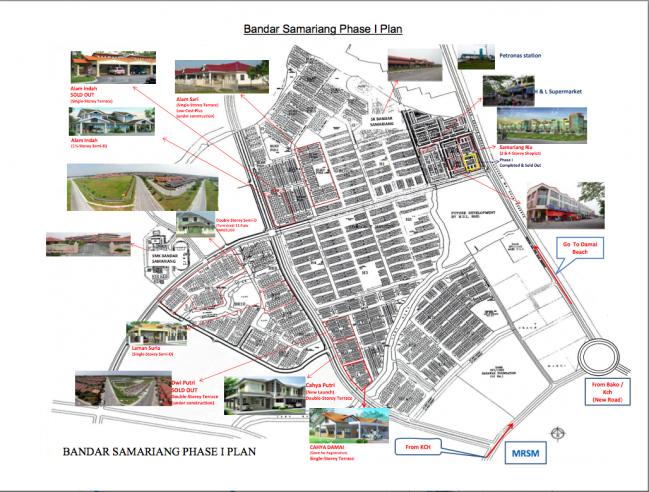 Phase 1 – including 4,000 low cost housing units guaranteed to be purchased by the Housing Committee

Of course, the fact that the state has ploughed in major infrastructure, in terms of roads and amenities into the area, has made the development potential of this project ever more lucrative.  Yet, the Chief Minister is still justifying his handing of it all to his family in the name of charity for Kuching’s poor! 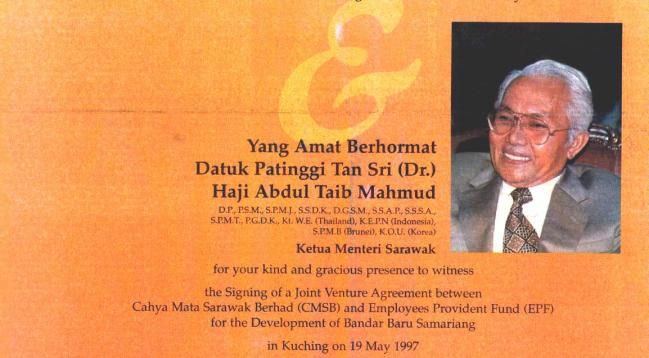 However, this mother of all land grabs from the Sarawak people is just the start of the story of how the Taib family set about enriching themselves from this project.

In ‘Phase 2′ of our investigation we will be looking at how individual members of the Taib inner family circle, set about using the massive housing project to develop profitable businesses for themselves, with disastrous consequences for the very poor people in whose name the Bandar Samariang land grab was executed. 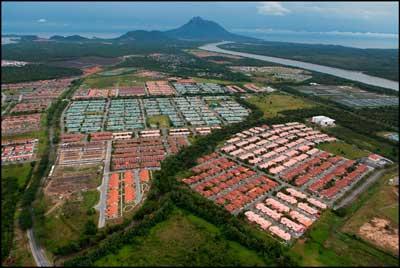