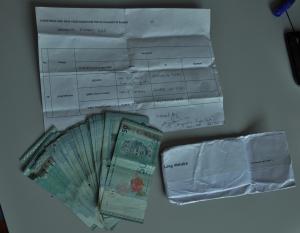 They then made their way up to 33 villages in the Baram area, a region fraught with conflict over the company’s planned dam building programme.

On arrival, according to testimony handed to the police, the state company employees asked to be taken to senior people in each village, to whom they were wanting to hand a ‘Christmas donation’ of cash (see picture).

“They explained that they wanted to pay for a party”, says Peter Kallang, whose NGO, Save Rivers, has been at the forefront of protests against the controversial Baram Dam.

“The money was not to be split up amongst folk, it should be spent on buying lots of food and beer for the community”.

But, the village people proved unimpressed by the gesture.  One delegation from Long Mekaba made a police report in Miri on Friday, complaining of attempted bribery. They also deposited the RM3,000 they were handed by SEB, which they have declined to spend.

Sarawak Report has heard that another village near Marudi plans to do likewise and that there may be further such reports in coming days.

“They are very afraid of receiving this money because they don’t want the Baram Dam, which Sarawak Energy want to build.  They don’t want to use this money, because SEB  may say they are in favour of the dam” explained Kallang, who was contacted by villagers before they made the police report.

The concern is understandable.  Native tradition is strong that if you accept money you should return the favour.  It is a morality that is ruthlessly exploited at election time when wealthy politicians hand out small sums of cash to buy votes all over Sarawak.

However, in a matter of such importance as this, the impoverished villagers have this time decided to foreswear the much needed cash in order to avoid any sense of obligation to the company. 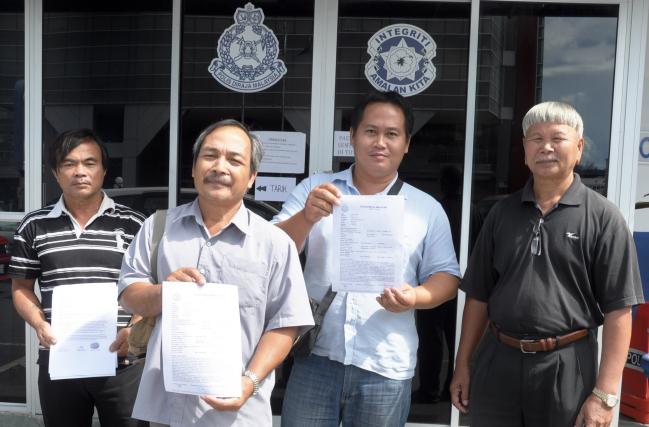 Handing in the police report and the RM3,000 to Miri police station – Headman of Long Mekaba, Lejau Tusau (right) and 3 other villagers.

It’s what they call ‘consultation’

This extraordinary episode raises several extremely serious questions for Sarawak Energy and its flamboyant CEO, the Norwegian Torstein Dale Sjotveit, who has loudly claimed to the world media that his company adheres to the ‘highest international standards’ in managing its dam building ambitions. 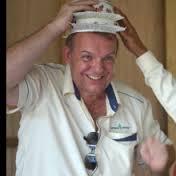 Torstein Sjotveit – SEB CEO must take responsibility for the exercise

With the police report now lodged he must explain why this publicly owned company was offering cash to individuals in Baram?  Also, what public notice was given, what due process adopted and what justification provided?

After all, the whole of Sarawak would be pleased to receive a Christmas rebate from their electricity company, so on what grounds were these villages in the Baram region singled out?

‘Datuk Torstein’ needs to provide immediate answers, because the accusation of bribery seems very convincing when we are talking about the very villages that are at the heart of the resistance to his company’s dam building programme.

Campaigners say the Christmas Santa scenario is a familiar tactic that was used by the company to control native opponents to the previous Murum Dam, completed at the end of last year.  The native Penan only mounted a resistance after they realised they had been tricked into allowing the dam to be built without a clear compensation package in place.

“Giving out money and food is what they call consultation”, says Kallang.  “When we challenged SEB that they had not carried out a proper consultation process with the Penan over the recent Murum Dam, Mr Sjotveit countered that they had performed 80 consultation exercises. What they were actually doing was sending ringgit and food up every month to the villagers.  This is not consultation, but it kept the Penan quiet until it was too late to stop the dam and now they are trying the same strategy with the people in Baram”. 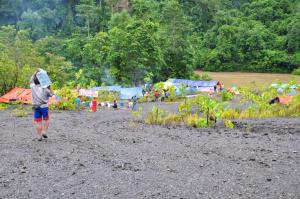 The Baram folk have maintained two blockades for weeks, succeeding in halting SEB’s plans to begin construction in advance of any consultation process.

Clearly, there are several people in Baram who do not call this consultation either, but rather bribery and the sophisticated European is going to have to come up with something that trumps their simple logic.

The recent sad and bitter conflict over Murum has certainly made it hard to SEB to play the same game twice, as the native people of Baram see it.

These communities have made clear they do not wish to be enticed by similar strategies.

According to Peter Kallang:

“For five years SEB went up to the villages at Murum and told them all their problems would be settled and gave them food and money.  But, just before the dam was impounded the people found out how meagre their actual compensation was going to be and they suddenly blockaded the dam site.  But, by then it was far too late.  They held out for 77 days, but the dam was built and they were defeated. 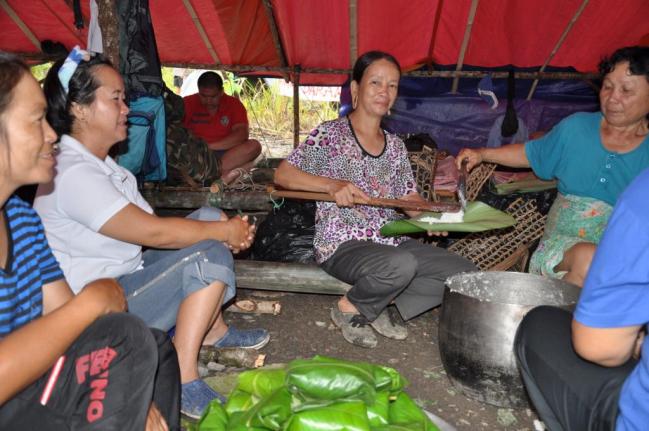 Community spirit has kept up a permanent presence at both blockades

“SEB are this time trying the same thing, it is clear, but it is a mean trick and the people in Baram are now aware”, observes Kallang, who has been in regular touch with the Baram blockaders who have been preventing SEB from even starting work on the new site since the middle of last year. “SEB even sent up teachers to help the children at Murum. But, now the Penan have been moved the schools are not even ready. If they were really concerned that would have been a priority”.

The sum of money left blank

Based on the amount of RM3,000 that was offered as a donation by SEB employee Augustine Supen Taja to the villagers of Long Mekaba, the Baram folk have concluded that the company convoy was carrying at least a hundred thousand ringgit to donate to the 33 villages included in this ‘Christmas Santa’ visit.

However, they can’t be sure, because the actual sum handed out was not recorded in the forms they were asked to sign as a receipt. 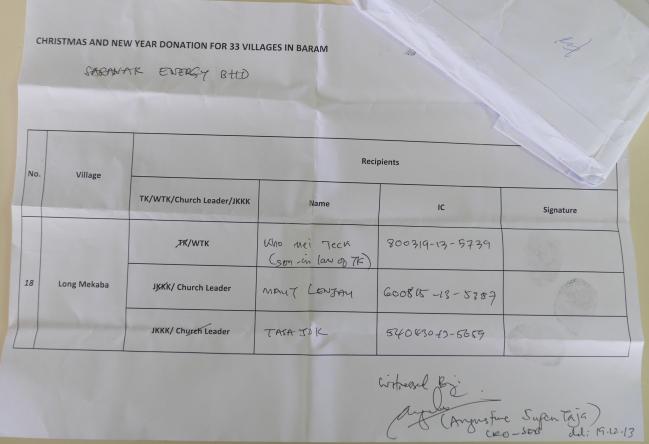 Witnessed by SEB employee Augustine Supen Taja – but no mention of the sum received!

The villagers have handed in a copy of the receipt they were required to sign as part of the evidence behind their police complaint.  It shows clearly that the company was targeting Tuai Rumah (TR) or their deputies and Church Leaders in the community to hand their donation to.

Their names, signature and ID numbers were required and then counter-signed by SEB employee Augustine Supen Taja.

However, the amount of money they were signing for was left blank.  Does this indicate a reluctance on the part of SEB to acknowledge in writing the nature of the transaction?  If so, does it not leave a system that is open to abuse?

Since this is a public company SEB should announce how much was put aside for this public relations exercise, so that the 33 villages (and indeed the rest of Sarawak) can compare it to the sums they actually received!

“They specifically targeted Head men and Church Leaders” says Kallang “because these are the key figures in the communities whom they will be seeking to influence over this matter”. 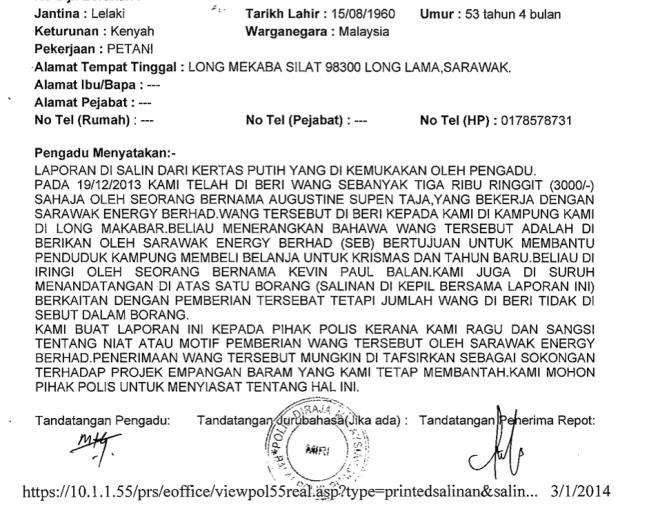 Kallang says that he has frequently visited villages in the areas which are being affected by dam proposals and found cans of beer lying in heaps around the kampung.

SEB had been up before hand, distributing alcohol and food: “this is typical, it is what they do, bring lots of beer to make them intoxicated so they forget their worries”, he told Sarawak Report.

But, the 20,000 people of the Baram region, who stand to lose their homes if the controversial dam is built are clearly going to present a considerable challenge to SEB and their ultimate boss, the Chief Minister Taib Mahmud, whose family companies stand to make billions out of the building of the dam and a spate of factory projects planned in the so-called ‘SCORE corridor of energy’.

One tactic has been to engage local Baram people, like Augustine Supen Taja, to win over community leaders.  He and his bosses deserve to be thoroughly investigated. 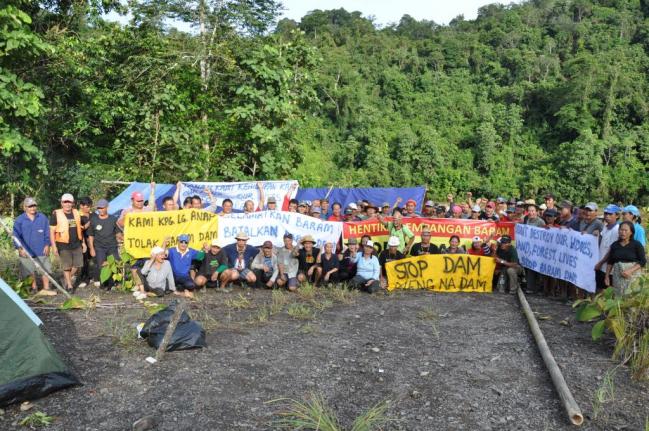