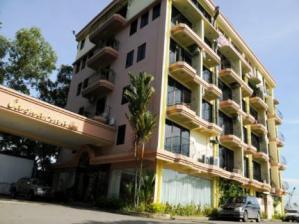 Forest Department staff, who are supposed to monitor the activities of timber companies, regularly concoct false reports from seaside hotels, instead of conducting genuine ground checks, Sarawak Report has learnt.

Insiders have confessed to the practice, which they say is orchestrated by the major timber companies, who spend thousands of ringgit a week entertaining the Forest Department officials and paying them ‘pocket money’ to keep them from doing their job of guarding against illegal logging.

One former worker at a major timber company operating in the Baram region told us that the vast majority of the company’s logging in the area is unauthorised and that in order to keep Forest Department staff from viewing the extent of their illegal operations the company would go to extreme lengths to keep them out of the area.

Can you give us a lift?

A key weakness in Forest Department practice, which the company is happy to exploit, is the willingness to allow its officials to rely on company transport to get to the areas they are supposed to be checking.

Before every inspection trip the Forest Department official rings the company to notify they would like transport and then a discussion takes place.

“They would ring to say they want to check a coup, but all along the road to get to the area you can see the unauthorised activity.  So, we say we can take you to the area tomorrow, but bring your passports. Instead, we would take them to KK and go to one of the nice hotels, like the Casuarina in Tanjung Aru beach”

The group of officials from the Forestry’s ‘Preventative Department’ would then spend the entire week enjoying casinos, drinking and other forms of entertainment at the resort, thanks to regular ‘pocket money’ supplied by the timber company.

A timber industry insider told us that the timber company’s top managers were well aware of what was going on and that the petty cash department would allow them to take thousands of ringgit to cover each trip.  The Chief Executive of the company was well aware too:

“We had to avoid the Forest Department seeing the extent of the unauthorised activity, because they would exact such big penalties, so, it was better to do the negotiations away from the area”, the company employee explained.

According our sources all the major timber companies in Sarawak employ similar tactics to subvert reports by Forest Department ground staff.  These have an official salary of RM3-4,000 a month, but can inflate their earnings  up to RM20,000 through cash bribes.

“They can’t bank this money, which they get in cash. We call it money under the pillow”

On certain occasions one timber industry worker admitted, his company would even fly a group of forest guards to Manila to keep them away from their proper duties.  Asked if he felt guilty he responded :

“Yes, I didn’t really enjoy taking them, some of the officials were single, but many had wives”. 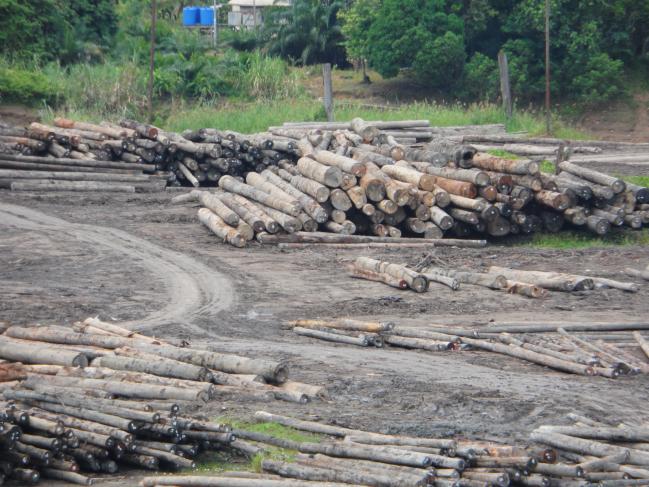 Log pond – no traceability to show whether the timber came from authorised or unauthorised areas.

On paper everything is proper, but 90% of it is lies

Ludicrously, our informant described how during the course of their week at the seaside the forest officials would retire to their rooms to do their “homework”, in order to complete the paperwork required of their trip.

“They know exactly how to fill in the forms, so they make up the whole thing.  We call it ‘on the table homework’ ie not on the ground, as it should be.  The Forestry Department bosses know, everybody knows it.  All the companies, but they zip their mouths.  No company in Sarawak is doing good timber extraction.  It is all illegal.  On paper everything is proper, but if you come for real 90% of it is lies”.

One fundamental flaw in the system is clearly the Forestry Department’s reliance on exacting penalties to resolve unauthorised logging practices by Sarawak’s major concession holders. 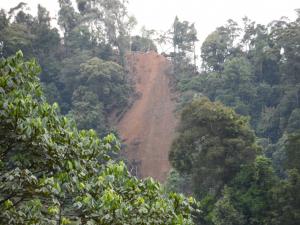 Severe erosion all over the Baram area caused by unsustainable practices and unauthorised logging – which represents 90% of the logging.

This practice is so open to abuse that it has become a standard method for bribing officials and represents a mere tax on the companies’ illegal transgressions, rather than any form of deterrent.

According to our informants 90% of the logging in Baram is conducted outside of the authorised concession areas, which have already long since been exhausted by unsustainable practices.

Habitual offences include the logging of coups within concession areas where Permission To Enter permits have not yet been issued.

In such cases the timber company camp managers will merely provide misleading information about the source of the logs.

By the time the logs have reached the log pond their origin is impossible to trace, owing to the poor practices in monitoring by the state. Most of these logs are then sent down river and the majority are exported to Japan, where buyers and government departments are still willing to accept Sarawak’s certification practices at face value. 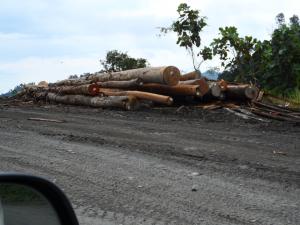 Logged out – unsupervised logging is visible all along the roads in Baram region.

The only counter activity carried out by the Forest Department guards and monitors is the subsequent counting of stumps left in unauthorised areas, which have clearly been stripped by companies that have transgressed their concessions.

These incursions even include protected forest areas in Baram, such as native lands, national park areas and river buffer zone and valuable protected species, such as the Tapang tree are also being cut down and then mislabelled to disguise the illegal activity.

To penalise such violations the Forest Department will count the illegal stumps (or pretend to count them, in the case of the guards who are actually partying in KK) and then calculate a fine on the company on the basis of around RM200 for a normal tree and up to RM2,000 for a protected species like Tapang.

Can you do us a deal?

However, the penalty is always a matter for ‘negotiation’, insiders have explained to Sarawak Report.  The timber company will always ask for a ‘discount’, which will involve the halving at least of the fine and large cash kickbacks for the official themselves and their bosses.

As the officials have often not even visited the area at all the numbers of ‘counted stumps’ are often completely made up to begin with and way beneath the real extent of the problem. According to the industry source:

“Say they have ‘counted’ 1,000 unauthorised stumps. This should make a 200,000 ringgit fine.  But, they negotiate, so maybe an RM80,000 fine and then RM10,000 each to the Forest Guards and maybe RM20,000 to their boss.  But the actual licence is never suspended and although the stump fine is RM200 each, the actual value of the stand was RM3,000-RM4,000, so there is no real punishment ever for the timber company which is making billions out of this unauthorised logging”.

It is a state of affairs which sums up the poor governance of the timber industry in Sarawak and explains why the EU trade negotiations have stalled with Malaysia over timber, specifically from Sarawak. 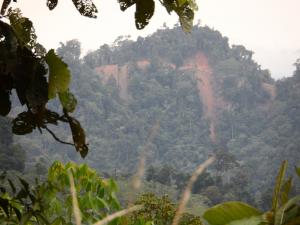 What remains of Baram’s once unparalleled jungles.

The state government has refused to amend its practices, in order that such abuses could be addressed and so that the origin of Sarawak timber can be properly accounted for.

Little surprise therefore that Sarawak is still the world’s biggest exporter of timber, providing more hardwood than the rest of the world’s tropical timber exporters added together.

Local inhabitants say that the current state of the forests in the Baram area have reached such critical levels of depletion that the major company in the area has started cutting down protected trees that were once left alone in visible areas near to roads.

Levels of erosion in this hilly region have reached disastrous levels, with hillsides collapsing in mudslides into the once pristine rivers below, killing the river life and removing the thin soil layer from the jungle regions.

Sarawak is facing an environmental catastrophe thanks to the lazy officials who prefer the beach to their jobs and to the ruthless timber companies responsible for corrupting them.

But, above all, the responsibility lies with the deliberate negligence of the State Government of Taib Mahmud.

No one has benefited more from the lucrative backhanders willingly provided by the major timber companies to anyone willing to turn a blind eye than the Chief Minister of Sarawak, who described his own personal wealth of billions as being “more than I could ever spend”.