Top US Study - SCORE Is The Worst Way To Develop Sarawak!

A study by American scientists from the top California University of Berkeley has concluded that instead of building mega-dams, the Sarawak government should focus on small-scale energy sources for developing rural areas.

The study will be presented tomorrow at the ASEAN ‘Renewable Energy Week’ in Kuala Lumpur and it follows another similar study conducted by Oxford University in Britain, which also criticised the addiction of small time dictators to large scale mega-dams as a waste of money. 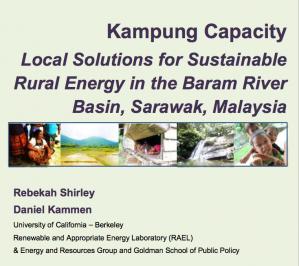 The report, which is entitled “Kampung Capacity – Local Solutions for Sustainable Rural Energy in the Baram River Basin, Sarawak, Malaysia” takes the argument about the benefits of large scale hydro-power projects straight to the door of Sarawak Energy and its overpaid boss Torstein Dale Sjotveit.

Sjotveit meanwhile, stands accused of corrupt practices over handing out hundreds of millions of dollars of SCORE related contracts to his boss Taib Mahmud’s family companies.

According to the Swiss NGO Bruno Manser Fund, which has exclusively pre-viewed the report, the scientists demonstrate that:

“Small-scale energy solutions are more likely to translate into electricity access for the affected and nearby communities than large hydropower projects. The Bakun Dam shows that mega-dams mainly bring power to urban areas and feed large industries, while villages in the rural areas – even those next to the Bakun dam – remain without access to electricity.” [BMF Press Release – 23rd April 2014] 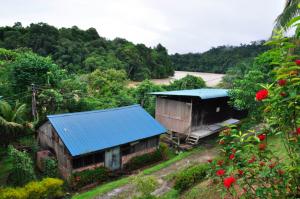 The study analyses different energy scenarios based on small-scale energy solutions for three villages in the Baram area and finds “the least-cost options for energy services come from a mixture of locally managed small-scale hydroelectricity, biogas generators and accompanying batteries”.  A whole range of tested “different renewable energy service scenarios are consistently 20 percent, or less, than the cost of diesel energy scenarios, without the social, economic, and environmental disruptions that would come with a large-scale hydropower plan for the river basin.”

Listen to the natives 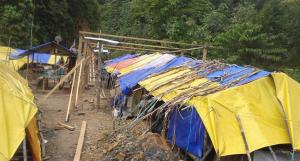 Camped out – permanent blockade at the planned construction site for Baram Dam.

These latest top scientific interventions cautioning against the foolhardy nature of the Baram Dam and other SCORE initiatives add to the growing political problems posed.

The tens of thousands of native people, who stand to be displaced and who are concerned about the relentless destruction of Sarawak’s unique environment and river systems, are showing no sign of being pacified or allowing Sarawak Energy construction teams to move into the areas they have blockaded.

Sarawak’s lamentable record of breaking promises to native communities over previous dam projects does not stand in the company’s favour. 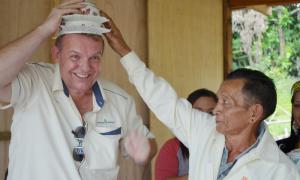 Sjotveit posing with the headman who later accused him of betraying his Penan people.

And Torstein Sjotveit’s preference for broad-brush press statements, blogging and self-promoting PR stunts hardly matches up to the forensic fact-based studies that are now emanating from world universities and finding his grand and expensive projects to be lacking in substance.

The fact that the Norwegian does not plan to stay beyond the end of the year to see his projects through, as once promised, hardly increases confidence in his flimsily presented arguments.

Sarawak has failed to produce properly conducted and objective impact assessments on the swathe of mega-dams projected by SEB and it has broken international protocols by proceeding with its plans none the less.

Sjotveit stands indicted against his own benchmark criteria set down by the International Hydropower Association, of which he is a board member.

The true incentives for SCORE are plain for all to see, in that the only people certain to benefit are Governor Taib and his cronies.

Huge sums of publicly funded borrowed money are being ploughed into Taib family companies, which have grabbed the lions share of all the SCORE enterprises.

Whether or not these projects benefit the public, SCORE is bringing in billions for Sarawak’s own tinpot dictator, who is after all its biggest proponent.

Meanwhile, Taib’s true legacy to Sarawak has been again highlighted by NASA in a new report showing that deforestation in Malaysia rose by 150% over the last year alone, as the old dictator and his cronies seek to clear out what wood remains in the once fair and fabled state of Sarawak.