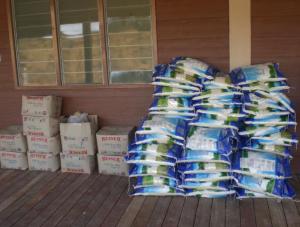 You would have thought that if there was one thing that SEB’s Torstein Sjotveit and his Tasmanian side-kick Nick Wright (Head of CSR and Resettlement) would have both made sure of, it would be that the Penan communities, who were barged off their lands by the Murum Dam, would have nothing much to complain about.

After all, we have had to put up with these two over-paid westerners praising themselves to the heavens about how their destructive dam building was all about making life better for the affected natives and how the warnings of ‘ignorant’ NGOs across the world were just so much nonsense.

Sjotveit even went further and accused concerned environmentalists of ‘making a noise’ just to raise funds to pay themselves with.

What cheek from a Norwegian with a million dollar salary, who has brought in a swathe of his own friends and compatriots into yet more overpaid jobs in the Sarawak state company! 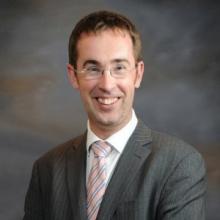 Mr Wright the SEB Vice President in charge of ‘Resettlement’ and Corporate and Social Responsibility and Communications!

Sure enough, in the last few days we have seen condemnation from Malaysia’s own official human rights commissioner over the plight of the resettled Penan and we have seen the local assemblyman forced to scramble to head off angry police reports by the natives against SEB for cheating them of even enough to eat.

Mr Wright turned out to be Mr Wrong

The Penan communities comprise just a few hundred families: SEB has raised billions of ringgit in public borrowings to pay for its dam building activities.

The ‘compensation’ settlement forced on these communities, in exchange for the rape of their immensely valuable forest heritage, was a paltry RM800 a month per family per month (below even the Sarawak minimum wage).

It should not have been hard to live up to the miserable commitment to at least feed these communities.  SEB had committed to allow each family a derisory RM250 in cash and to provide food provisions worth RM650 (to make up the RM800).

And yet, almost year on, SEB has not even managed to deliver on this mean promise. 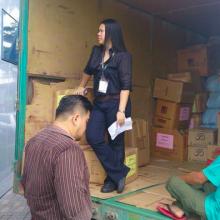 Shove them some boxes of dry stuff someone….. a food lorry being prepared for the Penan.

The Penan have been left hungry and stranded in their isolated communities, far from their remaining hunting grounds and with inadequate calories coming up the road from SEB.

As for the talk of adequate electricity, running water, proper schooling provision and all the other amenities of ‘modern living’ made by Sjotveit – forget it, there have been nothing but problems over these basic services, even though the dam took years to build – years during which these issues could have been worked out properly.

Nick Wright from Tasmania was being paid a fortune to get these things right, but he got them wrong.

So, was this Sarawak Energy and their boss Taib Mahmud’s game plan all along?

Is their whole purpose, in fact, to flush these remaining ‘primitive jungle creatures’ into the shanty areas of the urban coastal towns and to eventually merge then into their brave new ‘industrialised’ world?

Or, did they just want them dead?

The police report placed by the Penan was reported, to its credit, by the local press:

“four Penan leaders had recently lodged a police report against SEB, claiming that the power supply company had short-changed them in terms of the value of food items.

They claimed that there were times when the value of the food brought to them did not even come up to RM600, and thus asked their monthly allowance of RM850 to be fully paid in cash [Borneo Post]

In fact there have been numerous reports and complaints emanating from Metalung and Tegulang over the past weeks and months about inadequate supplies to the villages. 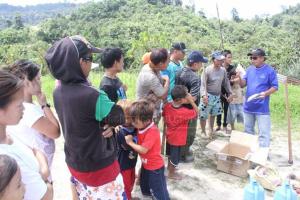 Our ‘lessons in food production’ – trumpeted PR by SEB……

The running water is not accessible, the electricity supply intermittent and only for a few hours each day and the appalling road access into these isolated settlements has made getting to school (a distance away) and all other forms of travel extremely difficult…. for those few people who do have access to transport.  You don’t get far on RM250 a month!

Yet SEB have done nothing.

The situation has been allowed to drift until, at last, the Penan put in their police report and the local Assemblyman Liwan Lagang was been forced to take some action to attempt to mollify the community by taking the food supplies out of SEB’s hands.

How have Sjotveit and Wright managed to sleep in their beds at night knowing how these communities were being short-changed and going hungry? 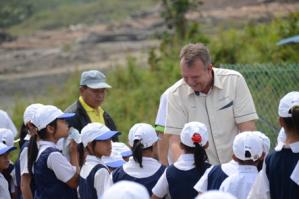 What if it had been their own wives and children stranded in the middle of nowhere waiting for tardy vehicles to arrive with rice and oil?

How would they like to think of their families being plucked from the lives they knew and put into a barren place, cut off from the world, with one bad road and no vehicle to get out anyway?

There have been so many excuses, you can take your pick, for the problems that have built up in the Penan resettlement areas.

But, all of these problems were utterly predictable and the basic issue was that SEB did not put anything like enough of the money being thrown at its hydro-electric projects towards ensuring the well-being of the people they are pretending to benefit.

The hypocrisy has been laid bare.

And, as the BN government set about building yet more dams in exactly the same manner as Bakun and Murum (build first, produce the impact assessments afterwards) it cannot be surprised at the growing resistance of the native communities, who have not one reason to trust their motives.