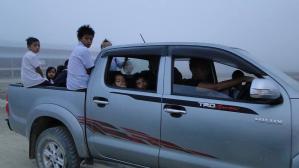 Sarawak Energy (SEB) has been pouring out self-congratulatory propaganda for weeks, praising its own ‘generosity’ and ‘kindness’ towards the Penan people, who were thrust from their homelands and forced into resettlements by the Murum Dam.

So just take a look at this – SEB’s transport provision for children aged 7-12 years old for their daily half hour journey to the nearest school building to their forced settlement!

Today, the independent radio station Radio Free Sarawak aired exclusive interviews with local parents dismayed by the danger facing their young children as they take off on the back of this open truck each day.

Their report revealed how on some days around 30 children, plus some parents are crammed into two dangerous vehicles, standing unsecured as it skids and weaves down unmade logging tracks towards the abandoned SEB construction office that currently serves as a makeshift school for the community.

The journey takes at least half an hour each way. 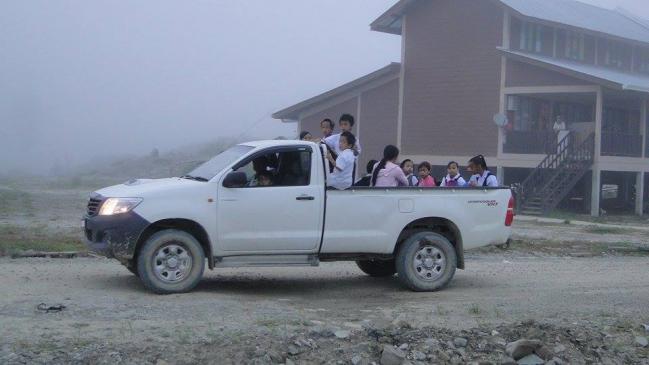 When the rain comes and the logging road gets wet the journey becomes exceedingly treacherous (as well as leaving the children exposed of course).  One nine year old boy has already fallen off the back of this vehicle and badly cut his forehead.

Because there is no clinic or medical support within two hours of this settlement of one thousand people, this wound went untreated, as usual, Sarawak Report has been told:

“I am so worried about those kids, it is dangerous when they use the logging road to school. Especially when it is a rainy day”, one uncle, Murum Senang Kalang, told RFS.

“Those kids have to squeeze together at the back of four-wheel car; they still young and do not know about safety.”

In his homeland of Norway, which sets the standard that Mr Sjotveit frequently harps on about when he preaches the benefits of hydro-power to Sarawak, every school child is by law carefully strapped into an appropriate vehicle to take them to school. 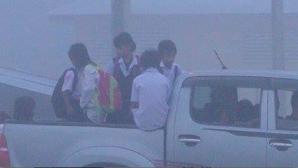 Seat belts and a proper individual safe seat (inside) are rightly expected, in a school bus with a trained driver.

Yet these vehicles, provided as part of the settlement commitment by SEB, are plainly not designed for the task in hand.

Rather, one is the private vehicle of a certain Labang Paneh, who just happens to be the Chairman of the Penan Committee elected to negotiate with SEB over their conditions and provisions.

And the other vehicle belongs to the Headman of Long Watt, a key decision-maker for the Penan community, who were reluctantly forced to give up their blockade and move to the new settlement after the waters rose on their lands.

It is plain, therefore, that instead of taking care to arrange appropriate school transport for the children of the settlement, SEB have gone no further than agreeing to strike a deal with these two useful intermediaries, paying each of them  a whacking RM4,000 a month to lend their own personal cars to transport all the children to school!

A conflict of interest? Clearly yes, and one that is highly useful to SEB, who seem to prefer to use their funds to corrupt local representatives, rather than securing the safety and well-being of the children of the community. 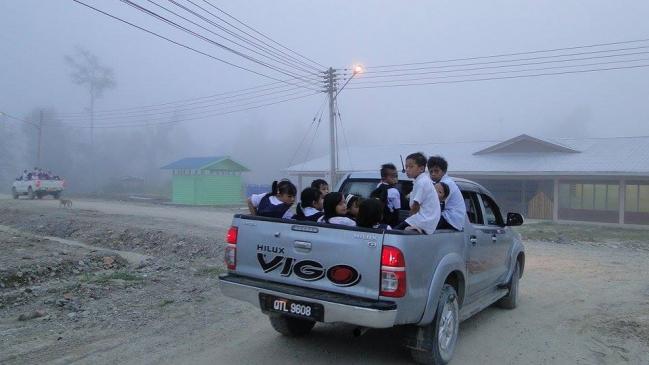 For RM8,000 a month a proper school bus could surely be hired for this job? And what about the drivers of these poor substitutes?

Well, it turns out that various members of the community kindly take their turn at the wheel, depending on who is around and wants to pick up some cash as well.

None of them hold a driving licence, of course, let alone have undergone training in carrying large numbers of young children, making the whole enterprise doubly dangerous.

As for insurance if a likely accident took place – has SEB checked the details on this minor matter?

“This way SEB says it is ‘giving business to the local community”.  But, it is just like at Sungai Asap, only those who have land and power are given the opportunities to do business and things like that.  The other people are left with no opportunities – this way the communities are controlled through the leaders by the government and SEB”

So, now we know the way things are done by SEB under the rigorous guidance of their Norwegian boss, leading the country towards progress and development! 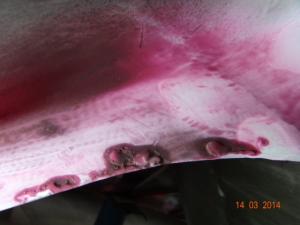 The outrageous treatment of these children, transported worse than animals in this way, reflects the reality of SEB’s relentless propaganda drive.

Sjotveit has driven his energies into story after story in the newspapers and online, boasting about SEB’s wonderful ‘achievements’, whilst brushing aside the shocking and scandalous discovery that he has for months been hiding the fact that he has installed turbines in Murum, which an expert report described as “not suitable for installation or operation”!

The truth is that the Murum Dam, which has brought so much misery to the local people, is not even properly built to work.

Yet, days after the outrageous discovery, here is Sjotveit in the Borneo Post, showing himself a hero of progress and personally issuing SEB’s own ‘literacy certificates’ to Penan settlers, as if they had actually been taught to read and write in a matter of weeks – or as if the certificates were genuine qualifications that might get them employment in the middle of nowhere at Tegulang: 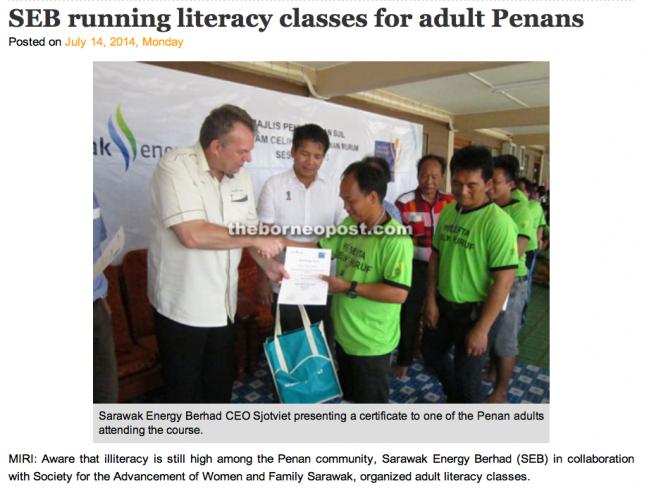 Look! I taught them to read and write and then gave them a certificate I dreamed up!

The paper reports, of course, how a native spokesman was dragged out once again to show how ‘grateful’ and ‘thankful’ the Penan are to SEB and its kindly owner, the State of Sarawak:

Alex Lenggok, one of the facilitators, disclosed they are very grateful and thankful to Sarawak Energy for this programme, as “at least we have the basics and able to read, speak and count”.

Although they are just basics, Alex believed it will bring a little change among them.

“I hope there will be more others will come forward and assist us to improve the quality and standard of our living. We also want to be like other communities who have gone far ahead,” he added.

So, now Torstein Sjotveit can boast to anyone who listens that he brought literacy to the Penan. Easy! 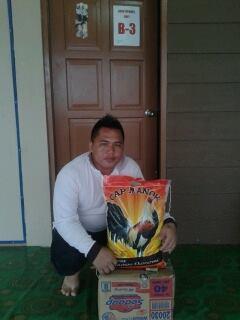 One month’s food supply for a family to the cost of RM600? A bag of rice and a box of noodles!

Others might ask why he did not build a proper school to be ready at their settlement when the Penan moved in?

After the years of construction at Murum, billions poured into the project, somehow a school for the displaced children got left off the list of priorities.

So, who can believe the claim all this is being done for the benefit of the native people of Sarawak?

And how come no clinic within two hours drive or proper transport to get to it, beyond hitching a logging lorry?

And how come SEB’s chosen contractors to bring food to the stranded community cut the agreed amount to one quarter of the needed supplies by the third month, leaving their leaders with no option but to go to the police to report they were being starved?

There is a further fiction being promoted, which is that the Penan, who were driven from their jungles which are now being ferociously by Taib’s top crony Shin Yang, are being ‘taught agriculture’ by SEB?

Once again, the papers have been fed pictures of classes and patronising stories about new horizons for these backward jungle folk: 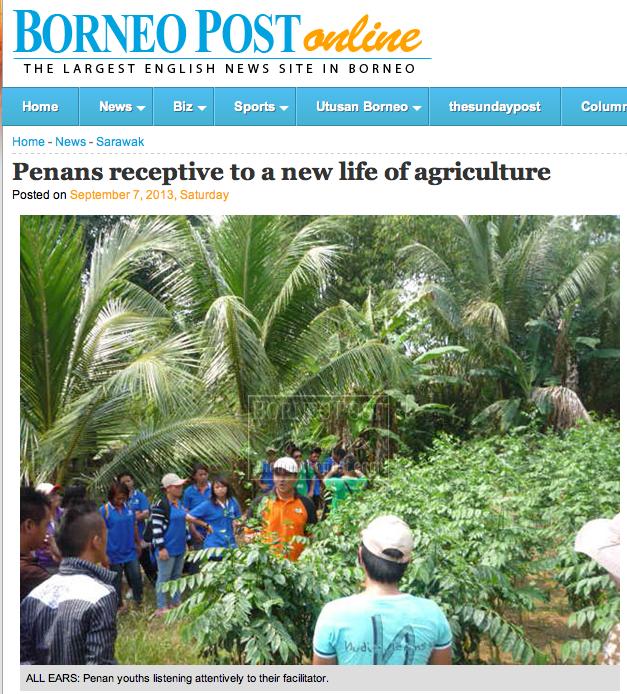 ‘receptive to agriculture’ – but they can’t do it back home!

Yet the truth is that the resettled Penan, who were promised land by SEB to embark on growing their own food, are not being allowed to grow anything! 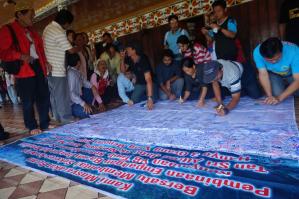 The reason being that the land they have been moved to belongs to another community, who are understandably taking the matter to court and have instructed the Penan that they have no rights in the area!

The area around the resettlements is the Native Customary Land and Temuda of the Long Lawan Kenyah community, who warned SEB four years ago that they had no right to hand it in compensation to the displaced Penan.

The Radio Station RFS interviewed the region’s head men over two years ago on the subject, after they took their protest all the way to Kuching and protested to the State Government.

Nevertheless, after this full warning, Torstein and SEB went ahead and moved the Penan, telling them there would be farm land at their disposal – in the same way that they have just installed dangerous and faulty turbines, even though they had tested as unsuitable for installation!

The Penan are now forced to live off dried foodstuffs and salted fish, with no fresh vegetables, meat or fruit, the foods that were once abundant in their primary jungles.

These are the realities, but Torstein Sjotveit has found out that it is far easier to say you have done things in a government controlled press than to actually do them.  So that’s what he does!

This week the community campaign group Save Rivers released its own findings from a weekend fact finding tour of Murum and Bakun by natives of Baram, who are next on the list for resettlement, so SEB can build a Baram Dam.

It was the campaigners’ answer to the lavish trips organised by SEB for Baram community leaders to see the Three Gorges Dam in China and speak to ‘ordinary Chinese citizens’, who were reported praising their ‘wonderful new life’ in resettled communities.

This is what the Penan spokesman had to say to the Baram visitors about their resettlement locally in Sarawak.  You will not read this in the Borneo Post, but the full press release can be accessed on our Campaigns Page:

Believe Torstein Sjotveit and the Borneo Post if you want to – or take a look at how Penan school children are forced to go to school and the menu of the food they now have to live off each month: 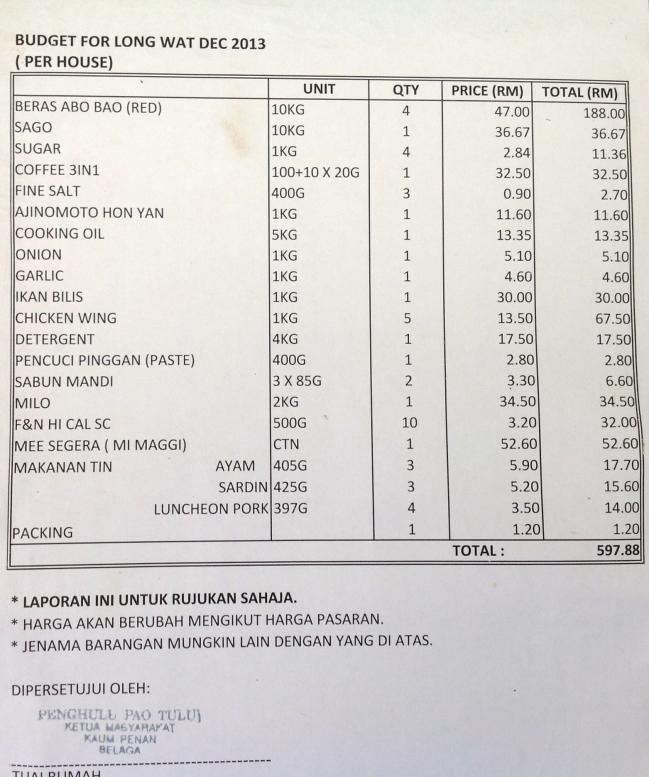 This is SEB’s full ‘luxury’ ration pack (still no fresh meat or vegetables) at RM 600 a month. Soon contractors had cut it back to rice and noodles worth just RM200 per family!