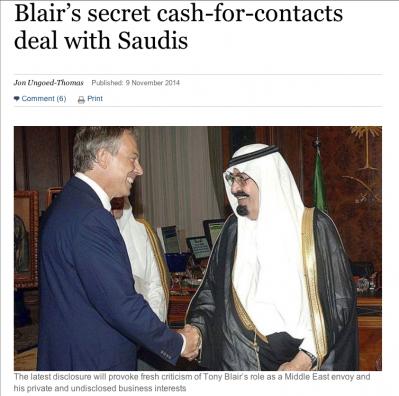 London’s Sunday Times newspaper has published a front page story revealing that the former UK Prime Minister Tony Blair was hired by PetroSaudi International for RM218,000 ($65,000) a month, plus a 2% ‘success fee’ on transactions.

The controversial company was itself funded by a billion plus dollar loan from the Malaysian Development Fund 1MDB and has provided no other evidence of substantial income for that period.

It works out at an annual ‘retainer’ of over RM2.6million for the ex- British PM, all apparently funded by Malaysian development money.

There has been considerable criticism that Blair has been combining his role as a Middle East negotiator with involvement in private oil deals.

Sarawak Report can confirm that the contract between Tony Blair Associates and PetroSaudi International (both based in London) was negotiated in 2010, not long after the shadowy oil exploration company had received a total of US$1.7billion dollars from Malaysia’s supposed ‘development fund’ 1MDB.

However, the company told the Sunday Times that the arrangement in fact ended after a few months.

A full copy of the terms of engagement with PetroSaudi was apparently leaked to the Sunday Times and the paper says it provides the first detailed insight into the former prime minister’s ‘cash-for-contacts’ business, run under the auspices of Tony Blair Associates, including the two companies involved in the deal Firerush and Windrush. 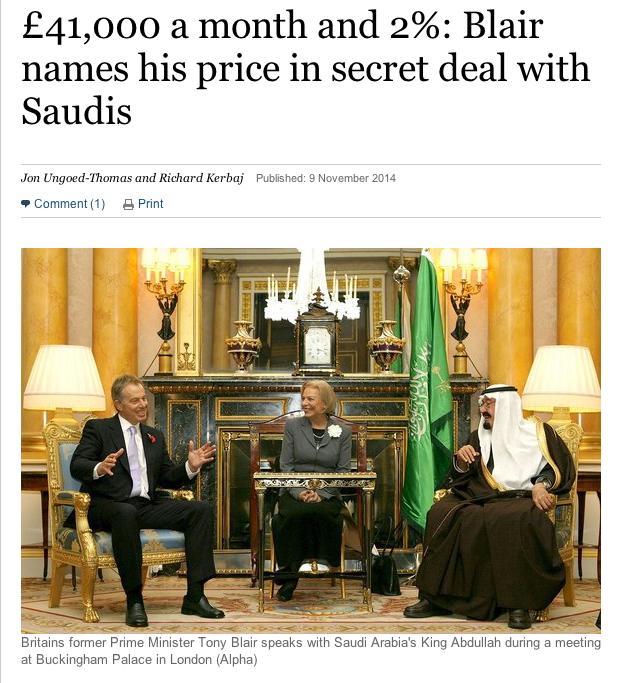 Potential to make vast sums from ‘Success Fees’ plus a juicy retainer of $65k per MONTH!

The contract, which has been released online, details what Tony Blair was engaged to do for the fledgeling outfit.

He committed to use his influence and contacts to scout for business and also for further investors in PetroSaudi, specifically in China and Asia.

Shockingly the terms of engagement also spell out the former PM’s demand that he should receive a “Success Fee” of 2% of the ‘transaction value’ of any business he succeeded in facilitating for the company, by means of an introduction or any other method. 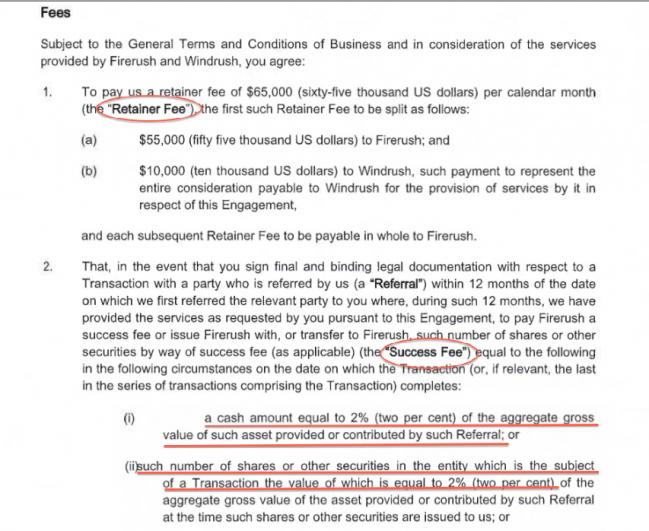 Given the vast sums that are transacted in the oil business, the profits from such an agreement were potentially enormous for the politician, who is still highly active as the appointed representative of the so-called Quartet of powers seeking to negotiate peace in the Middle East.

There is another obvious role for Blair in this deal. There can be no doubt he would have provided a useful advocate for this previously unheard of oil company, which was struggling to explain why Malaysia’s foreign wealth fund should have invested its entire budget into this single portfolio

Hidden connection with a Saudi Prince 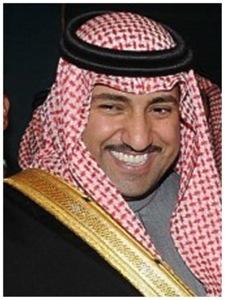 Prince Turki is the 7th son of the King of Saudi Arabia – why did he seek to conceal his involvement in PSI?

It is the PetroSaudi connections with Saudi Arabia that will nevertheless cause most embarrassment to the former PM, given that Blair is appointed by the United States, Russia, the European Union and the United Nations to represent them in the region.

It leaves him charged with a potential conflict of interest and making private business contacts out of his public role.

Indeed, while Malaysian authorities have attempted to present PetroSaudi as having an official status in Saudi Arabia, the company’s link to the powers-that-be are entirely personal.

PetroSaudi was set up by the son of the King of Saudi Arabia, Prince Turki bin Abdullah bin Adbulaziz, making the connection extremely sensitive.

Indeed, Sarawak Report has been able to establish that the company apparently went to considerable lengths to disguise the Prince Turki connection back in 2009/10.

This was in the aftermath of the billion dollar investment by 1MDB and at the time that Tony Blair was engaged to promote the company.

The apparent attempt to disassociate from the Prince Turki connection can be seen through the re-writing of the company’s websites.

Whereas in October 2009 the PSI website publicly acknowledged in its About Us section that PetroSaudi had been established in 2000 by Prince Turki and his friend Tarek Obaid, this narrative was later altered.

By December 2009 the company claimed to have been set up in 2000 by Tarek Obaid only.

And then by October 2010 and the conclusion of the deal with Tony Blair the company had altered its history again to claim it had been set up five years later in 2005 by Tarek Obaid. This remains the current claim.

Yet, despite the cover-up, Malaysian news outfits have continued to report the Prince Turki connection locally, in a clear attempt to impress Malays with PSI’s links and supposed status within the Saudi Kingdom. For example:

”During the recent crisis in Egypt, PetroSaudi chairman Prince Turki al-Saud leased two Boeing 747s to bring Malaysians back home from Saudi Arabia after their arrival from crisis-hit Egypt. This was done In the spirit of the special historic ties between Malaysia and Saudi Arabia.   PetroSaudi CEO Tarek E. Obaid said the gesture, made on behalf of the company and the Saudi royal family, demonstrated PetroSaudi’s continued commitment to Malaysia. The prince is a son of King Abdullah of Saudi Arabia.   The oil exploration and production company, owned by the Saudi royal family, is involved in a RM8.7 billion joint venture with government-owned 1 Malaysia Development Bhd (1MDB), a vehicle for Middle East investments in Malaysia.” [Another Brick In the Wall – pro-BN blog in Malaysia, April 2012]

It seems that while a deal with the rich Saudi Arabian Royal Family was seen as desirable in Malaysia, the information was being suppressed elsewhere, given it was an inconvenient connection, for example, to Tony Blair.

“IN NOVEMBER 2010, Tony Blair flew into Beijing for a speech on globalisation. With the words of his faith foundation emblazoned behind him, he stressed that with so many opportunities to get rich there was an urgent need for “a sense of values, of principles, of things grounded in more than simply material advance”.

More than 5,000 miles away aides at his consultancy, Tony Blair Associates (TBA), based in Grosvenor Square, central London, were putting the finishing touches to a secret and lucrative business deal with an oil company founded by one of the most senior members of the Saudi royal family.”[Sunday Times article]

Who paid for Blair’s contract?

From Malaysia’s point of view the paramount concern remains the overwhelming evidence that the money used to pay Tony Blair had in fact been borrowed by their own government, supposedly to fund development projects within Malaysia.

Observers had been voicing loud concerns well before 2010 that PetroSaudi had no track record or apparent funds before a massive injection of 1MDB money in September 2009.

The ‘Malaysian-Saudi Arabian Joint Venture’ was presented by the Prime Minister as being 60% funded by PetroSaudi International (PSI) to the tune of $1.5billion. But, it soon turned out only to have received cash from 1MDB.

It was later ‘explained’ that PSI had contributed an alleged oil venture in the Caspian Sea as its share instead – but this concession has yet to be clearly identified.

Even when 1MDB had responded to criticism in 2010 by exiting the joint venture and ‘selling out its share’ to PSI, it soon turned out that in fact the Malaysian fund had lent the money to PSI to buy it out.

During 2011 further money was lent to PSI by 1MDB.

So, the clear conclusion is that PSI had little operating income before the injection of funds by 1MDB and therefore Tony Blair’s fancy salary was thanks to Malaysian money, which was being secretly spent on foreign speculative ventures, rather than local development.

From zero activity to a ‘multi-national player’?

Indeed records for PSI in Switzerland for 2009 indicate the company only had 100,000 Swiss Fancs in the coffers of its international business, less than the cost of a month’s retainer for the British politician just a year later. 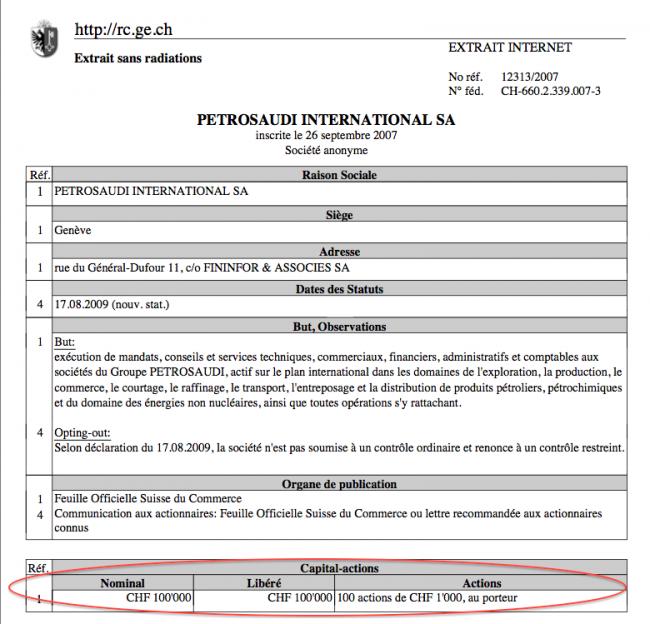 Meanwhile, the UK arm for PetroSaudi International  turns out only to have been registered as a company in February 2009.

Company records for that year indicate an unexciting balance sheet for what was supposedly a multi-national, billion dollar operation due to invest in Malaysian development just a few weeks later: 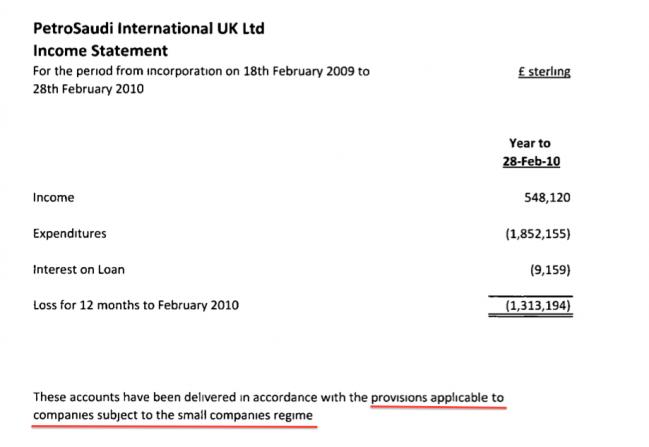 It begs the question, why did 1MDB choose to put all its $1.7billion original loan into such a company just six months later?

The public may not have known much about the company, but the PM Najib Razak, who ultimately controls 1MDB as Finance Minister and the Chair of its Advisory Board most certainly did.

Yet, at the time of the loan in September 2009, the Malaysian PM and 1MDB were making repeated claims about the company, which were plainly misleading, encouraging journalists to describe PetroSaudi as a Saudi “state owned company” or at least one that had official backing from the government of Saudi Arabia. 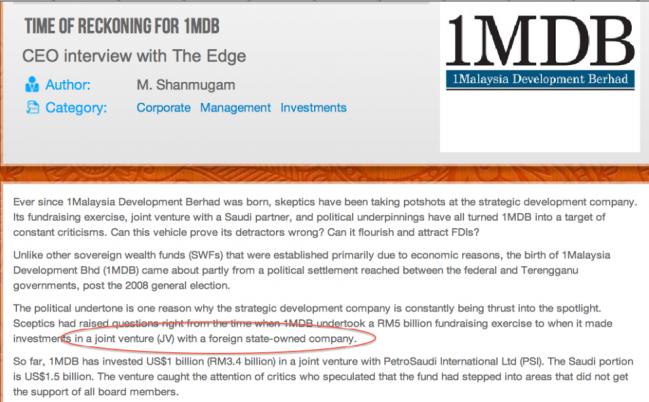 In fact PetroSaudi has no backing or official status.  It is merely a private company, owned by a Saudi Prince – one of a number with similar websites and zero track history at that time.

This did not prevent the Prime Minister of Malaysia, Najib Razak, seeking to imply at every opportunity that the Joint Venture represented some sort of inter-state cooperation agreement between the two countries.

An official 1MDB press release on 30th Sept 2009 admitted PetroSaudi International (PSI) was a private company but went on to claim that it was “mandated” by the state of Saudi Arabia to “carry out investments that can strengthen the relationships between the Kingdom of Saudi Arabia and key countries worldwide”.

PSI has no official status whatsoever to carry out investments for Saudi Arabia. 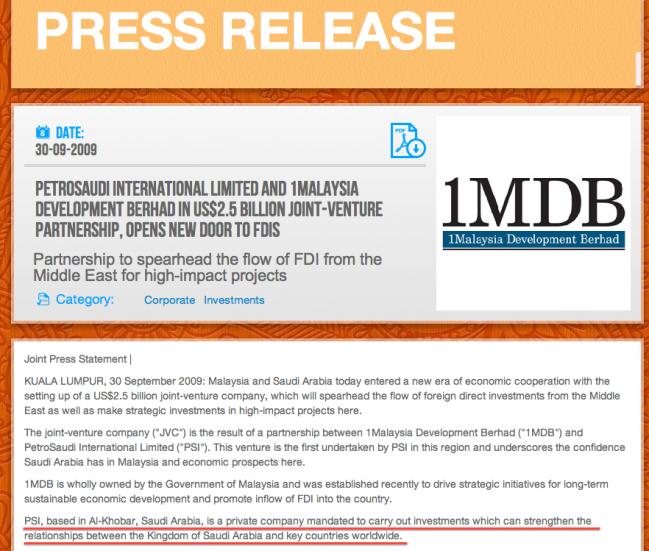 Najib went on the record even more misleadingly, alleging that PSI was cash funding 60% of a Joint Venture of $2.5billion.

At the time of the launch of the joint venture he spelt out that Malaysia was investing $1billion and PetroSaudi $1.5billion and implied that the deal was an official joint venture between the two countries. 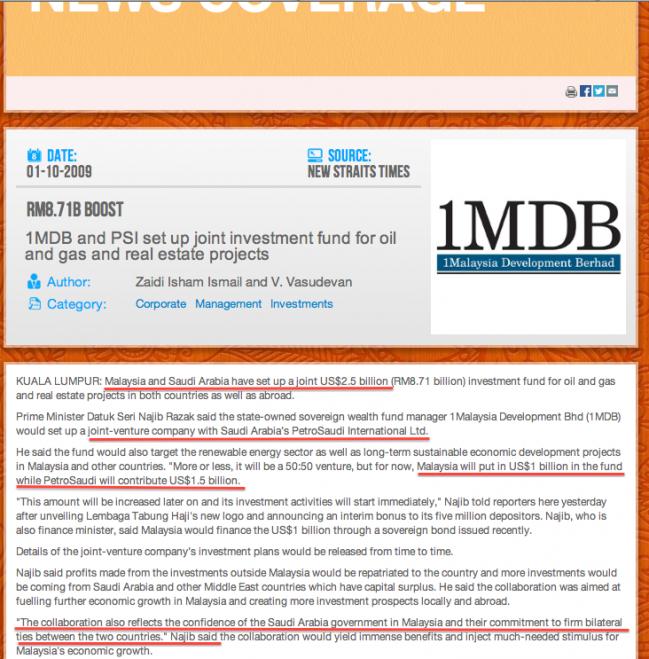 “The collaboration reflects the confidence of Saudi Arabia in Malaysia”

Despite the fact that PSI has no official Saudi connection, Najib was prepared to boast nonsensically: 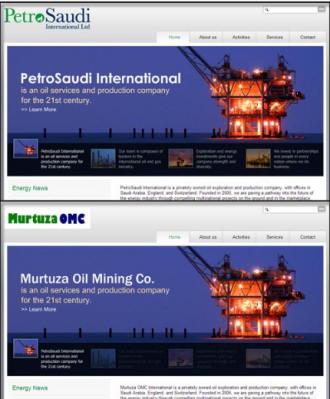 Najib has subsequently visited Saudi Arabia with great fanfare and much talk of bilateral investment relations and the ploughing of Middle Eastern money into Malaysian development.

Yet, the only money invested in the PetroSaudi joint venture were billions borrowed on the Malaysian taxpayer and none of that money was used for investment in local development.

There has been one clear beneficiary from this mysterious venture, of course.

While Malaysia seems to have gained nothing from the deal, PetroSaudi International appears to have burgeoned into a cash rich enterprise with various investments in Venezuela and Africa.

It was able also to hire the likes of Tony Blair to boost its credibility and business opportunities, – all for a mere RM218,000 ringgit a month!