Ramesh Rao Also Bankrupt - SO WHO IS PAYING LESTER? 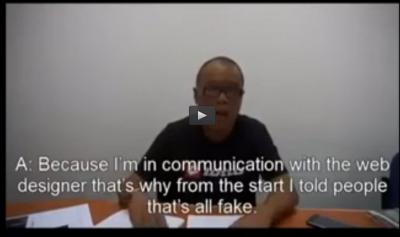 The only fake is Lester!

Earlier today, the head of the ‘NGO’ behind the explosive and extraordinary allegations about an international fraud designed to topple the Prime Minister went on a new attack.

Ramesh Rao. who is president of a previously little known entity, Pertubuhan Minda and Sosial Prihatin issued a series of condemnations against those who criticised bankrupts in a Twitter outburst, reported in the press.

He was defending his ‘star witness’, the bankrupt ex-journalist Lester Melanyi, who has been the source of all his allegations and who has admitted to being paid to produce his stories.

Ramesh lambasted the opposition parties (whom Lester also implicated in these ‘forgery’ allegations) for questioning Lester’s integrity on this and several other grounds and advised that no bankrupt should vote for DAP or PKR.

He then, as journalists noted, tweeted something rather revealing:

“”If I received money from BN to do work, I would have been free from bankrupt status a long time ago. Why do you care DAP and PKR,” he said.[Malaysiakini]

A check into Mr Rao’s status has now been passed to Sarawak Report and it confirms what the gentleman has himself implied.  He too is bankrupt! 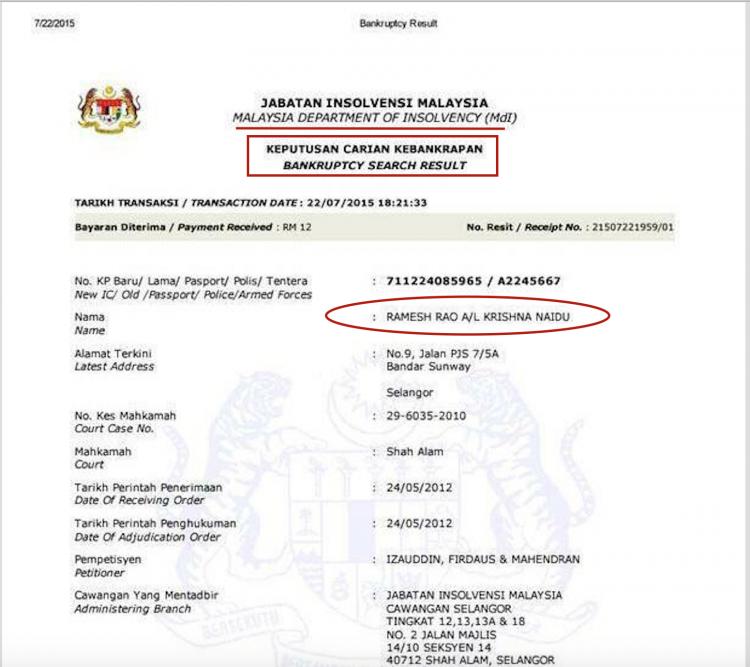 Rao is bankrupt, so who is funding this shabang?

So who is paying?

Sarawak Report sympathises with Mr Rao’s feelings about being bankrupt, although we sympathise more with the people who lent money and did not receive it back owing to his apparent fecklessness.

However, in the context of his activities – flying Lester to and fro; putting Lester up in hotels; hiring hotels for press conferences; commissioning videos to be made and indeed paying Lester…. we ask how Ramesh is funding all this?

Should he not be paying back his creditors first?

He says that if he was being paid by UMNO then he would no longer be a bankrupt.

He may think we are jolly mean to suggest this, but since it is on every sensible, thinking person’s mind we will.

Could it not be that both he and Mr Melanyi are no more than a pair of desperate bankrupts, who are willing to say and do anything in order to get back into solvency once more?

Maybe if they can bring one solid, credible and not disproven fact to back up what so far has consisted of mere verbal allegations by the slurred and confused Mr Melanyi this question could be dispelled.