Malaysian Democracy Goes Up In Flames 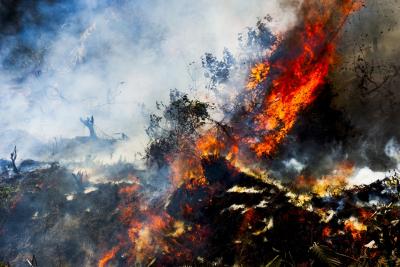 Najib Razak claims that the draconian ‘security’ bill, which he is rushing through Parliament over the next three days, is based on provisions brought in by the UK to counter bombing attacks against civilians.

Liberal forces may be up in arms in the Britain about what they describe as the dangerously wide powers granted by the UK anti-terror acts, but these are nothing compared to the sweeping provisions currently being rushed through in Malaysia, which allow the PM to introduce martial law at the drop of a hat.

In particular, the UK terror laws are directed specifically against mainly foreign nationals suspected of planning random and murderous attacks against innocent civilians – attacks of a kind that are yet to take place in Malaysia.

From reformer to dictator via the bank

By contrast, the main provisions of Najib’s act are clearly directed against internal critics.

Indeed, whilst the British law allows for indefinite detention of foreign nationals believed to be fomenting acts of terror, the Malaysian law allows similar sweeping powers against anyone the Prime Minister regards as threatening his own political position in any way.  He is allowed to imprison under this act someone he regards as threatening the economy for example…. this includes criticising his own management of it in any way.

The licence for dictatorship that Najib is currently rushing through Malaysia’s pretend Parliament in just three days goes much much further even than all this however. It is a sign of just how little regard the elected representatives have for their responsibilities that they are allowing this final public removal of their authority in such a way. 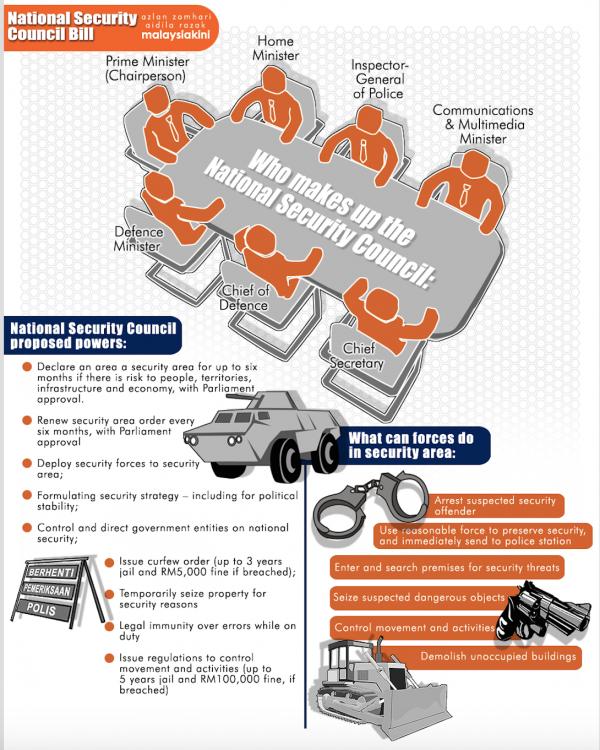 Far in excess of anything that has been brought through in the UK, Najib is effectively allowing himself a War Cabinet, his so-called National Security Council, to run the country as a straight dictatorship, by-passing all the previous checks and balances that define a democratic system.

And his Parliamentary bosses (which is what the MPs elected by the people are supposed to be) are letting him do it overnight and without the slightest justification whatsoever. 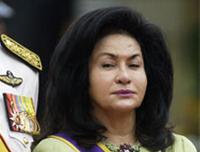 Of course, he is pretending that all these powers are just ‘provisional’ to counter a ‘possible emergency’ – but there is nothing to stop him assuming them when he likes for whatever reason he chooses in this legislation and given how desperately he is currently hanging on to power there is little doubt he will do so sooner rather than later.

The Prime Minister is grabbing all these powers on the pretext of an emergency that simply does not exist in Malaysia. There have been zero terror attacks and there is no war – and yet he has taken on more powers and authority through this bill than Winston Churchill adopted when the Nazis were heading for Britain’s beaches.

When Churchill launched his own War Cabinet against the Nazi invaders, for example, he specifically included opposition politicians in key positions in order to preserve the democratic principle and bring the people with him.

Yet, Najib’s War Cabinet, consists of a handful of his closest political cronies, along with an un-elected police officer, that very IGP who has been running amok in recent weeks attacking anyone who raises concern about corruption in high places. 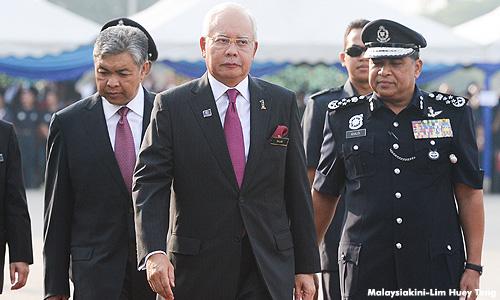 Running the country as they like from now on new DPM, PM and Police Chief

He is moreover granting this crony cabal arbitrary powers to run the country as they like and to arrest and detain who they like, without reference to any existing laws all in the name of fighting terror.  Most significantly, Najib is also granting his boys and himself total immunity from prosecution over any of their actions in advance, in case any ‘mistakes’ they might make in the heat of their battle against the “terror threat” facing Malaysia.

These ‘mistakes’ could under this definition most certainly include plundering the public purse further into their own bank accounts, perhaps under the ‘mistaken belief’ that this would increase their personal protection agains these bombers, criticisers, law enforcers and other such threatening figures allegedly ‘seeking to topple the Prime Minister’ of Malaysia.

This is Najib Razak’s bid for supreme and untrammelled powers of dictatorship over his country, all under the guise of protecting it from a terror threat that has so far not manifested itself within its borders.  And he is doing it because he can no longer rule by consent, since he has lost the confidence of his people and he is in trouble with the law.

Yet that corruption has entrenched so deep within his own UMNO party that it does not occur to his MPs that they are solemnly tasked with the duty of protecting the rights and freedoms of the people, who elected them and who pay for their very comfortable positions.  Not a single one of them has thought to stand up in their pretend Parliament and express the slightest concern that their role has finally been made redundant.

These bow-wows are instead interested only in how much Razak will be prepared to pay them this time to do what they are told.  And, as long as it is enough so that they can pack their bags and leave Malaysia to live somewhere a little more free and congenial (e.g. London) when things get too rowdy back home, this is all these ‘legislators’ clearly care about.

By bringing through this so-called anti-terror legislation Najib is formally abolishing democracy in Malaysia, just a few years after assuming office under the pledge of reforming its earlier erosions.

He does so in the face of opinion polls that quite rightly show him to be the most unpopular Prime Minister ever in the history of the country – 16%.  At least when Hitler abolished democracy in Germany he was popular when he did it!  Even so, the consequences are there for all to remember. 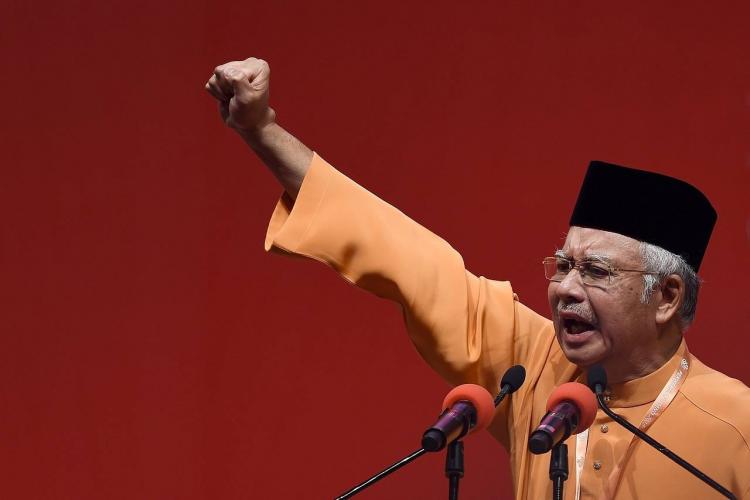 Heil Najib – he is now ‘protected’ against all legal action against him – self-granted immunity.

No one should believe a word of it when Najib and his cronies declare that these provisions will never be abused or used except to tackle terror offences. It was not believable when he brought in SOSMA and other oppressive Acts in 2012 and sure enough SOSMA and all those acts have been first and foremost used not to tackle terrorists but to suppress democratic critics of corruption.

Never mind, say the UMNO frogs, we can parachute out to London or New York.  Never mind say the opposition, we will win the next election hands down and then we can repair the country.

Najib knows how desperate his measures are and he has no intention of holding a next election.  His solution will be to claim a terrorist emergency to abolish all elections till future notice.

Parliament will in the course of this week grant him that power to do so and also to claim immunity for this act against his people.  There is one major terrorist at large in Malaysia who is single-handedly threatening the peaceful and democratic way of life of the people and that is the Prime Minister himself.

As for those UMNO pleasure seekers, Sarawak Report and many others will be waiting to name and shame them from London to New York.  Exile might not be so easy after all.