Directors Rated PetroSaudi Project As Being Worth "Zero"! 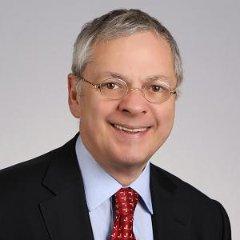 Banker Ed Morse was paid USD$100,000 to re-package PetroSaudi’s own information about the company’s worth. Except this time the Turkemenistan subsidiary was re-valued from “zero” to US$3 bn

A document linked to 1MDB’s PetroSaudi joint venture deal in 2009, shows that PetroSaudi’s own directors rated their supposed prime asset as being worth “zero”.

This so-called asset was the proposed ‘farm in’ arrangement that PetroSaudi was at that time negotiating to acquire over an oil field in Turkmenistan on the Caspian Sea.

The field is yet to be drilled and is in a disputed territory.  Neither was it ever actually owned by PetroSaudi, who were merely negotiating to invest in a share of the venture with the actual licence holders, a Canadian company called Buried Hill.

Nevertheless, the expert brought in by PetroSaudi to value the ‘asset’, American banker Ed Morse, reported just a few weeks later to 1MDB that the acquisition gave PetroSaudi a value of US$2.9 billion.

1MDB managers had accepted this valuation without conducting their own separate assessment of PetroSaudi’s worth before handing over a billion dollars of Malaysian public money to the alleged joint venture.

In the months since Sarawak Report first queried the value of PetroSaudi’s Turkmenistan arrangement, 1MDB and and the compnay have stood by their claims that there was nothing untoward about the valuation conducted by Ed Morse. 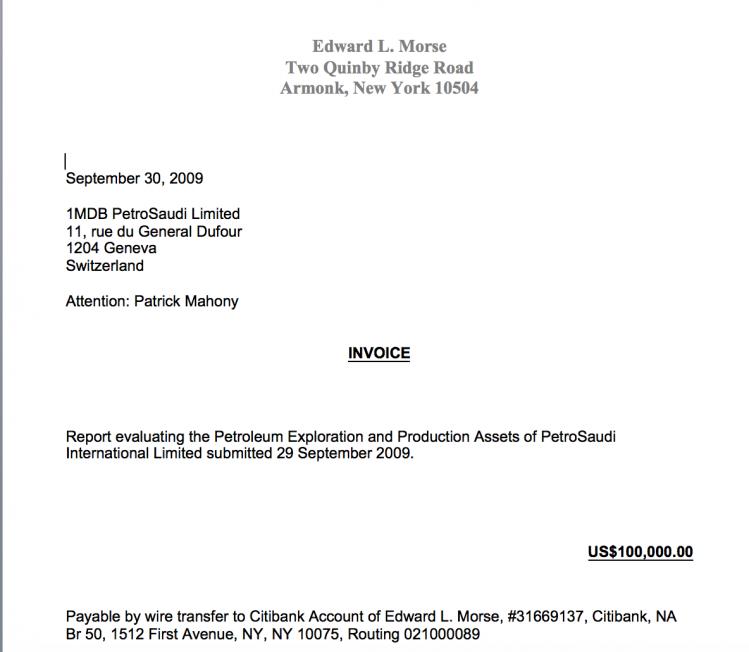 However, we have now acquired a further document from PetroSaudi’s own database which shows that company director Tarek Obaid himself had declared just a few weeks beforehand to a British company incorporation agent  in Jersey that the 2009 value of the subsidiary containing the ‘asset’ in Turkemenistan was initially “zero”.

In his submission on 125h June 2009 to FML, the incorporation agents he used to set up an off-shore company to hold PetroSaudi’s proposed interest in the venture (Petro Saudi Turkmenistan 1 Limited) Tarek Obaid acknowledged that the venture was presently worthless:

Currently worth zero – no income expected till 2015

The company would only be worth something if ‘farm in legal agreements’ were completed, the Directors say.  In fact, these legal agreements were never completed and the deal was called off about a week after 1MDB had paid over the billion dollars meant for the joint venture.

What’s more, the submission makes clear that even if the agreement had been signed there was to be no expected income from the venture until at least 2015 (six years hence at that time) and even then all the value they were hoping for was US$500 million – a sixth of the amount calculated a few weeks later by Morse.

It means that Morse’s valuation is hard to explain, given his prominence and expertise:

What the application, which was also signed by the British Director of the company Patrick Mahony, further makes clear is that there was no question of PetroSaudi being the actual owner of the Turkmenistan field, as was implied in the valuation presented to 1MDB by Morse who had been hired not by 1MDB, but by PetroSaudi themselves.

This was merely an investment in someone else’s as yet un-started project and it was not expected to deliver a bean, according to Tarek and Patrick, until 2015. 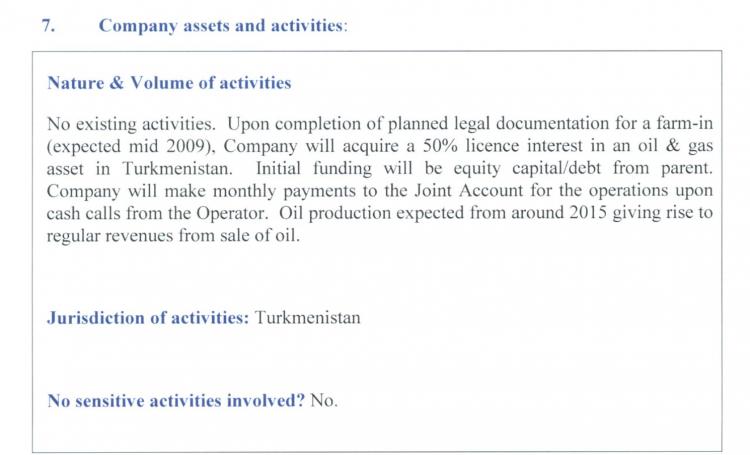 In June 2009 the company was worthless – and it remained worthless after the farm in arrangement was dismantled in early October.

And yet, just three months later Ed Morse was calculating the worth of this asset to be just shy of US$3 billion to PetroSaudi. Documents show that he based this calculation on documents that he had received from PetroSaudi themselves, which he had plainly not chosen to check or question.

To give Mr Morse his due, his letter of engagement specifically excluded him having to prove PetroSaudi’s legal title to the oil field – even so he had pledged to abide by industry standards when assessing the worth of the disputed oil field.

But, as the documentation shows, 1MDB’s then CEO Shahrol Halmi only signed that letter of engagement on 29th September, the very day that 1MDB was already sending the money over to the joint venture in ADVANCE of Morse’s valuation. 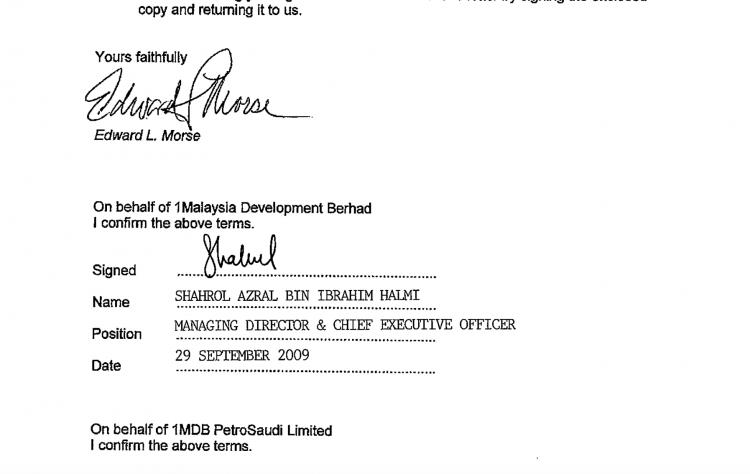 In fact, as emails also show, Morse was only contacted around 23rd of September less than a week before 1MDB transferred the billion dollars and that it was PetroSaudi who was providing him with all the materials for that post facto valuation: 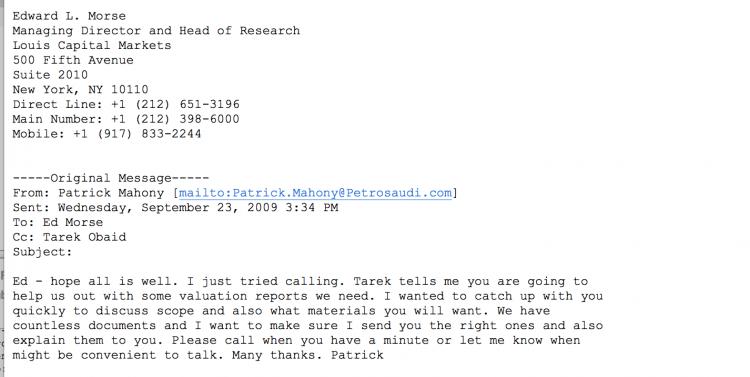 Window dressing – PetroSaudi scrambled to organise the bogus valuation of the company as an after-thought when the board demanded proper procedures.

As we have earlier documented, Morse only took a few days to pull together the valuation report and there is no evidence that he did any research to check out the true worth of PetroSaudi’s interest in the Serdar (Turkmenistan) oil field.

In fact it rather looks as if we was taking his steer from what Director Patrick Mahony was suggesting he needed the value to look like!  “We are looking for a mid-range of $2.5b” explained Mahony in a later email.  “OK got it!” responded Morse:

Less than a week after the money was sent from 1MDB PetroSaudi hastily pulled out of its commitment to engage in the farm in deal anyway, leaving 1MDB in possession of an empty shell of a company worth “zero”, in return for its ‘investment’ of a billion dollars. 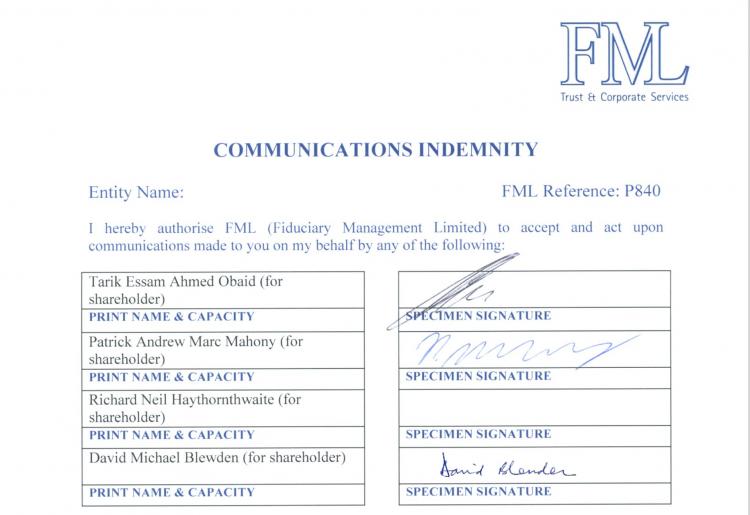 Signed up to the zero valuation

To read the exact nature of PetroSaudi’s Turkmenistan arrangement as put in their own words by the Directors of the company when they set up their offshore subsidiary Petro Saudi Turkmenistan 1 Limited Click HERE.

Would 1MDB have invested a billion in the venture if they had read this first? 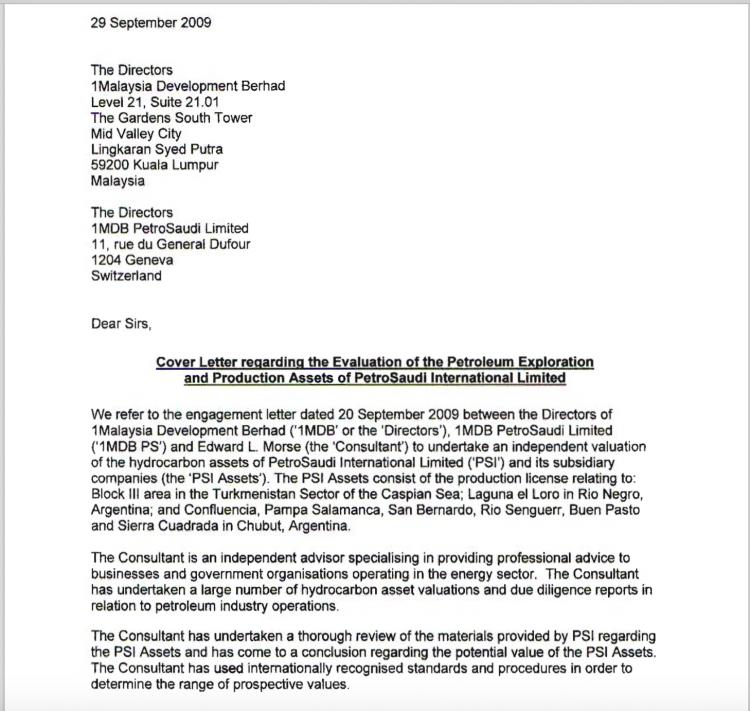 Ed Morse’s cover letter for the PetroSaudi valuation report claimed it was ‘independent’ and abided by industry standards, yet acknowledged it relied upon the company’s own information

Ed Morse put out his own disclaimer to cover any issues 1MDB might have.  The Board was clearly less than impressed as within days they were demanding their money back and a proper independent valuation to be carried out 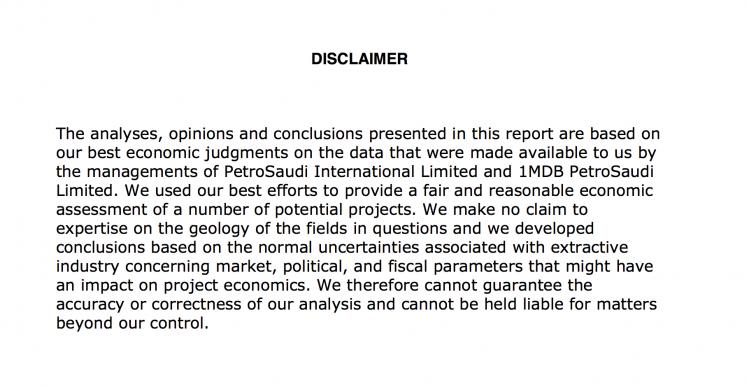 Morse covered by his disclaimer?