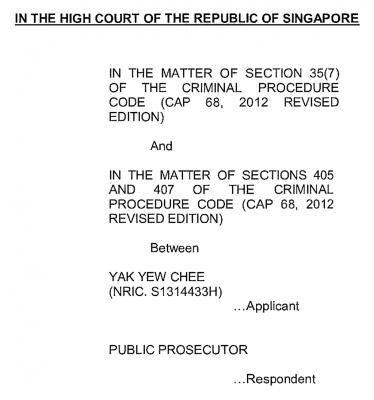 Given that both 1MDB and Jho Low have continued to publicly insist that the businessman played no role at the development fund whatsoever, after it changed its name from Terengganu Investment Authority in 2009, it is for them embarrassing that their mutual bank manager has declared otherwise in statements before the Singapore courts.

The affidavits and documents provided by Yak Yew Chee add to the mounds of evidence confirming that Low was, to the contrary. a linchpin in 1MDB’s various “investment” operations.

Moreover, they are particularly hard to deny.

After all, in a statement which Yak drew up in collaboration with his own BSI Bank bosses, Yak has acknowledged that he was the relationship manager for Jho Low and 1MDB Global and its subsidiary Brazen Sky, as well as what is believed to be the bogus Aabar Investments PJS Limited, based in the BVI.

The approved statement further describes Low, these companies and “their affiliates” as all being “closely linked” in “a matrix of relationships” – VERY different to Low’s denial that he had any continuing links with 1MDB:

“..relating to the accounts with BSI Group held by Brazen Sky Ltd, Jho Taek Low, 1Malaysia Development Berhad (1MDB, Aabar Investments PJSC (Aabar) and/or their respective affiliates … we would clarify that the additional parties named are closely linked in the matrix of business relationships involving 1MDB/Brazen and Low..” [Yak’s negotiated statement with his bosses at BSI]

Mr Yak has also been reported as managing accounts for none other than the mysterious and opaque former subsidiary of 1MDB called SRC International, which is headed up by Low’s close associate Nik Faisal Arif Kamil, now directly under Najib’s Ministry of Finance.

RM4 billion of public pension money from KWAP has disappeared into SRC and remains largely unaccounted for.

1MDB’s spokespeople therefore surely owe Malaysia their latest updated version of events, in order to accommodate this new information, which has so definitively nailed the lie that 1MDB and Jho Low had no relationship after 2009.

Yak cited another name besides Jho Low’s in his affidavits.

The bank manager makes clear, as a person under investigation himself, that he is aware that both his client Low and a certain Tan Kim Loong, better known as Eric Tan, are indeed being actively investigated by the Singapore authorities:

“I believe that the reason for this seizure [of Yak’s accounts by the Commercial Affairs Department] is due to the ongoing investigations into Jho Taek Low and Tan Kim Loong” stated Yak in paragraph 10 of his affidavit of 23rd November 2015.

So, who is this Eric Tan also being investigated in the Jho Low/ 1MDB affair in Singapore?

Sarawak Report can reveal key documents which show that Yak, Jho Low and Eric Tan were indeed involved in transactions together, with respect to a financial transaction that has already been reported in Singapore.

In April last year news leaked that a company named ACME Time Limited transferred US$20 million via Coutts Bank in Singapore to a Swiss Bank account belonging to none other than the PetroSaudi Director Tarek Obaid, partner in the original joint venture with 1MDB.

The transfer took place 30th September 2009, which was the day after that joint venture was signed. Our copy of the transfer document references Mr Yak (who was still in the last days of his previous job at Coutts Bank Singapore) and a colleague at the bank. 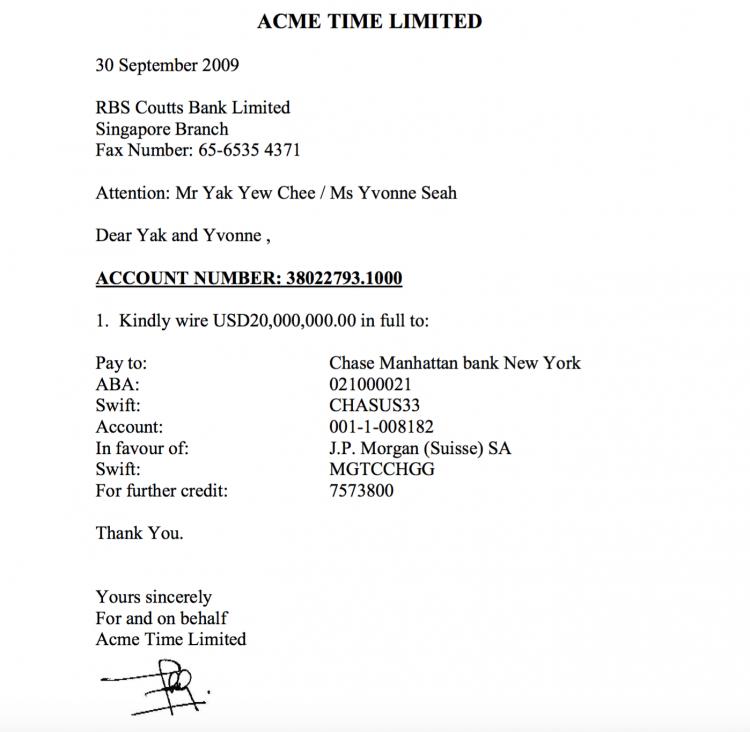 Sent from RBS Coutts to a JP Morgan Suisse account

There is no doubting that the payment was indeed being made to Tarek Obaid, because the bank account number at JP Morgan matches correspondence obtained by Sarawak Report from PetroSaudi’s own email server, thanks to whistleblower Xavier Justo: 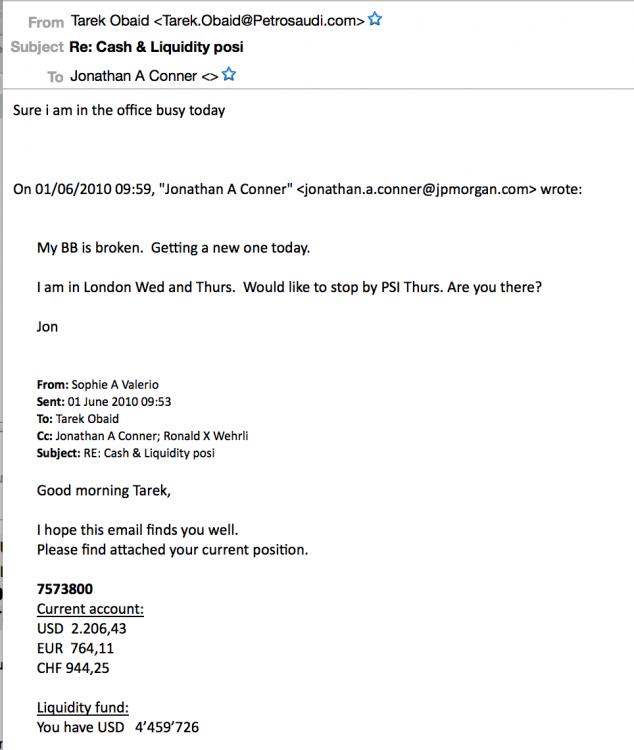 The involvement of Eric Tan, is clear from the fact that it was he who sent the above document both to Tarek Obaid and to his PetroSaudi fellow director Patrick Mahony, as part of an email trail identified by Sarawak Report.

The email trail was under the subject heading “Re: Wire Instructions to Sheikh Tareq Obaid”, under which Eric Tan (Kim Loong) sent his correspondents this and another document, which is clearly therefore related. 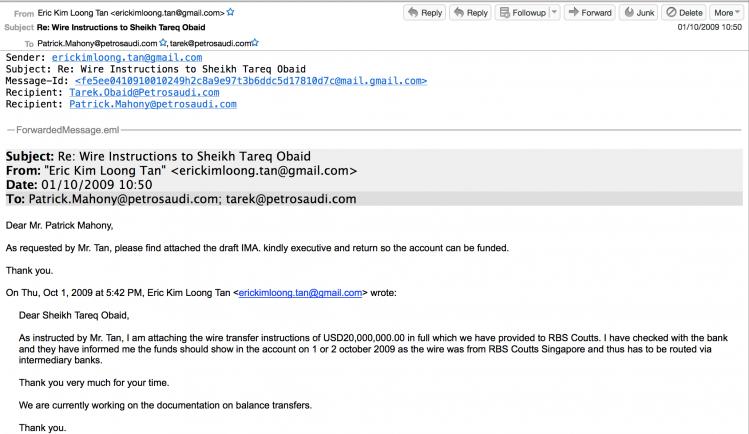 The second attached document was a so-called IMA [Investment Management Agreement], which Sarawak Report has earlier reported on.

This “IMA  agreement“, which appears to have been drawn up by Eric Tan and was also dated on 30th September 2009, turns out to be none other than that between Jho Low’s company Good Star Limited and Patrick Mahony, giving Mahony a 2% management fee to look after US$85 million on behalf of Good Star Limited.

So, there we have it, once again.  Jho Low, 1MDB and PetroSaudi all tied up in a “matrix” of activities, which are now under scrutiny by the Singapore authorities.

Was this an upfront payment to Mahony and Obaid, supposedly to “manage” the US$85 million ‘investment’, which Low sent on to Tarek Obaid shortly after?

If so, it was an interesting form of management by Mahony, who just a week afterwards, as we have documented, placed a further US$33 million into his own JP Morgan Swiss bank account and then put down over US£6 million on a posh new house in Notting Hill.

It seems Jho Low’s Good Star didn’t care about any of that.

After all, as all Malaysia knows, Jho Low’s Good Star had the day before, on 29th September, just banked (with the assistance of Yak Yew Chee’s own RBS Coutts bank) a whopping $700 million stolen from 1MDB, thanks to vital assistance from Mahony and Obaid, who had allowed their company PetroSaudi to “act as a front” for the deal. 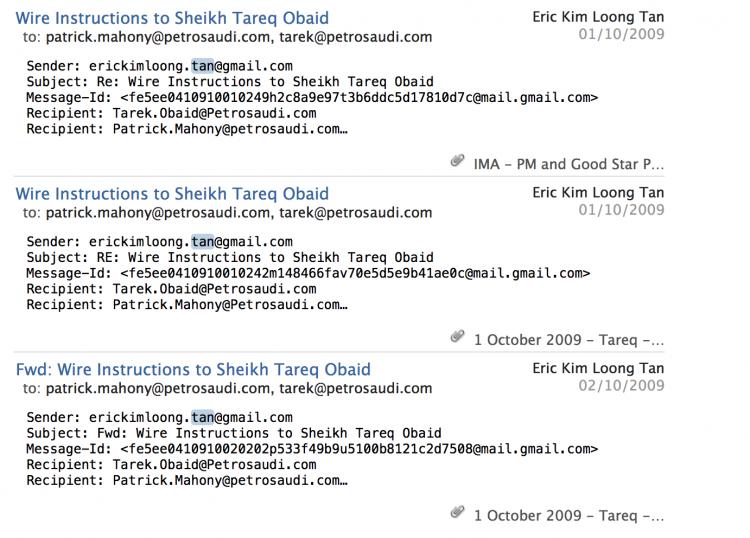