The high flying Swiss Asia boss of BSI Bank Singapore announced this morning that he had decided the time had come for him to retire.

The announcement came just hours after a local newspaper back in the bank’s home town of Lugano (the Italian speaking region of the confederation) had printed a full expose of BSI bank’s involvement with Jho Low, 1MDB and the money linked to the PetroSaudi joint venture deal in 2009.

BSI has just been bought up by another Swiss private banking concern, EFG, which was the same bank which bought out Falcon Bank’s business in Hong Kong in 2014, once again landing it into 1MDB’s extended financial mess.

The possible costs in terms of fines arising from BSI’s conduct over its Jho Low related bank accounts, which was an example of blatant high-value dealings with a politically exposed person, has interfered with the buy-out in recent weeks.

Moreover, a court case, which has been covered by Sarawak Report and other news outlets, involving the dismissal of Yak Yew Chee, who had managed Low’s accounts and those of 1MDB, Aabar PJS Limited and SRC, has thrown up documents which show how directly HansPeter Brunner had encouraged Yak’s activity.

Tim Leissner, summoned by the DOJ

HansPeter Brunner joins a growing line of bankers who have fallen from the very top of Asia’s banking league in connection with exposures relating to 1MDB.

This morning it was also revealed that Goldman Sach’s former Asia boss ‘Dr’ Tim Leissner has been subpoenaed by the US Department of Justice to give evidence on 1MDB.  He had also resigned last month.

ANZ’s seconded CEO at AmBank in KL also took an early out on his term of office last year for reasons not fully disclosed.  The major Australian bank was later fined by the Bank of Malaysia, for reasons that it has also, so far, failed to disclose.

It leaves the current AmBank CEO and CFO, Mandy Simpson, also on secondment from major shareholder ANZ, under considerable pressure to explain how the bank has presided over the flow of billions of dollars in and out of the account of the sitting Malaysian PM? 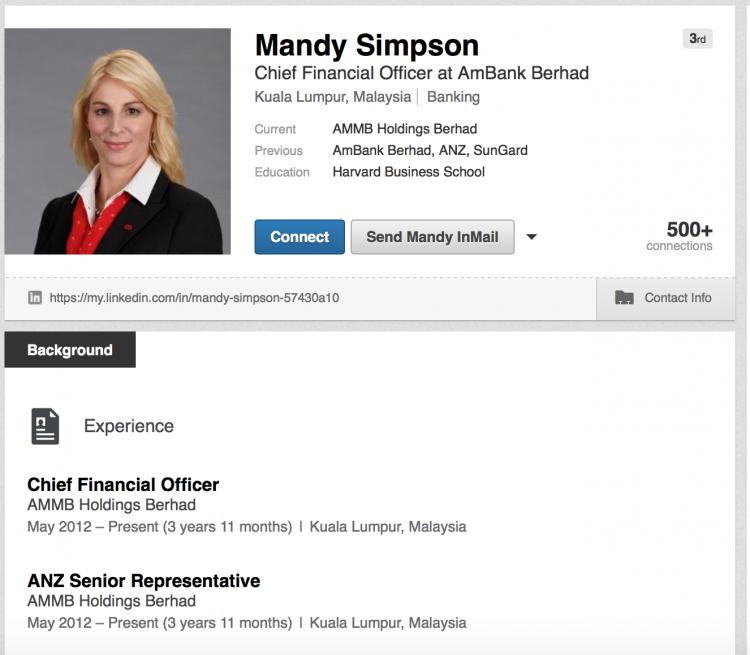 Mandy took over in May 2012 on secondment from ANZ… didn’t she notice the August transfer of US$620 million from the PM’s account to Singapore? She had been a senior figure at the bank since 2012 when the sums were being paid in.

Privee, has also stepped down, following Sarawak Report’s exposures of his personal involvement in managing over half a billion dollars which came into the account of another politically exposed person connected with 1MDB, the Abu Dabhi Aabar boss Khadem Al Qubasi.

As, Sarawak Report has already detailed HansPeter Brunner was particularly exposed because of his double involvement in the scandal, owing to his former position at Coutts Bank Singapore. 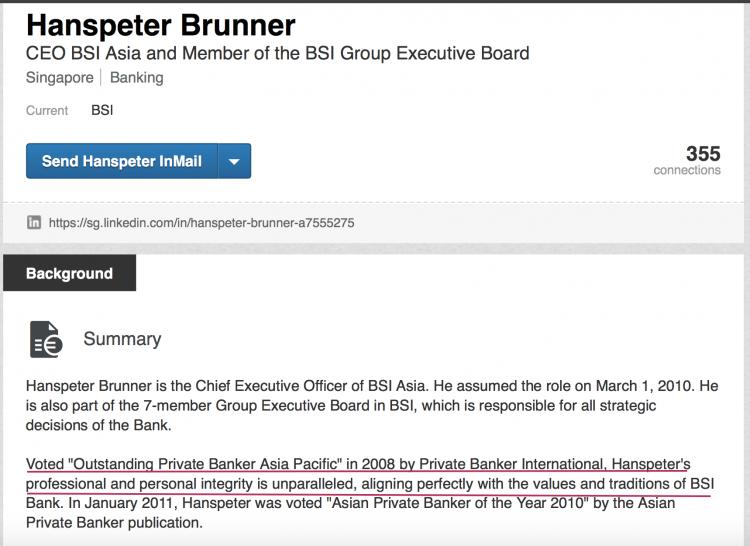 How Brunner described himself and his bank on Linked In

BSI had, in fact, according to the records available in the PetroSaudi database, originally rejected the planned transfer of US$700 million stolen from 1MDB in September 2009 into Jho Low’s own company Good Star Limited.

There were clear compliance issues troubling the BSI banking officials at that time and eventually Good Star opened its bank account at RBS Coutts in Zurich instead, despite clear compliance concerns by the staff of Coutts Zurich also.

Lawyers acting for PetroSaudi (from the London branch of White & Case) had declared in the related correspondence that this US$700 million payment was to satisfy a “loan” owed to the parent company, which 1MDB had unaccountably agreed to pay as part of the joint venture agreement.

Ahead of tomorrow’s funding and completion, please refer to the below points and the attached files.

(b) Account details for payment of 700,000,000 USD to an account in the name of PetroSaudi International Limited (Saudi)

However, incorporation documents seen by Sarawak Report show this was a lie.  The Coutts account number 11116073 above referred to an account belonging to Good Star Limited not PetroSaudi International Limited, as emails sent by 1MDB’s Sharhol Halmi at the same time made clear: 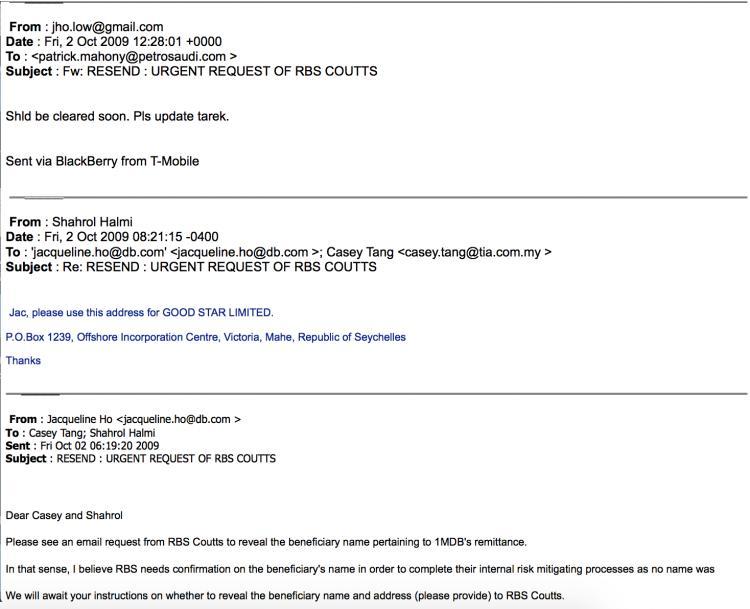 The Good Star Limited documents reveal that the company was incorporated just a few weeks earlier in the Seychelles with Jho Low as its only shareholder and director.

The same documents cite Coutts & Co Limited (Singapore Branch) as the named principle client of Good Star, implying that officials at the bank were involved in setting up the company and must have been aware that Jho Low was the beneficial owner of the company.

At that time HansPeter Brunner was the boss at Coutts Singapore.  However, the following month this Swiss banker pulled off one of the most stunning defections in banking history. He moved, along with around 70 of Coutts Singapore’s key staff over to BSI Singapore, taking with him star banker Yak Yew Chee, who was the manager for Jho Low’s accounts.

This move is still the subject of various legal actions between Brunner and the banks and head-hunting agencies.  Meanwhile, BSI in the ensuing period saw much of the money that had been deposited into Good Star’s Coutts account in Zurich being transferred across to Jho Low’s accounts at BSI – just under US$530 million, in fact.

Jho Low also opened several other multi-million dollar accounts of his own and of course 1MDB accounts, SRC accounts and Aabar PJS Limited accounts were also pushed through BSI, turning Yak into the firm’s star banker and winning HanPeter his accolade as Asia Private Banker in 2010.

Things look a little different in 2016 and Brunner’s compatriot and equally controversial colleague at Falcon Bank, Eduardo Leimann, must be wondering where this imbroglio is going to leave him and his own dealings with 1MDB and the vast transfers made by his bank into the Malaysian Prime Minister personal accounts in KL?