Jho Low's Latest Party Pals Are From The UN! 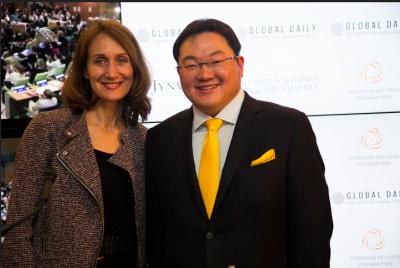 Jho Low is said not to be worried.  He has started moving round the Far East again, under the protection of well-paid political hosts and he has engaged all the best legal support, it is said, to fend off any moves to bring him to book on the sources of all that money.

He also has powerful and devoted new friends at the heart of the American establishment, namely at the UN!

Sarawak Report can confirm that the latest Jho Low birthday extravaganza, held in secret last November on board his billionaire super-yacht off Taiwan, was billed as a joint-fundraiser for the UN foundation, which has persisted in taking his money, despite repeated warnings from Sarawak Report over the past year. 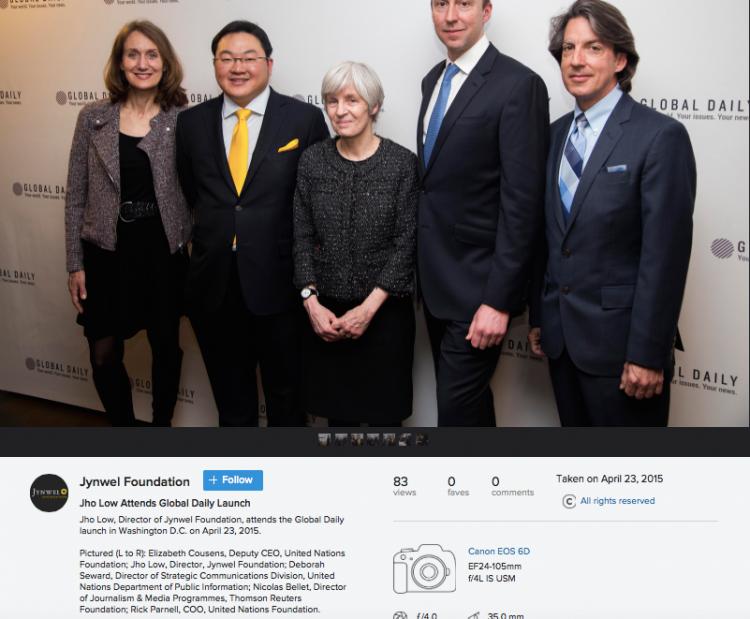 Top team at the UN Foundation and Global News, which Jho Low has funded to the tune of millions over the past year – plus programme partner at Thompson Reuters, Nicholas Bellet – as featured by Jho Low’s own PR platform

Around the time of the event, Sarawak Report had written an extensive email to the head of that foundation, copied to its editors at Global News and partners at Thompson Reuters, expressing our dismay that not only was the UN Foundation accepting money to fund its organ Global News Daily, but that it was using that outlet to promote Jho Low’s ‘charitable’ activities. 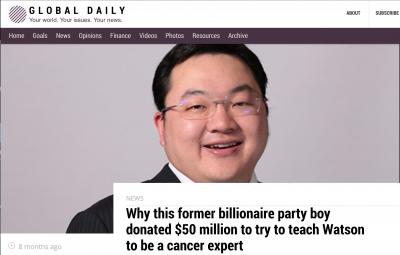 Worse, we complained that Global News had censored Sarawak Report’s protest on their Facebook page, when we posted a comment on their article praising Jho Low as a ‘party boy turned philanthropist’.  We queried why their outfit had not instead covered the real top story in Malaysia, also associated with Jho Low, which was 1MDB?

We had been shocked that the administrators at Global News removed our comment from their wall and yet retained their plug for the article promoting their funder Jho Low. 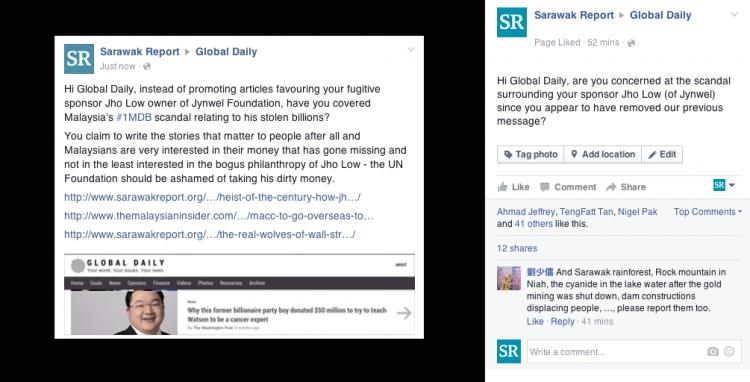 So, we sent a formal email protesting at this telling censorship and laying out our extensive concerns about Jho Low.  This was simply ignored by the UN Foundation boss Kathy Calvin and fellow executives.

Previously in May, the Foundation’s PR team had responded to our earlier warnings about Jho Low by seeking to justify Global New’s use of what ought to have been Malaysian development money on the basis they are promoting a “global conversation” about poverty “through increased levels of media reporting” and “training journalists”.

Their praise for their own plans was gushing:

Thank you for the information, which we have taken under advisement. The UN Foundation builds partnerships to improve lives, support the planet, and create a better future. To achieve this mission, we are proud to work with hundreds of thousands of supporters – including corporations, governments, nonprofits, and individuals around the world. The recently announced partnership with the Jynwel Foundation will help the UN Foundation contribute to what has been called “the biggest communications challenge and opportunity of our generation” – the urgent need to create an environment that will help the world achieve success on the most ambitious anti-poverty agenda in history. The new “global goals” – often referred to as the Sustainable Development Goals — will be the most comprehensive plan in history to fight poverty and create prosperity while protecting the planet. With the support of the Jynwel Foundation and other partners, the UN Foundation will be able to encourage a global discussion around the goals through increased level of media reporting, capacity building and training for journalists, media organizations, and spokespeople, and greater engagement and action around the global goals, to assure optimal chance for success on the goals by 2030. [press office UN Foundation May 2015]

What this series of excuses ignores, is that several, comparatively inexpensive independent news organisations, including Sarawak Report, have at the very same time been banned in Malaysia for struggling to cover the issues that actually matter to Malaysians, like corruption. 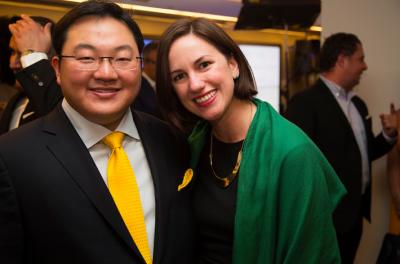 Despite this, the UN Foundation has remained willing to accept millions from this Malaysian political crony and proxy to the oppressive Prime Minister, in order to promote stories about his charitable activities, whilst notably failing to cover the corruption scandal, which made him rich.

Far from increasing media coverage and freedom, the UN Foundation are accepting money from a regime engaged in a media crackdown and playing a PR role for the self-same abusers of media freedom who are paying them.

Indeed the story of Jho Low’s ‘newsworthy’ philanthropy (a US$50 million donation to a cancer charity) which Global News and others originally ran last July, was merely a re-cycled much earlier story, which Malaysia’s banned Sarawak Report had long since covered the previous year.

What we had also revealed was the business connection that lay behind that apparent generosity, since Jho Low was at the time ingratiating himself in Texas, as part of his bid together with Khadem Al Qubaisi to use their separate sovereign wealth funds to buy Coastal Energy off the Texan billionaire Oscar Wyatt – and to cream a fat, illegal profit for themselves in the process – Jho Low was heading up a company intriguingly named SRG Global for his piece of the action… a name that will ring many bells in Malaysia!

None of this was mentioned in the UN Foundation piece a year later about the party boy billionaire made good, of course.  It was in fact a straight PR plug, presumably promoted to the press by Jho Low’s expensive agents at Edleman, who were also visibly present and posing at the UN Foundation launch of Global News in April of 2015 (well after the 1MDB scandal erupted). 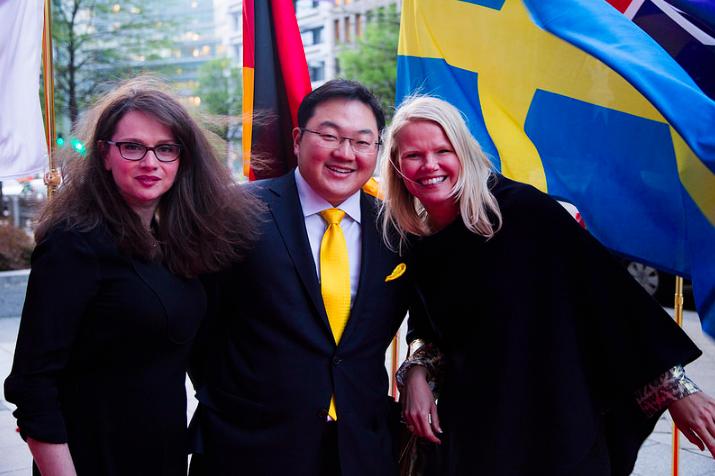 So much for the global conversation about poverty and training journalists on how to do their job!

The UN Foundation joins the party

In fact, it turns out, the UN Foundation, whilst reporting that the ‘former billionaire party boy’ Jho Low was reformed into a philanthropist, was at that very time getting ready to reap full benefit from the next multi-million dollar party extravaganza! 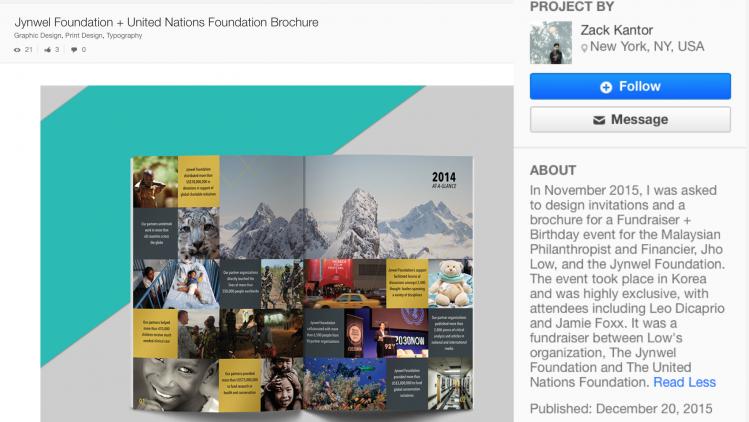 So the great birthday party was also a UN Foundation fundraiser!

Sarawak Report had learnt last autumn that Low was planning another of his hugely expensive and secret ‘VIP’ binge events for his November birthday, to be inauspiciously held on Friday 13th.

Low had even transported his eye-wateringly expensive mega-yacht Equanimity across the Arctic Circle, mooring off Busan Korea (a mere helicopter rider from his then location in extradition fortress Taiwan) in order to host the occasion.

Hollywood pals were flown over by private jet and subsequently tweeted excitedly about yet another monstrously expensive waste of what once was Malaysia’s public money.

Did the UN Foundation also participate in commissioning the brochure below [note – this link was rapidly removed after we published this story] linking the organisation with a blatant promotion of the Low family’s new found mega-wealth and philanthropic status? 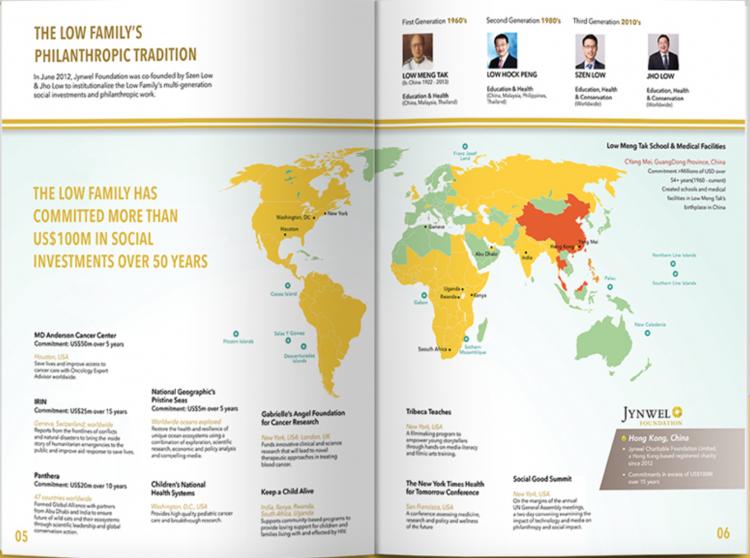 Given the claims of the graphic artist responsible and front cover of the booklet it would certainly seem so. 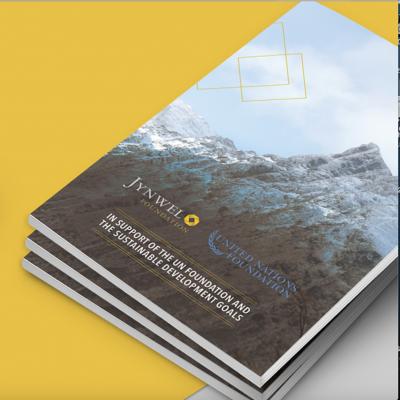 Full endorsement of the fugitive billionaire by UN Foundation?

The party off Busan on the US$600 million yacht was supposed to be a big secret, in order to protect Low, it would appear, from yet more pesky publicity about his wasteful spending of money that is currently the subject of major international investigations involving agencies across the world, including the Department of Justice in the UN’s home town of New York.

However, given the circumstances, if in the course of arranging this party fundraiser and its after events, any of Jho Low’s pals at the UN by any chance obtained information as to the general whereabouts of this fugitive outside of Taiwan, they ought let their local law enforcers know about it.  Agents from several jurisdictions, including their own, are known to be avidly looking for their moneybags supporter and it seems that the places they should be asking is in Hollywood and the UN. 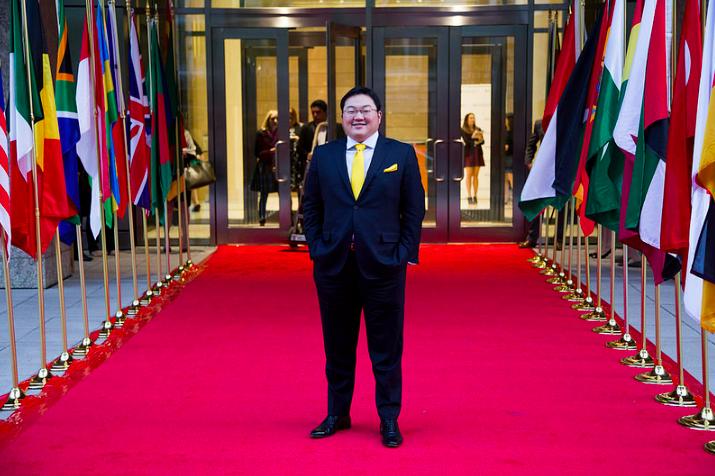 Posing outside the UN – but where is he now?

Incidentally, Mohammed Al Bawani, the owner of the company which supplied Low’s US$600 million super-yacht (currently in Cairns) has also bought up the company Protection Group International, which hired by PetroSaudi and Jho Low to accuse and defame Sarawak Report, alleging that we forged the documents surrounding the theft of 700 million dollars by Low’s company Good Star from 1MDB in 2009.

British based PGI has yet to supply any proof to back up their ‘expert analysis’ and accusations of forgery made last July.  Perhaps they too can assist the professional law enforcers by indicating the whereabouts of their top client? 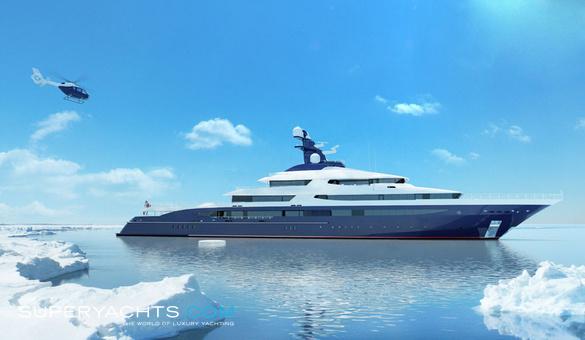 Cutting a trail through the arctic!  Jho Low’s super-yacht has a special helicopter pad so he can fly on board from safe havens around the world – handy for fugitive billionaires