Through The Looking Glass - Into The World Of Najib Razak COMMENT 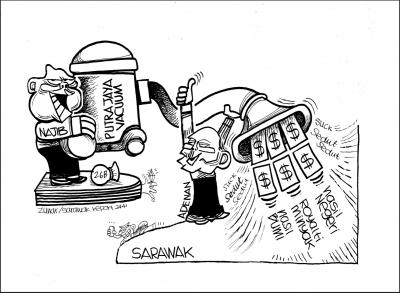 ‘Seditious’ cartoonist Zunar gives his take on the Sarawak scene

Blatant and jaw-dropping bribery, bullying and law-breaking by the ruling BN party have reached unprecedented levels, even for Malaysia, as every day reports of new excesses continue to shock.

But the desperate Prime Minister plainly does not care.  He has personally taken charge of the whole charade, touring around the state handing out money “from BN” to everyone he wants to bribe.

Meanwhile, opposition leaders and activists are being openly barred from the state or told by the score that they have to leave in advance of the election, so that they cannot be present to assist in monitoring the count. So much for Adenan reforming the bad old ways of Taib Mahmud.

Postal votes from thousands of absent West Malaysian soldiers are being utilised to flood constituencies they are not from;  the practice of refusing to issue ID cards to opposition communities persists and of course the gerrymandering alone means that the opposition would have to win over 70% of all votes to even gain a simple majority of seats.

Browbeaten and exhausted opposition folk, who have no money, compared to resources of hundreds of millions of ringgit, fleets of helicopters and all the apparatus of the state in the hands of BN, can only stand by and protest.

Public money from 1MDB is being thrown at Sarawak 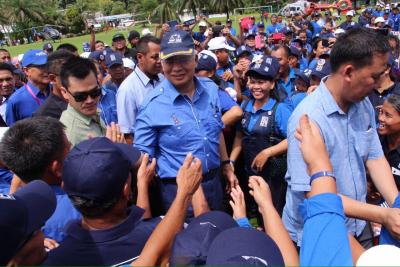 Najib and Adenan are clearly perfectly willing to use money that has been stolen from the state, through 1MDB and timber cronies, to lavish on communities, who know that they only see this manna from heaven when elections come around.

Gifts of a couple of million ringgit to a church here, cheques of thousands of ringgit to schools there, crackly notes for every voter….

The fact that these gifts are peanuts, compared to what BN’s politicians have looted from the people of Sarawak, in terms of their natural resources and land rights, is something they have taken care to hide. During their decades of cynical exploitation this ruling clique have sneered that Sarawakians are “blind” to the wealth of their own state.

In fact, promised ‘projects’, handed out illegally during this election period in the name of BN, will almost never be fulfilled. Only ‘contracts’ will be given to the movers and shakers of these communities, who instruct their longhouses what to vote.  They are threatened that if their communities don’t vote for BN, then they will be treated as enemies of the government – and that will make life hard indeed.

To observers from the outside world it is all, therefore, a total shocker: a sham election if there ever was one.

Najib no longer cares about appearances

However, Najib has plainly ceased to care about appearances, if he ever did.  In his looking glass world it simply doesn’t matter that he is blatantly indulging in such outrageous abuses and illegalities, because he will make sure his client Malaysian media reports a completely different story for his domestic audience.

Those who don’t comply are already being harassed and threatened by Najib’s stack of new laws designed to ‘protect a democratically elected government’ from ‘seditious forces’ etc etc. 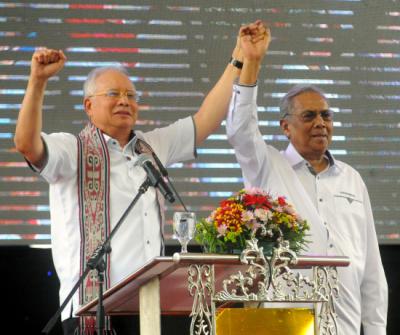 The Institute of Journalists has protested at this persecution of their members, trying to report the truth, but Najib, supported by Adenan, has shown no hesitation in abusing his authority over the Election Commission, the police, the civil service and even the once independent judiciary to ignore all such complaints.

Thus he determines to bludgeon a “great victory” in Sarawak.  If in the end this also demands a further bit of cheating at the ballot box, so what?  The opposition can always be banned from the count or their officials bought over by huge bribes, the logic goes. It’s all happened before.

Najib will then announce through the looking glass world of his Malaysian media that the glorious result has entirely vindicated his position – in a nutshell, that he has been “cleared” by the electorate. “Foreign” critics and domestic “subversives” will be told to take a hike.

The fact that the world knows that the money Najib has been lavishing in Sarawak was stolen from the public purse will be ignored – the anonymous ‘Saudi Royal donor’ can always be said to have returned back what was previously allegedly returned to him – who cares?  The Prime Minister will present himself as an all Malaysian hero and the whole of the domestic media will be forced to report the matter in this fashion – or else risk jail.

Maybe this ‘victory’ will present him with his widely mooted opportunity to slam his own former party leader, the 90 year old Dr Mahathir behind bars, for having dared point out his grand theft from 1MDB?

The opposition leader, Anwar Ibrahim, has already been trapped in jail for over a year, for the sin of being far too effective an opponent for Mr Najib …. another outrageous advantage granted to BN over the leaderless PR coalition in Sarawak.

To Najib’s way of thinking it simply doesn’t matter if the world knows the truth, even most Malaysians, because as long as he can mobilise huge sums of cash then he can control the party leaders in charge of UMNO and control the electoral charade he calls democracy.

The reality is different

However, in the real world on the other side of the looking glass from Malaysia, an entirely separate scenario is starting to unfold, which Najib Razak appears determined to ignore, in a triumph of wishful thinking over stark reality.

Najib and those around him have lost their judgement if they think Malaysia can defy the rest of the world economy, along with the global regulators and enforcers of law and order, simply to save the position of one man, who has been caught stealing vast sums from his own country.

Add to that the demand yesterday from Bank Negara that 1MDB further repay the US$1.8 billion it deceptively ‘invested’ into PetroSaudi.

And to that the blood-curdlingly deadly investigations that are daily progressing in Singapore against the managers of BSI Bank, who processed the cash stolen through Good Star by Jho Low along with other key accounts for 1MDB, SRC and Aabar Investments PJS Limited.

Not only has the Singapore Commercial Affairs Department described this BSI investigation as the most complex cross-border money-laundering exercise they have ever undertaken, they have also highlighted the “staggering amounts of money” involved.

The rest of the world, Luxembourg, Abu Dhabi, Switzerland, the United States and a growing list of other investigating jurisdictions are all shocked too – and they clearly mean business given the actions and statements of recent weeks.  Now the wheels are in motion does Najib seriously think he can stop this process in a wider world, where he has no powers whatsoever?

This is money that was taken out of 1MDB and then laundered through a network of companies managed by Jho Low and later his accomplices from Aabar.  A great deal of this money went to Najib and his step-son’s Hollywood production company.

The details are complex and need to be teased out, but sooner rather than later players are going to be prosecuted and the money trail revealed.

Does Najib think he can escape the situation by continuing to say black is white in his looking glass bubble of Malaysia and handing out yet more of the stolen public cash to his client party fixers?

What happens when the global economy inevitably reacts to the revelation that Malaysia is being run by a master thief and criminal, whose bank accounts are frozen world-wide and whose pet fund is billions of dollars in the red?

How will Malaysian business respond to a plunging ringgit, which this will inevitably trigger?  Suddenly, Najib’s cash will seem less helpful to his crony clients and business borrowers.

Malaysians will discover that their country has become an international scandal with a world record thief for a leader, taxes rocketing to bail him out and a plunging currency to boot.

So, although Najib thinks he can use all his concentrated powers to force black to be called white in the domestic media, the truth is that this Prime Minister has lost control. He can no longer steer events, even though he tells himself he can….. because the alternative is something he fears to contemplate.