Is It Worse To Steal USD7 Billion Or To Steal A People's Election?

Najib Razak has never shown the slightest sign that he has ever worried about the morality of either of these sinful acts and he was therefore bouncing up and down in Kuching last night claiming ‘victory’, alongside Adenan and all Taib’s timber tycoons.

Meanwhile, down on the ground, opposition candidates like Marudi’s Ella Bit were wondering how it could be that they were leading at the counts all day… until that last stuffed ballot box came in with nothing but BN votes?

Perhaps the latest concern expressed by Bersih might be relevant?

The clean up politics campaign is asking how it is that the official election turnout, which was recorded as low all day, had leapt from a record low of just 52% at the close of polls to a sudden announcement at midnight that the turnout had been 70% after all?

Go on Najib, pat yourself on the back…. and don’t forget those bonuses you promised the lads down at the Election Commission.  Meanwhile, the rest of the world and the rest of Malaysia don’t believe a word of it. 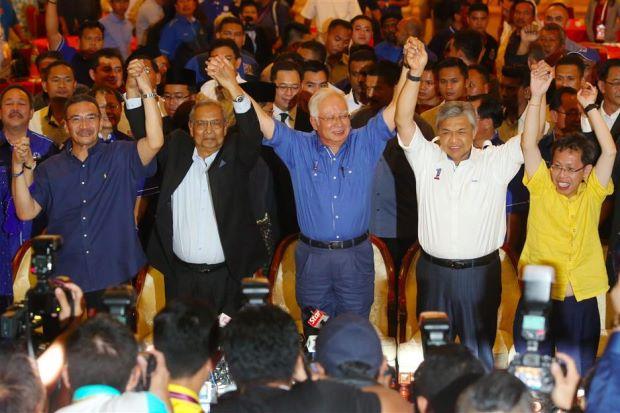 Najib and 1MDB had “nothing to do” with Sarawak, claimed Adenan – but Najib was certainly there in an unprecedented bid to claim a share of the ‘victory’

Of course, the squabbling opposition parties must take their share of the blame for the failure to control the situation. But, their leader is in jail and that’s what happens when there is no leadership, which is why Najib put Anwar inside.

And the media too. There was one hot story in this campaign, which was vote buying, vote rigging and all the rest.

However, with very few exceptions the Malaysian media establishment lined up like the proverbial three monkeys and insisted on reporting this election as if it was a genuine poll in a genuine democracy… analysing the vote as if people had made up their minds according to policies and personalities, not “money politics”, as it is politely referred to when at all. 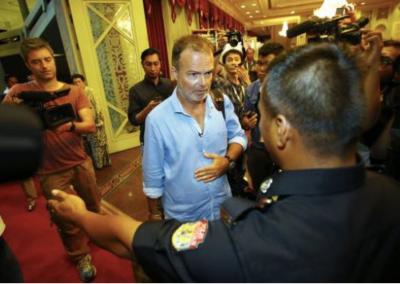 In the end, it was just one foreign news crew, which stole the show.

The UK’s Channel 4 News was able to get more evidence than the rest of them put together about what was really going on and when they finally turned up at Najib’s ‘victory’ press conference to ask him some questions about the conduct of this election and also the massive corruption of 1MDB, which had helped to buy it, they found themselves thrown out.

“I’ve seen what I consider to be vote buying going on, I’ve seen some measures of corruption and intimidation as reported by the group Bersih.  I don’t believe this has been adequately reported in the Malaysian media”

said the Channel 4 News reporter. To which one reporter persistently challenged:

“Did you get the proper media accreditation to cover this election, because this is going to be a big issue when this comes up?”

She was plainly oblivious to the fact that it was he who HAD covered the election, whereas she had merely obtained the accreditation.

So Captain Najib plans to continue, patching holes in his leaky vessel through storms of his own making.

Next up, is the next payment due on 1MDB’s billion dollar debts, due Wednesday 11th May.  1MDB are telling everyone they won’t pay “on principle”, whereas the reality that is becoming plainer by the day is that they can’t.

Meanwhile, Singapore are prizing out of BSI employees how they transferred billions from there to Hong Kong bank accounts, in their bid to hide the money that Najib had exported back from his private KL AmBank account following  GE13

And then there is the matter of yet another two elections – an unforeseen result of the Sarawak show, caused by the helicopter crash killing two UMNO MPs.  These are West Malaysian federal seats – Najib will not be able to ban the opposition there.

Or will he?  Will he suspend the elections on some excuse or maybe fabricate a terrorist alert?  Who knows what this discredited Prime Minister and his band desperadoes will cook up next to avoid facing the music?

Meanwhile – treat yourselves to the latest press release authored by UK cub journalist Paul Stadlen and his team on behalf of Rahman Dahlan, predictably attempting to use this concocted election as a validation of Najib.

According to Mr Stadlen, the problem is not Najib, or that billions have been stolen from 1MDB, despite the fact that the entire global regulatory community are presently investigating the money trail.  Rather such issues are all “made up” by the ex-Prime Minister in a plot to install his son… Stadlen carries on to say that Mahathir is paying Sarawak Report and the Wall Street Journal and several others to report a series of “slanderous lies”:

SARAWAK ELECTION RESULT:
STATEMENT BY BARISAN NASIONAL STRATEGIC COMMUNICATIONS DIRECTOR‎
8 May 2016
1.       In yesterday’s critical election ‎in Sarawak, Barisan Nasional won 72 out of 82 seats, a massive margin that far surpasses BN’s target and 55 seat win in 2011 before redelineation. ‎
2.       The people of Malaysia’s biggest state have spoken, and‎ ‎their resounding support for BN under the state leadership of Tan Sri Adenan Satem and national leadership of Prime Minister Najib Razak is clear. ‎ The people have again approved BN’s policies that have brought new jobs, inclusive development, and security and stability to all Malaysians.
3.       This result is proof that the people have categorically rejected Tun Mahathir Mohamad’s Anti Najib Campaign. This is despite all the lies and slanderous media coverage his proxies organised for nearly two years. The result also proves his claim that the Prime Minister must be removed as BN will lose elections under his leadership is just another lie. The result is therefore a crushing defeat for Tun Mahathir.‎
4.       The people now see that Tun Mahathir’s motivation in trying to unseat the Prime Minister is not the national interest, but just a selfish attempt to pave the way for his own son.
5.       Tun Mahathir should accept the democratic will of the people. He would serve his country and his legacy better by accepting that he has failed and retiring quietly.‎
‎
Dato’ Abdul Rahman Dahlan‎
Barisan Nasional Strategic Communications Director,‎
Minister for Housing, Local Government and Urban Wellbeing.‎‎ [ie. Paul Stadlen] 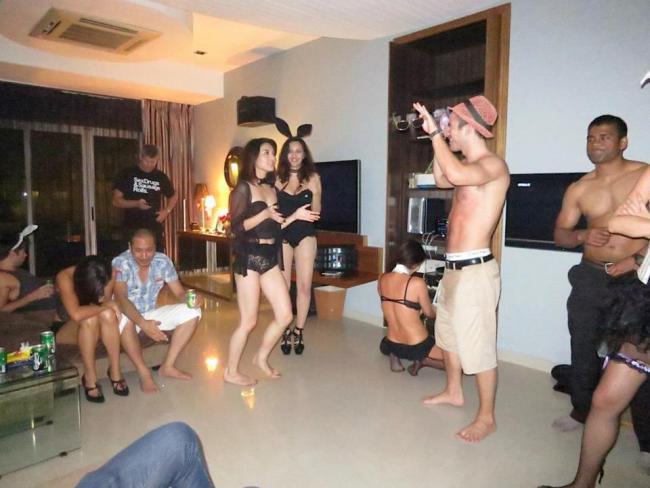