London Mansion Is Under Riza's Name - Paid For By 1MDB! 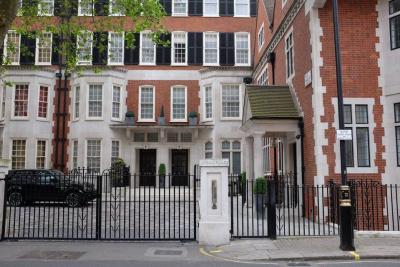 A Najib family mansion in London’s Belgravia, originally identified by Sarawak Report, was bought in 2012 under an off-shore BVI company, which has now been shown to be beneficially owned by step-son Riza Aziz, according to the Wall Street Journal.

The paper also claims that investigators have now confirmed that the money used to buy it came from 1MDB!

The revelation comes in the same week that UK Ministers welcomed Najib to London to what Lord Marland, Chair of the Commonwealth Enterprise and Investment Council,  described as a “love-in” over Malaysian investments, such as the Battersea Power Station complex.

Both Marland and Foreign Minister, Hugo Swire, adopted the line to enquiring journalists that they “could not act judge and jury” over the 1MDB matter, which they described as being an ‘internal Malaysian affair’.

However, UK officials are looped in to the global money laundering investigations into 1MDB, by virtue of British banks, businessmen and off-shore entities involved, and therefore cannot have been unaware that this major investment in UK property has now been identified to have been funded by money stolen from Malaysia’s public development fund.

There are likewise concerns over a Notting Hill mansion belonging to the UK Director of PetroSaudi, Patrick Mahony, which can also be shown to have been purchased directly from money which the Malaysian Central Bank, 1MDB Board of Directors, Malaysian Public Accounts Committee and Malaysian Auditor General have all condemned for being misappropriated from the 1MDB PetroSaudi joint venture in 2009. 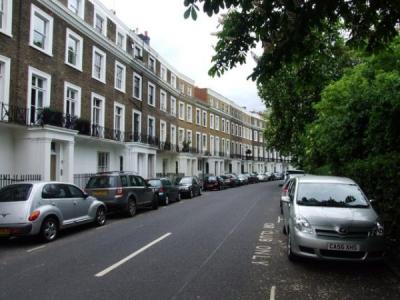 So, how have ministers justified their tolerance of Mr Najib, whom they know has also implemented illegal crackdowns on his own citizens for trying to raise these issues and establish investigations in Malaysia, when they had evidence that money was being laundered in London?

“I am not in a position to act as judge or jury. I prefer to leave that to
the Malaysian people and courts to determine the outcome of these accusations”.

[says Lord Marland, who has apparently kept himself conveniently unaware that Najib Razak has abused his executive powers in order to prevent the Malaysian people and its courts from taking action]. 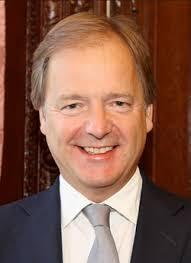 Hugo Swire – not there to judge Najib?

However, anti-money laundering legislation, to which Britain has signed up, means that once corrupt monies are discovered to be invested in their jurisdiction, the matter is no longer merely a problem for Malaysians, who are being illegally denied their rights to an investigation by a blatant abuse of power by Najib.

It is also a matter of obligation for the British authorities to investigate and pursue!

Earlier this week Sarawak Report provided details of how Riza Aziz has furthermore pursued business from his London base, next door to which he has also hired ‘production offices’.

The Malaysian Prime Minister’s step-son has made clear through his managers that he has several millions at his disposal, which he wishes to invest in several global enterprises. Yet, there is little evidence available as to how this young man in his 30s, who worked for two years as a banking assistant in London, could have legitimately acquired this immense fortune, which has also enabled him to launch Red Granite Pictures in the US and to purchase at least two Beverley Hills properties as well as a New York Mansion. 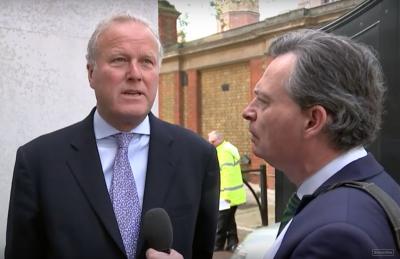 Up to Malaysians not us? Lord Marland

Following extensive reporting by Sarawak Report, all denied by Riza and Red Granite, the WSJ has further identified that US investigators have now directly traced over US150 million invested in Red Granite and roughly the same again in Riza’s properties to money “borrowed” from 1MDB.

British Ministers may choose to say that 1MDB is Malaysia’s businesses and to take no notice of the fact that Najib has illegally abused his executive powers to close down judicial, parliamentary and his own party’s investigations against him.

They may further choose to ignore that he has cracked down on the public’s right not only of protest but even of freedom of speech on the matter, even via twitter, facebook and internet debate.

However, they cannot legally ignore money laundering in Britain’s capital city, once it has been drawn to their attention. As, one of SR’s commentators has pointed out these were David Cameron’s words at his corruption conference last week:

“When people steal money from your country and hide it in mine we will expose them and return the money.”

Read the WSJ below:

The stepson of Malaysian Prime Minister Najib Razak bought a £23.25 million ($33.6 million) house in central London in 2012 with money originating from the troubled Malaysian state investment fund 1Malaysia Development Bhd., according to people familiar with the situation.

The redbrick four-story house, built around 1900, is part of a row set back  from the road and protected by security gates, a short walk from Malaysia’s diplomatic mission in London’s exclusive Belgravia neighborhood. The registered owner of the house is Qentas Holdings Ltd., a company based in the British Virgin Islands. Mr. Najib’s stepson is the beneficial owner, the people familiar said.

Investigators believe that money from the Malaysian fund known as 1MDB was used to buy the house in July 2012. The Wall Street Journal has previously reported that  Riza Aziz, a film producer and stepson of the Malaysian leader, used money that originated from 1MDB to buy $50 million worth of properties in New York and Los Angeles and to finance the 2013 movie “The Wolf of Wall Street.”

“There has never been anything inappropriate about any of Red Granite Pictures or Riza Aziz’s business activities,” the spokesman said. “What they have done and will continue to do is develop and produce successful and acclaimed movies that have generated more than $825 million in world-wide box-office revenues.”

Money used to buy the properties in London and the U.S. was part of at least $238 million that was transferred to an offshore company owned by Mr. Aziz called Red Granite Capital from another offshore company set up to resemble an Abu Dhabi company 1MDB did business with, investigators believe, according to people familiar with the matter.

The offshore company, Aabar Investments PJS Ltd., received more than $3.5 billion from 1MDB over several years. It has a similar name to Aabar Investments PJS in Abu Dhabi, which is owned by one of the Emirate’s sovereign-wealth funds called International Petroleum Investment Co. IPIC has said in a filing to the London Stock Exchange that the Aabar in the British Virgin Islands that transferred money to Red Granite Capital isn’t part of its corporate structure.

A $133 million tranche of the money was received by Red Granite Capital in June 2012, according to documents reviewed by the Journal. The London property was acquired a month later without a mortgage, according to the U.K. Land Registry.

Mr. Aziz has denied wrongdoing, as has Mr. Najib.

Mr. Najib attended a conference in the U.K. capital on May 16 to promote investment in his country. He told business leaders and politicians gathered at Marlborough House, the headquarters of the Commonwealth group of nations, that Malaysia is an “ideal partner.” He urged the audience to look at the “real story in Malaysia” instead of believing certain media stories without specifying which stories he was referring to.

More than $1 billion originating from 1MDB landed in Mr. Najib’s private bank accounts, the Journal has reported, citing people familiar with probes in two countries. Some of the money was used to pay for political spending in Malaysia, as well as clothing and jewels, according to Malaysian investigation documents that include bank-transfer information.

Mr. Najib has acknowledged he received $681 million as a legitimate donation from Saudi Arabia and that most of it was returned. Malaysia’s attorney general agreed the money came from Saudi Arabia legally and cleared Mr. Najib of wrongdoing.

The fund was set up in 2009 by Mr. Najib to boost the economy using money borrowed from the global markets.

1MDB is today at the center of corruption probes by authorities in Malaysia and six other nations. Investigators believe as much as $6 billion of the fund’s money was siphoned away, according to a person familiar with one country’s probe. The fund has said it would cooperate with investigators, but maintained its investments were accounted for.

The Ministry of Finance of Malaysia, the owner of 1MDB, accepted the resignation of the fund’s board of directors earlier this month after a report from a parliamentary committee criticized decisions made by the firm. It also dissolved its board of advisers, which Mr. Najib chaired.

1MDB has said it would cooperate with investigations but hasn’t been contacted yet by any outside agency. It has maintained that all its investments are accounted for.

Just four days before Mr. Najib’s London speech, U.K. Prime Minister David Cameron convened a major anticorruption summit at Lancaster House, a few hundred feet from the Commonwealth headquarters. Mr. Cameron condemned unspecified corrupt politicians who steal from their countries and use companies in offshore financial centers to secretly buy properties in London to launder their ill-gotten gains. He announced a new public register of all beneficial owners of property in the U.K. Plans to include property already owned and not just future transactions went further than some had expected. Foreign companies own 44,000 London properties, according to the government.

“We want to clean up our property market and show there’s no home for the corrupt in Britain,” Mr. Cameron said at the conference. “When people steal money from your country and hide it in mine we will expose them and return the money.”

“Britain is an international trading and investing nation,” Mr. Cameron said. “There is no country that is entirely free from corruption.”

“What we decided there and what was discussed there has universal application but I am not aware that that should impact on anything we are discussing this afternoon,” Mr. Swire said. “I am not setting myself up as a judge and a jury.”

Prime Minister Najib was introduced at the investment conference by Jonathan Marland, a member of the House of Lords and a former trade envoy for Mr. Cameron. Mr. Marland described the conference as “a huge love-in.” He thanked the Malaysian prime minister for his crucial role in securing investment from a Malaysian group of companies in 2012 to redevelop London’s Battersea power station, a multibillion-dollar project by the River Thames.

“When our country was at its knees you came and invested,” Mr. Marland told the Malaysian prime minister. He later told the Journal that he didn’t want to “interfere” in Malaysian internal affairs by commenting on 1MDB.