Ready to riot for Najib

Najib has not hesitated to get his paid-up bullies in Red Shirts onto the streets to threaten ordinary folk, following the DOJ’s devastating details over his thefts from 1MDB.

But it’s next week that he plans to really take charge.

On 1st August his shocking National Security Act comes into force, designed to hand him dictatorial powers wherever he likes, against whom he likes for any six months at a time. Then he can renew those powers.

The bill was introduced without warning late on the final day of the Parliamentary session at the end of last year. Surprised MPs were given no time to scrutinise it, let alone put forward amendments and the debate was cursory as it was rushed through its stages in an effective pre-planned coup by the Prime Minister against his Parliament and the democratic rights of his own people.

Even the Sultans and the Agong have been shocked into a rare refusal to sign it unamended – but rather than accept their counsel on a matter of core national security he has brushed their concerns aside and forced it into law unchanged or re-considered.

That Najib’s excuse was the need to combat ISIS is no surprise.  Yet the terms of this Act would lead anyone to conclude that Malaysia has experienced worse threats than Europe, Indonesia and the US put together, which of course is not true.

None of those countries have attempted to create such sweeping powers to combat terrorists – the reason being that this law has nothing to do with fighting criminals… and everything to do with protecting the one who is presently in charge. 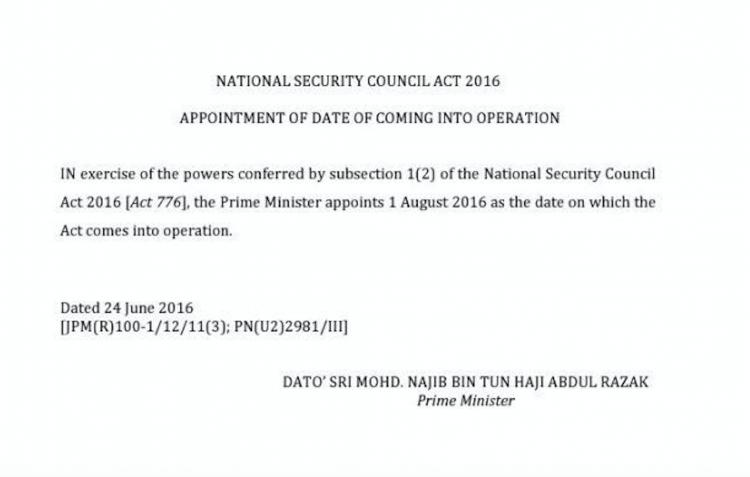 Is Najib Razak a safe pair of hands for such powers?

To give just a single example of the evil intent of this National Security Act, consider the clause that cancels the formal inquest into the death of anyone killed by army or police in any crackdown under its provisions.

Someone must have thought closely to insert such a sinister detail in advance.  That someone must have decided that they are tired of being inconvenienced by all the paraphernalia of the law when it comes to murder cases. That person wants to be freed from questioning and investigation, when someone who gets in his way is ordered dead.

Does Malaysia want to place such a dangerous law in the hands of a desperate thief and liar like Najib, who is furthermore himself personally associated with a string of murky, half-solved murders?

And yet, the mainstream press in Malaysia has been almost as silent on this deadly law, as over the shocking revelations by America’s Department of Justice about their Prime Minister’s thefts from 1MDB.  The story which has been headlines for the past two days in every other country in the world has remained virtually unreported where it is most relevant – Malaysia. 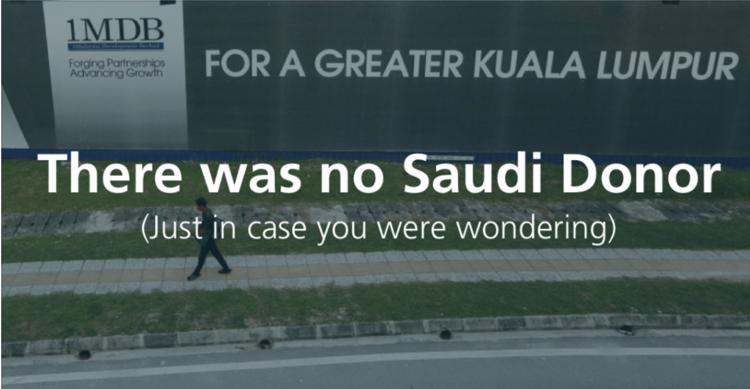 What press coverage there has been has even attempted to pretend that the description of Najib as ‘Malaysian Official 1′ means that he has somehow not been identified in the US indictment.  Do they think Malaysian’s are laughably stupid?

For the avoidance of doubt the PM is plainly and clearly identified in the United States Department of Justice indictment as the corrupt official who received $681 million in his private bank account direct from 1MDB (no Saudi Royals in sight).

The rest of the world media has had zero problem in making the connection, as evinced by the headline at the top of this article.  It is merely that legal documents only cite by name those who are directly moved against in that indictment – since Najib placed the US-based loot in the name of his step-son Riza and Jho Low (both now hiding in Malaysia and Taiwan) he was not directly relevant to that indictment.

However, his proven duplicity and shocking level of corruption is supremely relevant to people in Malaysia.

There is an over-used analogy, which explains a dangerous torpor, which could finally lose Malaysians their last vestiges of freedom, promising poverty and misery for their country.

A frog will jump out if you put it into hot water, but if you start from cold and heat it up, it stays and cooks.

After years of incremental abuses and ever-worsening corrupted practice, it seems Malaysians no longer understand a tipping-point or see the moment to act.

Revelations that mobilised Icelanders and even people in Brazil to successfully voice their outrage and to pressure the departure of discredited leaders, seem in danger of falling on deaf ears amongst self-defeatist Malaysians, who have perhaps bubbled in the pot too long?

It seems too many prefer to explain why ‘nothing can be done’, rather than take a risk and do it. This paralysis is worst amongst those with the most responsibility to take action now – those around Najib. Their failure to do the necessary is forcing others – ordinary people – to have to do their job of replacing a leader who has lost the plot.

Here we have one of the remaining countries in the world where sodomy remains a crime and was even used to place a popular opposition leader in jail on cooked-up charges. Yet, the population is being asked to nonetheless bend over and be thus abused.

How will once proud Malaysians be able to look other nations in the face if they let it happen and surrender up their freedoms to a thief, who has been exposed and discredited the world over for buying power with money stolen from the poor?