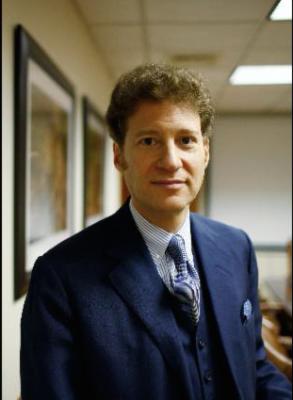 Sarawak Report has learnt that a senior UK politician who holds strong connections with the Middle East was linked to a company that received a $150,000,000 injection of money from Jho Low.

The investment formed 7% of the fund’s total worth of over $1 billion, which is mainly owned by Kaplan’s private family trust, according to filings in the United States and it earned Jho Low a place on the board of Electrum.

Two other major institutions also invested in Electrum at the same time: Abu Dhabi’s Mubadala Sovereign Wealth Fund and the Kuwait Investment Fund together added a further $300 million of investment, the company has said.

However, Sarawak Report has learnt from inside sources that a senior British political figure also held an interest in the company and therefore stood to benefit from these injections of hundreds of millions of dollars from Malaysia and the Middle East.

Top connections – How Jho Low used his partners as referees

Jho Low was soon utilising his connections with Kaplan and also Mubadala to promote Jynwel’s credentials as a global investor and his own image as a man of vision and integrity. A corporate video commissioned by Jynwel in 2014 features Kaplan, extensively praising his new business partner:

“What do we look for in a partner? Someone first and foremost whose word is their bond, that when they say they’re going to do something, you can bank it.” [Jynwel promotional video]

Jho Low also joined the Board of Kaplan’s wild cat charity Panthera, contributing $20 million to the fund and promoting his ‘philanthropy’ in the process.

“In Jynwel we have found a partner that not only shares the same passion for investing that we do, but also is a match for our values… we have worked hand in hand with Jynwel across multiple projects, multiple investments, across multiple geographies” explains Waleed Al Muhairi

These joint investments have included, according to the Department of Justice seizure filing of 20th July, the purchase of EMI Publishing and also New York’s Park Lane Hotel Group, both of which Jho Low funded through money stolen from 1MDB.

The DOJ has already identified a record $1 billion in assets, now under seizure in the United States, as products of money laundering from 1MDB. However, it has stated that at least $3.5 billion was stolen in total from the Malaysian fund, leaving major question-marks over Jho Low’s other investments.

There is therefore considerable speculation over whether the money which flowed into Kaplan’s funds will also eventually be traced to 1MDB.

Spokesmen for Electrum (from which Low recently resigned his post) informed the Wall Street Journal that they are working with the US authorities and have ‘safeguarded and sequestered‘ any potentially tainted funds. 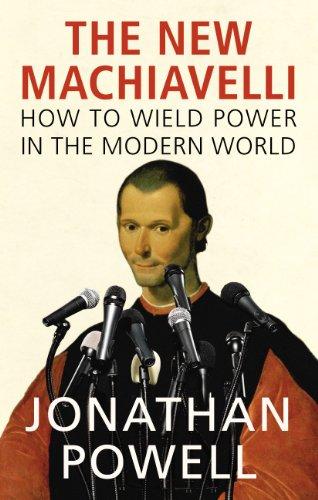 Jonathan Powell’s memoir of his years working for Tony Blair

Whether or not this turns out to be the case, Sarawak Report has been informed that the matter could cause  embarrassment for a senior UK political figure, whose involvement in the Kaplan fund was not previously known.

This is particularly so, given the added investments made by the sovereign funds from the Middle East.

Kaplan, who studied at Oxford University, but is based in the United States, already has extensive links with well-known politically connected figures in the British establishment.

At the front of his most recent book, ‘The New Machiavelli – How to Wield Power in the Modern World’, regarded as an anecdotal memoir of his 13 years serving under former UK premier Tony Blair, Jonathan Powell acknowledges the support and assistance of his ‘colleagues’ Thomas Kaplan, Ali Erfan and Aamer Sarfraz, who are all associated with Tigris Financial Group, in the writing of the book. 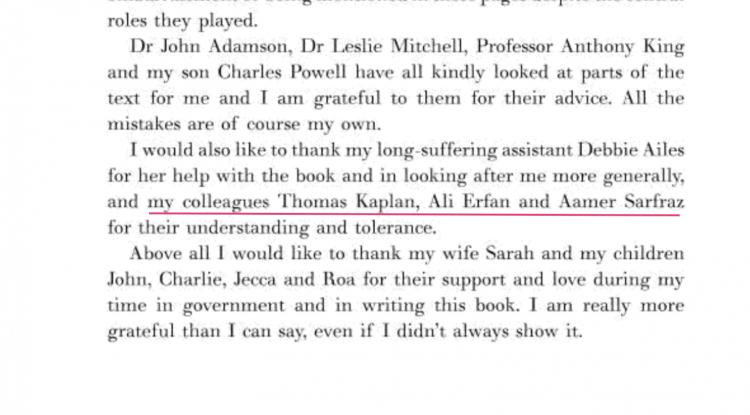 It is well known that after Tony Blair left office Powell continued to play a senior role within his former boss’s private commercial operations, acting as a consultant to his private company Tony Blair Associates and working also with various linked PR and lobbying groups.

Blair was simultaneously Middle East envoy for the United Nations, European Union, United States, and Russia from 2007 until last year.

Considered a player, Powell was himself appointed as David Cameron’s personal Libyan Special Envoy in 2014, on the basis of his earlier diplomatic career and peace negotiations in Northern Ireland. His brother has long been close to the Conservative Party.

Billionaire businessman who stuck his nose into the Middle East

These links have now raised controversy, given Kaplan’s own interests and connections in the Middle East.

After years of non-disclosure, the billionaire has been revealed as the main funder of the campaigning organisation known as UANI (United Against Nuclear Iran), which has been the most vocal opponent of Obama’s recent peace initiatives with Iran, bitterly opposed by the Gulf States and also Israel, where Kaplan has strong ties.

For example, it has been pointed out that the Chief Executive of UANI, a former American Ambassador Mark Wallace, receives no current income from the non-profit group, yet has simultaneously acted as the CEO of Tigris Financial Group and also Chief Operating Officer of Electrum Group, both owned by Kaplan.

Investigative journalists have further identified at least three other staff connections between Kaplan companies and the UANI campaign group, which he funded to the tune of $843,,000 in 2013.

In this context, according to court filings against Kaplan (he was sued for defamation by a Greek businessman, Victor Restis) Jonathan Powell also featured as a board member for UANI in recent years:

“Jonathan Powell, an Advisory Board member of UANI and The Institute for Strategic Dialogue was a college classmate of Kaplan’s and serves as a Senior Advisor to Tigris Financial Group.” [How much money can these two Iran hawks make out of the Middle East?]

Powell appears to have now resigned from this position, but archives show the link:

Politics or the business of instability?

Kaplan has himself claimed that his activities in the Middle East through UANI have made his organisation one of the most effective actors on the political stage and a combat force against Iran:

” “Hard to know what the outcome will be but I do know that as much as United Against Nuclear Iran may not have had Tomahawk missiles and aircraft carriers at its disposal, we’ve done more to bring Iran to heel than any other private sector initiative and most public ones.” [Video of Kaplan speaking on UANI]

However, critics have suggested that his driving motivation is financial.  His billion dollar business, mining precious metals, openly trades on the profitability of instability and conflict in places like the Middle East, they say.

One investigator, who exposed Kaplan as the primary funder of UANI, says there is ample evidence that Kaplan seeks investors in his gold and silver mining ventures by directly pointing to conflicts that threaten economic stability:

The 2002 annual report for Kaplan’s Apex Silver Mines, Ltd., which has since gone bankrupt, contained an insight into his thinking. The report, issued by Kaplan and Apex’s CEO, Keith R. Hulley, asks investors to “consider the following factors: destabilization in the Middle East and Persian Gulf, tensions between India and Pakistan, the potential for nuclear confrontation with North Korea and Iran, […] religious extremism and terrorism on a global scale and corporate hooliganism.”

The solution, explained Kaplan, is that the “trend to invest in companies with real assets and exposure to the non-correlated commodities sector is likely to prove to be long-term and secular rather than cyclical.”

In other words, if you believe political instability is likely, invest in assets like those mined by Apex.

And Wallace, as CEO of Tigris, oversaw similar language in a 2011 prospectus — after his stint with UANI commenced — for the Sunshine Silver Mine Corp., an Idaho mine owned by the group, which he played an active role in acquiring. “Investment demand for silver exposure remains strong,” said the prospectus, which was filed with the SEC, “driven in part by continued U.S. dollar weakness, ongoing economic uncertainty in Europe and political unrest in the Middle East.” [Eli Clifton, Document Reveals Billionaire Backers Behind United Against Nuclear Iran]

The message must surely be that politically connected people with links to the Middle East should shun business with Thomas Kaplan, if they want to avoid embarrassment, because his business benefits from further conflict and his organisation meddles actively in the politics of the region.