Following the allegation by the Swiss Attorney General that US$800 million was stolen from the 1MDB subsidiary SRC International, Sarawak Report can reveal details of multi-million ringgit cash deposits made by the Chief Executive of that fund into bank accounts held in the name of Prime Minister Najib Razak.

Bank statements made available to Sarawak Report show that at least five separate cash deposits were made into two of Najib’s AmBank accounts in KL, totalling RM3.4 million between 2nd February and 3rd March 2015. The sum represents 34 times his official salary of RM100,000 per month. 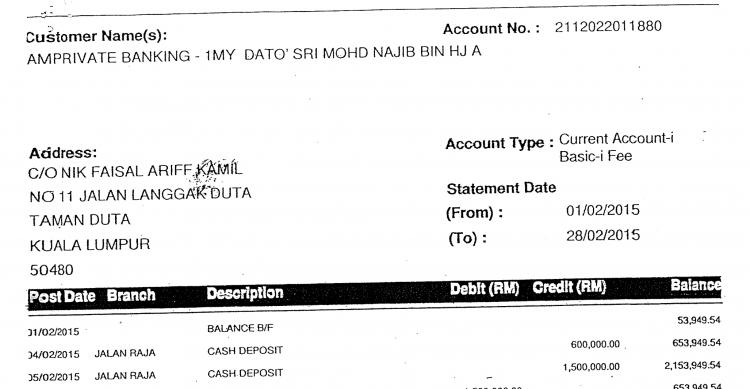 According to the statements these accounts were held in the name of Najib Razak, but managed by none other than SRC’s CEO, Nik Faisal Arif Kamil, to whom the statements were addressed

Nik Faisal, who was a long-standing business associate of the tycoon at the centre of the 1MDB scandal, Jho Low, was employed at the same time as Chief Executive of the much criticised SRC, which had been set up as a subsidiary of 1MDB. Prior to that he had acted as Investment Manager for 1MDB, while simultaneously acting as Investment Manager for the company UBG, at the time when Jho Low secretly deployed 1MDB money to buy out his own shareholding in 2010.

In 2011 SRC was financed by a RM3.81 billion loan from the public pension fund KWAP and Nik Faisal was deployed to be in charge. However SRC has never produced a single audit to explain where that money went.

On Wednesday, the Swiss AG, who together with Singapore’s Commercial Affairs Department has investigated the now closed Singapore branch of BSI Bank, where SRC held its accounts, confirmed the bulk of the money (a staggering $800 million) was misappropriated. 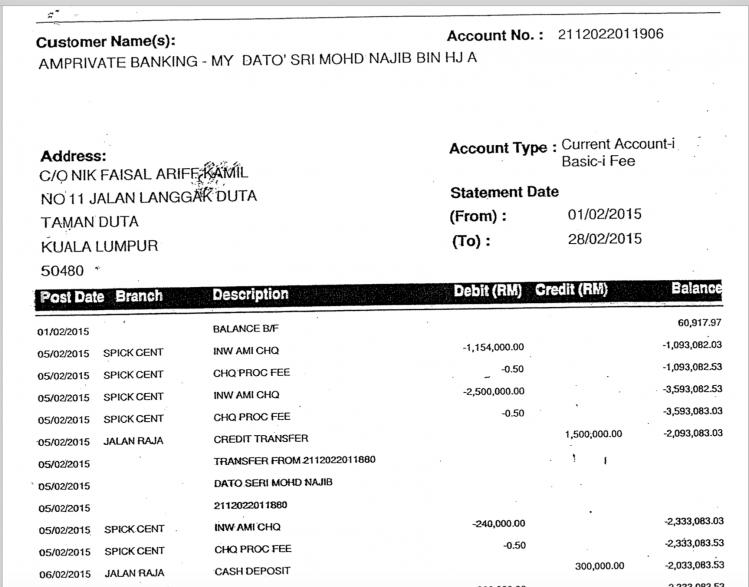 Pensioners who have invested their savings in KWAP are entitled to ask why the man who was officially in charge of investing their money through SRC was also privately managing the Prime Minister’s own accounts?

In January, after Malaysia’s own Anti-Corruption Commission investigators provided evidence that a total of at least RM57 million had passed from SRC into three of these private accounts managed by Nik Faisal for the Prime Minister,  Malaysia’s own Attorney General, Mohammed Apandi, ruled there was no case to answer.

Najib had claimed he did not know where the money had arrived from and had assumed it was part of a claimed Saudi donation. He has not paid the money back and credit card and bank statements indicate that the bulk was spent on luxury goods as well as cheques written out to as yet unnamed recipients.

However, mystery continues to surround the multi-million ringgit ‘Urgent Cash Deposits’, which were separately paid into the same bank accounts – and therefore not directly traceable to SRC:

“It means the cash was carried physically into the bank – that is a heck of a lot notes to stuff in a bag then lug up to a till to be counted” one banker commented to Sarawak Report.

Correspondence obtained by investigators shows that once again it was SRC Chief Nik Faisal Arif Kamil who was responsible for handling the cash deposits.

A letter dated 20th January 2014 shows that, as the “Authorised Person” managing Najib’s accounts, Nik Faisal appointed a deputy to make ‘urgent cash deposits’ while he was absent abroad. 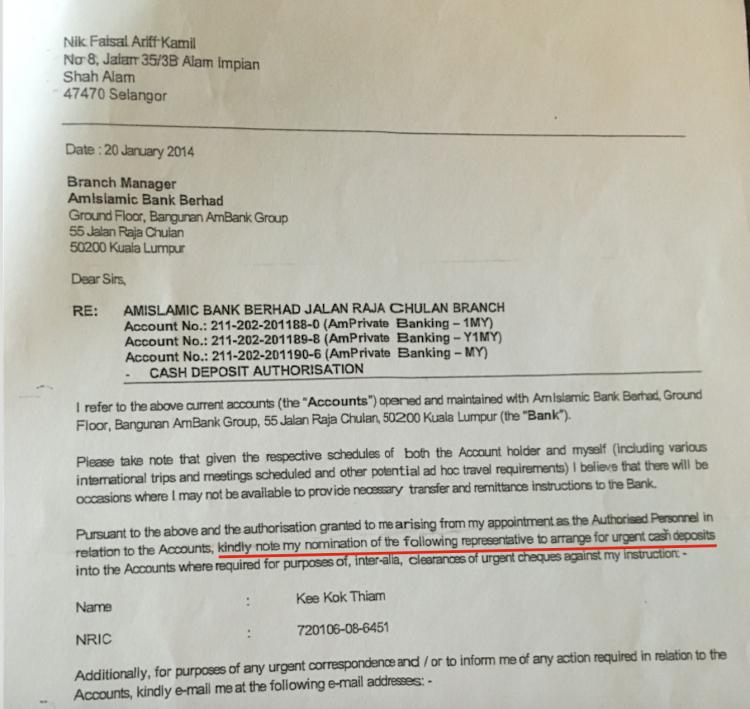 As the “Authorised Person” managing Najib’s accounts Nik Faisal appointed a deputy in January 2014 to make ‘urgent cash deposits’ while he was absent abroad.

These deposits, according to the letter signed by the SRC Chief Executive, should be utilised, amongst other things, for the clearance of urgent cheques as per his instruction.

On these occasions the money was all carried in to the Jalan Raja Branch of AmBank, in what would appear to have needed very large suitcases, particularly in the case where RM1,5 million was banked in a single day.

Given that this snapshot of one month’s payments took place a full year after Nik Faisal Arif Kamil wrote to the bank referring to his need to make cash deposits of this nature, it can only be assumed that the RM3.4 million paid into Najib’s accounts in February 2015 were part of an established pattern of similar gross cash injections.

How the Prime Minister was able to acquire such enormous sums of cash outside of his normal official duties has remained unanswered, nor whether any of this money (Najib is also Finance Minister) was subject to tax. 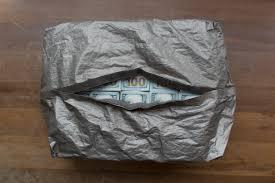 Heavy bags – 10,000 notes for every million ringgit makes a lot to carry into the bank

These payments were banked by one of her personal bodyguards,

Members of Najib’s own family have gone on public record to reject certain claims by prime ministerial spokesmen that his ostentatious spending was funded by inheritance. So the question remains as to what the source of these astonishing cash deposits can possibly be?

However, the inaction of the fund and its Chief Executive appears now explained, given the Swiss Prosecutor’s allegations that the money has all now been misappropriated and so little remains to be invested. Those “harmed” ie pensioners in KWAP have been invited by the Swiss to register their interest in the Swiss courts.

The authorities in Malaysia ought surely to have tough questions for Nik Faisal as to why having taken up his post at a supposedly independent public fund he subsequently set up three bank accounts in the Prime Ministers name, which he managed on his behalf.

And, moreover, why he then transferred millions of ringgit from SRC into those very same accounts, which were then spent on private luxuries by Najib Razak?

Might they also care to investigate information from official sources that Nik Faisal’s friend and colleague, 1MDB advisor Jho Low, was known to regularly import bags of solid cash, using privileged customs channels, on arrival from Singapore to KL?

Particularly so, given that when further money was siphoned in December 2014 from SRC that money was transferred through none other than the construction company Putrajaya Purdana Sdn Bhd, which is also linked toJho Low? 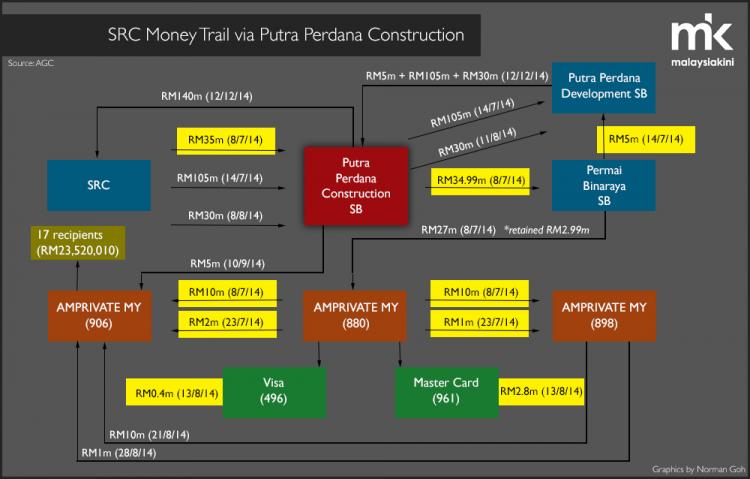 Putrajaya Purdana, formerly owned by the Taib family and Jho Low, was allegedly bought out by PetroSaudi in 2010, although it is now established the money came from 1MDB and Jho Low controlled the purchasing entity Javace Sdn Bhd.  It was then sold on again at a shocking discount to Cendana Destini, which in 2012 offloaded 30% of its shares to the public pilgrimage fund, Tabung Haji.

The Swiss AG on Wednesday announced they have yet to receive cooperation regarding SRC’s foreign transactions from Malaysia’s AG, just as the MACC have likewise complained he refused to cooperate on the matter of the SRC money transferred to Najib.

So, little surprise there has been inaction also over this separate matter of all these bags of cash.

*This has been corrected from an earlier error, which wrongly placed the date as 2014