More Questions Over 1MDB's Secret Bail Out From China

Malaysians have now had time to absorb the devastating details of the July document, showing the secret deal hammered out by Jho Low with the Chinese state construction company CCCC to hide 1MDB’s debts behind the East Coast Rail Project.

We published several pages in full in our last story.

Readers will see that under the terms of the deal China agreed to advance the Minister of Finance (Najib Razak) a mammoth RM60 billion loan (at 2% interest over 20 years) to cover the combined cost of the railway and the repayment of 1MDB’s emormous losses, caused by theft.

In July, when we first released details of the agreement, ministers claimed the leaked document was a forgery and a lie.

But, sure enough, just weeks later in October Najib went to China and signed up to exactly the same provisions earlier revealed by the document, including the ‘fast track’ selection of CCCC to carry out the rail project and that 2% loan over 20 years, which he called a triumph because of the low interest rate.

Yet 1MDB had already signed up to extortionate levels of interest to borrow the money in the first place and is therefore having to fork out the further 2% on top to repay China for secretly bailing it out.

According to the schedule (which we can now take as confirmed) US$52.4 million and US50.3 million will have to be paid in interest every six months until 2022 to cover the two 1MDB Power Purchase loans, at which point the principle of US$1.75 billion has to be repaid on each in May and then October of that year.

That makes for twelve payments of $102.5 million plus another $50.3 million, totalling US$1.23 billion, plus the US$3.5 billion principle loan, which all has to be borrowed at a further 2% over 20 years.  It therefore amounts to over US$6 billion altogether to repay just these two loans, which represent around a quarter of 1MDB’s total debts.

In return, Malaysia has got precisely nothing from this ‘development scheme’ devised by its Finance Minister, since the supposed power purchase assets that the loans were alleged to be buying have now been disposed of (once again to China).

Jho Low, on the other hand, is still floating around on a very fine yacht and attempting to contest a billion dollar asset seizure by the United States, relating to properties bought with stolen 1MDB money.

Key provisions of the secret deal also included a commitment by CCCC to to buy out two controversial companies linked to Jho Low, PPB and Loh & Loh (see previous article) as well what is known as the Ayer (Air) Itam land asset in Penang, controlled by a subsidiary of 1MDB called My City Ventures Sdn Bhd. 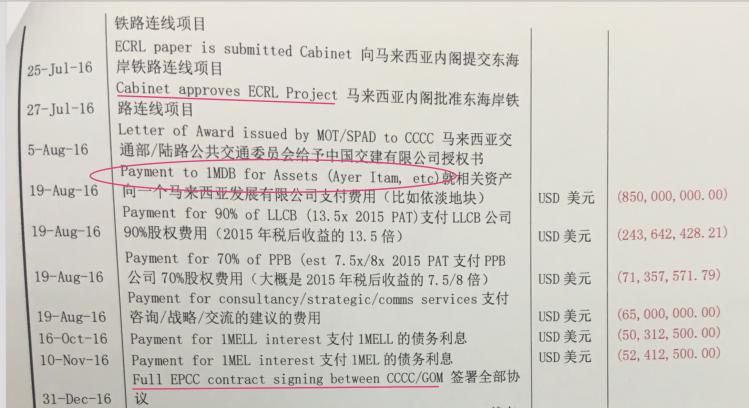 Given that Najib and his ministers had recently made several statements claiming that at least four private companies were rivalling to buy the Ayer Itam plot for at least double what 1MDB had paid out for it in 2013, one has to question why they they then secretly agreed to effectively buy it themslves using money to be borrowed from China, via a ‘nominated company by CCCC’?

In March Ministers said that more than one company had offered an astonishing RM2 billion for the Ayer Item plot, which had been purchased for a total of RM1.3 billion.  Yet in the end they off-loaded it to CCCC at a valuation of US$850 million, which represents a whopping RM3.8 billion.  Unfortunately, this is a payment that the Malaysian Government has ultimately agreed to pay itself. 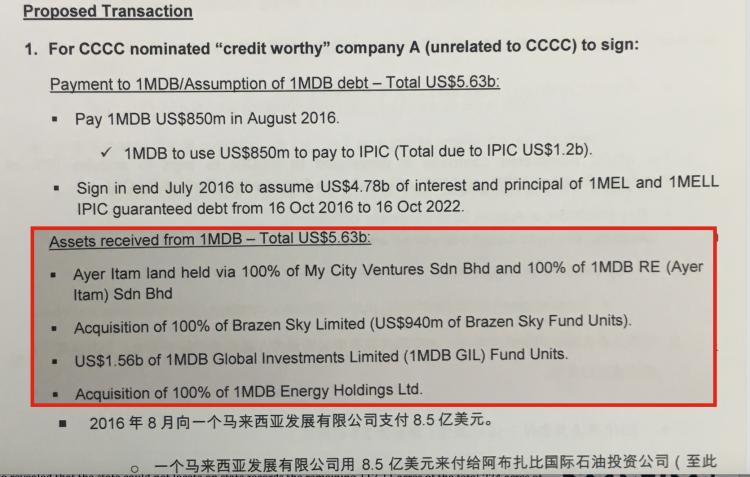 Could it be that the government was lying about the value of its plot and and its claims that private companies had been queuing up to buy it, because in fact  the “asset” is not what it was cracked up to be?

Certainly, the purchase of this land in Penang just days before the 2013 election by 1MDB has been a subject of enormous controversy from the very beginning, as newsreaders in Malaysia are well aware.

Just seven days before polling the fund announced it had shelled out just over a billion ringgit on buying a ‘majority interest’ in the 234 acres of development land and that it was going to build 9,999 affordable homes.  Since the plot just happened to be in the constituency of the Chief Minister Lim Guan Eng, many considered it a blatant election ploy, using public money by Jho Low, who was supposed to be the mastermind behind a big push to win back Penang from the opposition (it failed).

There were other questions too. In characteristic fashion 1MDB had paid hugely more than the land was worth, according to critics, who questioned if cronies were the real beneficiaries of the venture?  Moreover, the terms became even more disadvantageous when the large presence of squatters on the land was taken into account, since it would be hugely expensive to move them.

The Penang Chief Minister made clear that he would not allow these 3.500 families to be thrown off the land without being offered affordable homes in return:

“I want to warn 1MDB that we will not allow them to throw out the present land tenants for a project other than affordable homes,” he said.
He was referring to a recent statement by 1MDB that it planned to build up to 10,000 units of affordable homes and also “other development purposes” to generate higher value for the land it bought here.
“We want them to know that they can only build affordable homes and not ‘other developments’ on that land as this is in Air Putih constituency, my constituency, and I will protect my constituents,” Lim said.
He said he will not allow 1MDB to evict his constituents without any proper compensation. [Malay Mail]

Towards the end of 2015 Lim Guan Eng dropped a further bombshell, which was that land records indicated that 1MDB had only actually come into possession of 20% of the area concerned.  So, who had gone off with the rest of the money from the already inflated purchase price?:

The CM made plain that the price paid by the fund had been exorbitant even before it had emerged that only a fraction was actually registered as being owned by 1MDB.  Given the total lack of transparency over the land purchase and over who actually owned the area, Lim soon went on to announce that planning permission would not be given by the state until the matter was cleared up.

“.. until all questions on the scandal are answered, the state government will block any transaction whether an application for change of land ownership or consent for mortgage. Prior approval of the Penang state excos must be obtained for all these”, he said in a statement today. [26th May 2016]

Thus, by the middle of last year it had become plain that with BN having lost the seat in any case, 1MDB was left holding a very hot potato in Penang and facing an extremely hostile Chief Minister just when they needed to off-load the land to mitigate its cash flow crisis.

The fund was under pressure to explain why so much had been spent on so little actual acreage and it seemed it would have to come clean about the deal before Lim Guan Eng would pass planning permision. 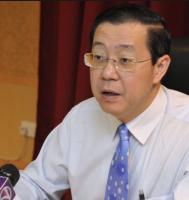 Could any of this predicament be related to the vicious campaign over the past few months, to drive Lim Guan Eng himself into jail on corruption charges?

Politically motivated accusations, indicating that he may have got a good deal on his own home purchase, have been leapt upon by prosecutors and police, despite slender and subjective evidence and the obvious modesty of the property in question.

BN appear determined to drive Lim into jail over this accusation that he bought a cheap home, whilst at the same time failing to explain why they paid top dollar for land that they only acquired 20% of.

Meanwhile, coverage of the Ayer Itam ‘affordable homes project’ tells its own story.

Ealier  announcements suggested the development plans were already ‘in the planning stage’. Then came the statements about rival bidders. Finally, the revelations about the secret deal with CCCC to take on the property as part of its over all agreement to fix all Najib’s 1MDB problems and cover up the fix, in return for the contract and loan from China.

It would appear that the billion passed to purchase Ayer Itam was merely another 1MDB ploy to suck out money from the fund, using well-paid cronies.  It is the pattern after all.  Which would explain why the contaminated project has been chucked into the China bail out deal along with all the other toxic 1MDB projects, as Najib seeks his solve all get-out solution, which appears to involve selling out the Malays to the Chinese.