Foreign investigations have been continuing apace into 1MDB and today further hints have emerged from the US media, courtesy of the Wall Street Journal, that the FBI, who have been globetrotting as they gather evidence on the case, will shortly issue criminal charges.

Top of the list of wanted characters is Jho Low, along with his family whom Sarawak Report have long reported to have been zig-zagging around Beijing and Bangkok, occasionally utilising the small flotilla of boats comprising Jho’s super-yacht Equanimity, the converted tug Lady D and a speed launch accompanying them.

So far there have been no official moves against Directors of the company PetroSaudi, which we have demonstrated were heavily complicit in assisting in the massive thefts via Coutts Zurich from 1MDB from 2009-2011, for which they reaped rewards of hundreds of millions of dollars, paid personally and into the company itself.

Much of that money was paid into setting up drilling contracts in Venezuela, which are now subject to investigations and bitter disputes, after hundreds of millions were spent but virtually no oil extracted.

Now there are indications that regulators may finally take steps against the company. Till now PetroSaudi have vigorously threatened any media who have suggested they might be under investigation.

However, there is now the added issue of the alleged conspiracy to frame and imprison the whistleblower Xavier Justo, with the assistance of a team of British private investigators, one of whom posed as a Scotland Yard detective to the Thai authorities and obtained a forced confession from Justo. 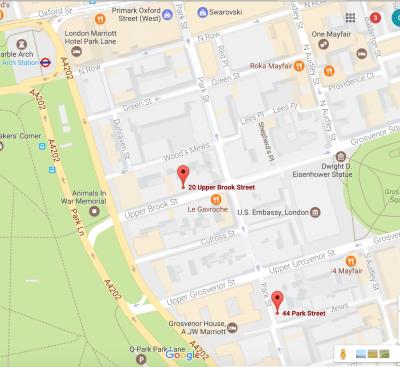 PetroSaudi’s remaining shareholder, Tarek Obaid, is presently believed to be in London and seeking to sell his Mayfair properties, one of which is a grandiose £31 million 18th Grade II listed mansion in Upper Brook Street.  The other is a duplex flat in adjacent Park Street.

Obaid, who also spends considerable time in Geneva, has accumulated a large property portfolio in Switzerland also, much of it under the name of his brother Karim Obaid and he and his brothers have been pouring funds into advertising what they describe as their family’s charitable foundation, particularly on CNN.

The Obaids have also been hiring agencies to clear up their image on Google, according to sources.  Negative stories are being combatted with paid for PR as he and PetroSaudi’s other directors wait to see if the prosecutors will move. 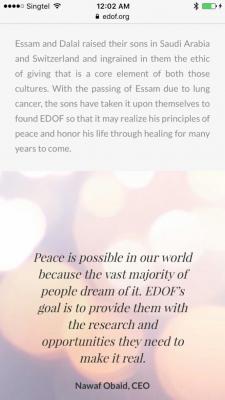 One of the self-promoting posts by Tarek Obaid for his family foundation. However, most of the money came from 1MDB!

Other top potential targets are the Las Vegas Hakkasan nightclub empire, funded by payments from 1MDB through the Edmund de Rothschild Bank account of the so-called Vasco Trust, in the name of Khadem Al Qubaisi, the former Chairman of Aabar.

Also, a host of 1MDB officials and facilitators could be targetted, including its former legal counsel Jasmine Loo, who was identified as receiving a $5 million bribe for signing off money diverted out of the fund. Another lawyer, US resident Sarawakian Tiffany Heah, who worked for Jho Low, his right hand man Seet Li Lin and fugitive former 1MDB Executive Director, Casey Tan.

SRC Director Nik Faisal Arif Kamil, who is named as an authorised person on several of Najib’s bank accounts into which he transferred millions of ringgit of cash borrowed from the KWAP pension fund, is also a name in the frame.

Those close to the investigation have indicated that an emerging pattern of close collaboration between the global investigators in this case will mean that when action is eventually ready to be taken it is likely to be coordinated across the several jurisdictions.