As PM Tells MACC To 'Back Off', We Throw More Light On Gopi's Network Of Top Cops - EXCLUSIVE 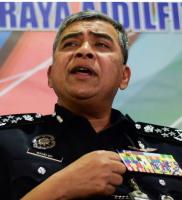 We identified from billing information that the alleged gangster had been in regular contact with IGP Khalid Abu Baker himself, as well as his son and brother in law during the weeks prior to his arrest.

However, Khalid considers himself to be under no obligation to elaborate on the relationship, berrating reporters at yesterday’s press conference:

Yet, the same evidence obtained by Sarawak Report shows that not only the IGP but a whole network of his closest senior officers were also in regular phone contact with the same Mr Gopi prior to his arrest.

Federal CID Head was a top contact of Gopi’s 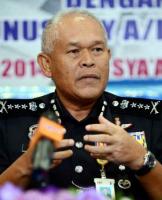 From scores of numbers linked to senior officers, which were frequently called by Gopi, Sarawak Report has already identified, for example, the personal number of Mohamed Salleh (0196000148), who is the PDRM’s Federal CID Director in charge of the nation’s gambling and vice units.

Salleh is a known protege of Khalid’s and given that Gopi and his associates from the Malacca police force have been arrested by the MACC on charges of collecting ‘protection money’ from illegal gambling dens and prostitution houses, the nature of these phone calls must indeed be highly relevant and ought to be investigated.

From billing data between January and April of this year alone, Sarawak Report has identified that Gopi dialed up PJSJ Mohd Salleh at least 8 times. The calls were mostly short, but one on 12th April lasted six minutes twenty seconds and another on 5th February lasted five minutes and twenty four seconds.  An earlier call again on February 3rd lasted 5 minutes and twenty six seconds:

Given the occupation of the receiver and the charges against Gopi, the content of these and all the other calls clearly needs to be fully explained.

The same data throws up a wide number of other numbers belonging to senior police officers, according to our sources, including Hasnan Hassan, the Chief of Police of Perak (0196000326).

For example, Gopi repeatedly called Hassan on 12th February.  First there was a call of just under a minute at half past one in the afternoon. Then later just after two there were three short calls lasting a total of around three minutes:

On 14th April Gopi again called Hassan twice for a total of over three minutes and there was a half minute call the following day:

The two men were in touch again on 17th and 23rd April:

Another top cop on Gopi’s phone network was the Deputy Chief of KL’s CID, ACP Azman Mohd Isa (0194000490), who is in charge of the capital’s Anti-Gambling & Vice Unit.  On 21st January there was a short call then there were four calls then on 31st there were four calls:

On 1st April there were three calls and two more on 3rd April:

Nine calls made to Vice Boss Veloo in January and February… why?

Another prominent number to pop up in Gopi’s call data is the Chief of Perak’s D7, DSP Annadurai Veloo (0192639965), who once again is in charge of combatting gambling and vice, such as prostitution.

There were a further 12 calls over March and April, including nine mintus of chat just before 9pm on April 2nd and a spat of calls on 16th and 17th:

Sarawak Also In The Frame

DCP Abdul Aziz Yusof, the Deputy Chief of Police of Sarawak (0197000211) is also one of Gopi’s contacts, according to his phone data.

Gopi made six calls to him in January and February and thirteen calls over March and April.  Some matter had the two in touch over a number of calls on April 13th, for example:

‘Lay Off The IGP’ PM’s Office Has Told MACC!

There is a long list of other police officers whose phone numbers have been identified on Gopi’s call list, Sarawak Report has been reliably informed.  A good deal of further visual evidence has also been collected confirming this suspect’s close relations with officers at the highest level in the police force. 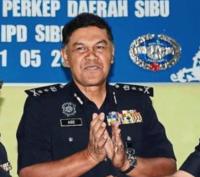 However, this shocking investigation, which has produced cash hauls from suspect’s premises of hundreds of thousands of ringgit, now seems to be under threat. Sarawak Report has learnt that in recent days personnel from the Prime Minister’s Office have been putting direct pressure on the MACC to keep this probe away from the door of the IGP and his top colleagues.

“phone calls have been made’

a source with insider contacts has told us. How are the MACC possibly going to ignore all this evidence of such close and extensive contacts or sweep it under the carpet?

In his own defence the IGP yesterday again accused Sarawak Report of ‘targeting’ and ‘slandering’ himself and other senior Malaysian figures for reasons that he failed to define.  On the day the US Dept of Justice was reported as having filed more asset seizures linked to 1MDB (a scandal exposed by Sarawak Report) he accused our blog of making “baseless” accusations.

Yet, in the process he further acknowledged that a another article in this blog, written last year, was also in fact true.

Last year we reported that the IGP and a large number of his officers had been spotted at a five star hotel in Italy, along with their wives.  We received photographs and details of trips taken to other historic towns by the extended party.  At his press conference Khalid claimed we had mis-represented the trip, saying he was there with a sultan to “take two choppers there”.

Since the report is now corroborated, the IGP ought surely explain why he and a sultan were needed to fly to Italy to deliver helicopters and why so many officers and their wives were also needed to attend the trip?  Sarawak Report had understood that they had been on a training exercise, although the presence of wives remains a mystery.