Does Blogger 'RPK' Still Stand By His Earlier Testimony?

In a recent article in the blog Malaysia Today, the blogger known as RPK re-acknowledged that he is the owner and author of that blog, something he had previously denied.

His present stance is one of unflinching and unquestioning support of the Prime Minister, in the face of a series of scandals, including evidence of massive thefts from 1MDB; vote-buying and numerous other concerns about the administration.  RPK has even pronounced himself to be a “proxy” for Najib, fighting his corner and “crossing the Rubicon” to confront his enemies. His article even implies he is paid to do it.

However, before it was different: until 2011 RPK was famously opposed to Najib and sympathetic to Anwar Ibrahim the opposition leader, who was being driven back into jail through the legal processes of what has been termed ‘Sodomy II’.  RPK led on stories linked to the Altantuya murder, ruling party corruption and also what he described as a conspiracy to jail Anwar on charges that would repulse the electorate.

Central to that conspiracy, according to RPK, were Najib himself, his close lawyer from the Altantuya case, Mohd Shafee Abdullah and the Assistant Commissioner who had been implicated in an earlier violent attack on the opposition leader, Rodwan Mohd Yusof.

In an article dated August 6th 2008 RPK cited in detail, giving apparent eye-witness evidence, the existence of an ‘Operations Room’, which he claimed was set up in Shafee’s office to direct and manage the operation for framing Anwar.

RPK describes white boards with names and arrows and direction points and makes no bones about his accusation that this sodomy case was indeed a set-up job and conspiracy, initiated by Najib and dircted by his trusted legal confidante Shafee Abdullah. Not least, because he says the operation was in existence even before the alleged victim reported the alleged incident of sodomy against Anwar.

This article remains, as of the point of writing, available and accessible to read on the website Malaysia Today.  Sarawak Report has no way of verifying most of its contents or otherwise. 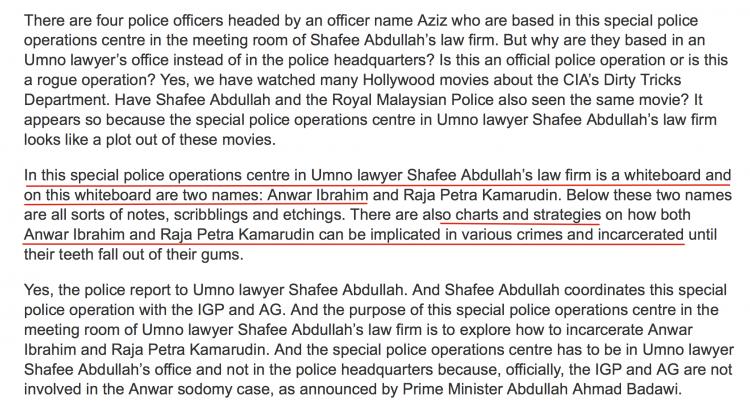 RPK puts himself at the centre of the matter, but makes clear that more critically Malaysia’s Opposition Leader was a clear target

However, given that Sarawak Report has now received evidence from the Task Force investigations into 1MDB that the very same Shafee Abdullah received RM9.5 million directly from Najib’s personal bank account just before the conviction of Anwar on appeal and given that this is now once more at the centre of a political storm in Malaysia as Anwar’s lawyers consider an application to have the charges dismissed, we suggest that RPK re-visits this matter and tells his new audience of Najib-supporting readers whether or not he continues to stand by his earlier article, which remains online?