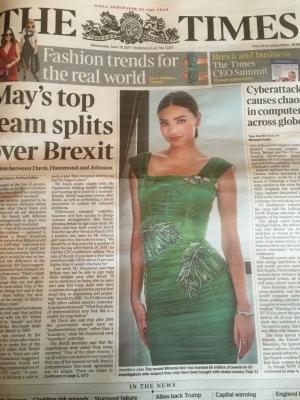 Front page in the Times

The leading story in the Times Newspaper today has offered the Malaysian Prime Minister, 1MDB and their admittedly limited group of enthusiastic supporters the perfect opportunity to prove their various denials by putting them to the test in court.

The paper leads with the headline “Supermodel surrenders £6million jewels’ and then introduces the UK public across a full page story to the essentials of the 1MDB theft.

“Gifts are suspected to have been bought with stolen Malaysian funds”, the paper begins detailing the gifts also to Leo DiCaprio, the Picassos and Jho Low’s super yacht.  This is all, of course, old news to Malaysian readers of online news, however Malaysians are also aware that the Prime Minister, the fund and his government are all denying any of this is true.

They have accused the United States Department of Justice of being in a ‘political conspiracy’ against Najib and have accused journalists like Sarawak Report of being agitators, spies, collaborators and all the rest.

They even dismiss the detailed 251 page court document showing the exact money trails by which the 1MDB money was stolen by Jho Low, then went into gifts and bank accounts belonging to Najib, his wife and their celebrity contacts, as ‘showing no proof’.

So far it has been Najib and his supporters who have been remarkably unable to produce any evidence to back their far-fetched excuses, compared to the overwhelming and devastating documentation by US and other foreign investigators.

In fact, the replacement AG’s refusal to cooperate, his refusal to investigate and now his pretence that no one has asked him to do either has been a stunning tacit admission of guilt on the part of his de facto boss, Najib.

Today the PM propaganda unit Jasa even blethered that Miranda Kerr should have handed the jewels back to Jho Low on the basis they had not been bought with stolen money…. without providing a shred of evidence, once more, for such a wild claim.

At the end of next month Najib has to find over $600 million to pay IPIC as a first installment of what Malaysia has been forced by court action to admit 1MDB owes.  Laughably he pretends he is going to get this from money he pretends still exists in 1MDB’s own bank accounts, even though the combined investigations and court actions of the US and Singapore have demonstrated there isn’t a penny there.

Bankers are serving jail sentences in Singapore having admitted that fact and their own complicity in the thefts.

Malaysians will be treated to a ridiculous farce as Najib will have to raise the money from the Treasury, or taxes or borrowing (or stealing behind the scenes from other public companies and sell offs) and then lie that it is coming from 1MDB.

Unless, of course, he bites the bullet and takes The Times to court for joining the conspiracy of lies.  In fact, there are numerous papers he could sue, since they have all covered the case – he can take his pick.

He didn’t do very well in the arbitration process, however, which he plainly lost completely.  He would lose in the London Court as well, given he plainly has no evidence to back up nonsense.

So Najib will keep his head down and hope Malaysians will continue to put up with their Thieving Clown Prime Minister.

The Guardian version of the article is below:

Australian model Miranda Kerr has handed over $US8.1m (£6.3m) worth of jewellery to the US justice department after prosecutors said the items were bought for her by a Malaysian financier with stolen government money.

“From the start of the inquiry, Miranda Kerr cooperated fully and pledged to turn over the gifts of jewellery to the government,” the spokesman told Dow Jones newswires. “Ms Kerr will continue to assist with the inquiry in any way she can.”

More than $4.5bn has been stolen from a Malaysian state fund, 1MDB, which was set up by the prime minister, Najib Razak, who denies any wrongdoing. Prosecutors allege nearly $30m (£23.8m) misappropriated from the fund was also used to buy jewellery for the wife of “Malaysian Official 1”, which refers to Najib.

Kerr was gifted the jewellery in 2014 by Jho Low, a financier at the heart of the corruption scandal that has engulfed the Malaysian government.

The US justice department is seeking to seize more than a billion pounds in assets, including a luxury mega-yacht owned by Jho Low.

Kerr, who owns her own jewellery line with prices starting at $69 (£54), follows the example of actor Leonardo DiCaprio, who has turned over $3.2m (£2.5m) of artwork, including a Picasso painting, gifted to him by Jho Low.

The rights to two Hollywood films, The Wolf of Wall Street and Dumb and Dumber To, have also been seized. The films were produced by Red Granite, a firm founded by Najib’s stepson, Riza Aziz.

US authorities have not charged Jho Low, Najib or Aziz in the civil complaint, while Kerr and DiCaprio have not been accused of any crime.

1MDB said on Friday that it had never been contacted in relation to the case.