Top Suspect In Police Protection Racket Was In Direct Phone Contact With The IGP! 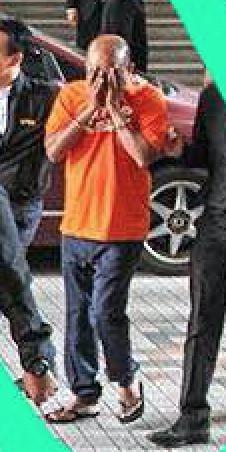 Documents obtained from sources close to the investigation indicate that Gopinathan Krishnan, the top suspect arrested last month as the key ‘intermediary’ in a major police protection racket across gambling dens and protitution houses in Malacca, was in direct telephone contact with none other than the Inspector General of Police, Khalid Abu Baker.

The round-up of 12 suspects, many of them police officers, was termed Operation Gopi by the Malaysian Anti-Corruption Commission (MACC) owing to Gopinathan’s alleged pivotal role managing the racket on behalf of big-wigs at Bukit Aman.

We have already earlier identified several calls made by Gopi in April to the known number of Khalid Abu Baker’s brother in law, Mohd Isa bin Hussin.

Sarawak Report had already exposed the IGP’s business links with Isa bin Hussin, who is selling guns (Khalid’s daugher has the majority share of Nilai Arms, which is run by Khalid’s sister’s husband, Isa bin Hussin).

According to sources, another number dialled by Gopi, 60196000182, is known to be the official personal number of the Ketua Polis Negara i.e. Khalid himself and Sarawak Report has established from billing information that ‘Gopi’ phoned him at twenty three minutes past eight in the morning on February 4th and that the two men chatted for three minutes.

Why did Gopi pick up the phone to Khalid at twenty past eight in the morning on February 4th?

Gopi is understood to have fully confessed to his role in gathering cash off Malacca police officers, who were in turn allegedly collecting it from the illegal operations in the state.  Millions were being raised, informants say, and the network is believed to extend far beyond Malacca itself.

Police officers caught up in the scam have been saying they were offered no choice by intermediaries such as Gopi and his gang, because he in turn was connected to senior officers at Bukit Aman, who could have non-compliant policemen transferred. This matter has already been widely reported in the Malaysian media, leaving many to wonder who were the senior officers wielding so much power and forcing police to collect the cash and pass it on to Gopi?

It could, of course, be that the case has merely thrown up an unfortunate coincidence and that it just so happens that the allegedly crooked Gopi is a family friend of the IGP’s, dragging him into this unhappy proximity to one of the biggest scandals to hit the Royal Malaysian Police Force in several years.

After all, it is not just Khalid and his brother in law who have featured in Gopi’s recent phone calls, but Khalid’s son as well.  Indeed, 26 year old Khairul Amri Bin Khalid appears to have been even more frequently in touch with Gopi than his dad and uncle put together over recent weeks and months.

Then in February there were another three short calls on 3rd, 4th and 5th:

In March there was another call:

And in April another:

Sarawak Report has only limited access to the investigations,  However, it is clear that there has been regular and consistent contact between the IGP, his close family members and the man now accused of being at the centre of a police protection racket, where he allegedly dropped the names of powerful people from Bukit Aman to force local police officers to collect cash from gambling dens.

It may be that Gopi is a family contact who, for instance, has abused his connections.  In which case, such matters ought to be explained as a matter of urgency. Certainly, any action to close down the Malacca vice squad investigation or to make reprisals against MACC officers, trying to perform the task set them by the Prime Minister to expose corruption, would not be an acceptable response.

Unsurprisingly, there are also growing questions over a recent announcement by the IGP that he plans to sack a large number of his senior narcotics team at Bukit Aman, supposedly as part of his own ‘clean up operation’.  Many insiders are calling it a diversionary tactic.

Malaysians are likely to be more reassured if he clears up this matter relating to himself first, before purging his police force of other senior officers.