As Najib’s fast evaporating fan club are fond of reciting, Malaysia’s Prime Minister has fallen victim to a ‘global plot’.

The latest alleged salvo comes from France, where newspapers today reported the indictment of a further two former senior French executives on suspicion of “active bribery” over the sale of three lousy and over-priced Scorpene submarines to Malaysia back in 2002. The suspected recipient of the bribe was again named in court as being Najib Razak:

“The prosecutor suspects that commissions, disguised as consultancy contracts, may have been employed to corrupt the former Malaysian Minister of Defence, Najib Razak, who became Prime Minister in 2009, through one of his advisers, a militry expert named Abdul Razak Baginda”. [translated from Le Parisien]

There are now four top people being prosecuted in France for their part in using bribery to sell arms (the latest two are Philippe Japiot ex-president of the international arm of the state naval contractor, DCNS and Paul Perrier ex-CEO of its private partner, Thales) yet to his supporters in Malaysia this is all merely a front for attacking Najib and part of a ‘heinous agenda’ to topple him from power.

The reason for the ‘plot’ changes as often as it is written about, but the theme remains that others are ganging up on this innocent Malaysian leader, owing to selfish designs of extreme complexity.

As the list of countries laying charges at this kleptocrat’s door enlarges, information about these webs of supposed intrigue are pumped out over the internet all the more enthusiastically, replete with pictures and flow charts stuffed with arrows linking one ‘accuser’ to another.

The bloggers RPK/ Third Force/Malaysia Outlook, who most specialise in such material, have declared the writer of Sarawak Report, for example, to be simultaneously a ‘CIA agent’ behind the action by the United Sates; an agent for France seeking energy contracts in China; an agent for ‘the global Jewish plot’ organised by the transparency campaigner George Soros; an agent for the ruler of Abu Dhabi, Sheikh Khalifa bin Zayed and so forth.

The far simpler explanation, of course, is that the Prime Minister of Malaysia has been engaged in dirty ‘money politics’ for a very long time and that the threads have finally started to unravel: the web of intrigue was that of Najib, as he embarked on a quest for untold riches and absolute power in Malaysia and now it is under a forensic spotlight, thanks to the trigger of 1MDB and a skeleton that simply refuses to remain in its closet – that of the murdered translator on the submarine deal, who was threatening to blow the whistle, Altantuya Shaaribbuu.

This latest move by the French prosecutors comes years after investigations began into the disastrous and over-inflated deal to sell three submarines to Malaysia, which it plainly didn’t need and which have lamentably under-performed. All Defence Minister Najib’s bright idea.

That French investigation was in turn prompted, long before the 1MDB scandal broke, by the efforts of a Malaysian NGO, Suaram, and in particular the campaigner Cynthia Gabriel, who alerted the French that a young woman, linked to Najib and Baginda, had been blown up by Najib’s bodyguards after threatening to blow the whistle on corrupt payments on the deal.

Once the officials in a genuine democratic country have been prodded to look at something, then a process begins. It’s not like Malaysia, where Najib can solve such matters by ringing up the head of whichever agency is giving him trouble and tell them to close the matter down.

The French looked and they have found dirt. They will not be prosecuting Najib himself, because that is not their jurisdiction and the whopping 119,000,000 Euros paid as a ‘consultancy fee’ to Perimekar (owned by Baginda) ought to be the concern of the Malaysian authorities instead.  After all, this was Malaysia’s public money.

The French are purely concerned with the conduct of their own officials and what relatively minor kickbacks they received.  However, their findings have turned a glaring spotlight onto Najib’s conduct in this affair, which has reached the international press, so he cannot shut it up: an unnecessary billion dollar arms purchase; submarines, which proved not fit for purpose; the price inflated by massive kickbacks, which appear to have been the primary motivation for the deal….. all at the cost of ordinary Malaysian taxpayers.

And then there has been the murder of the woman who had been the lover of Baginda, alleged lover also of Najib (according to the statutory declaration of PI Bala) and who was demanding a pay-off.  A murder carried out by Najib’s bodyguards, found guilty during a trial subjected to persistent cover-up.

So, it is up to Malaysians to decide if their autocratic leader is the victim of a global propaganda plot in relation to this and the various other scandals involving vast thefts of public money – or if it is he who is the thief responsible for the cover-ups.  Below we attach google translations of two of France’s articles on the case today: 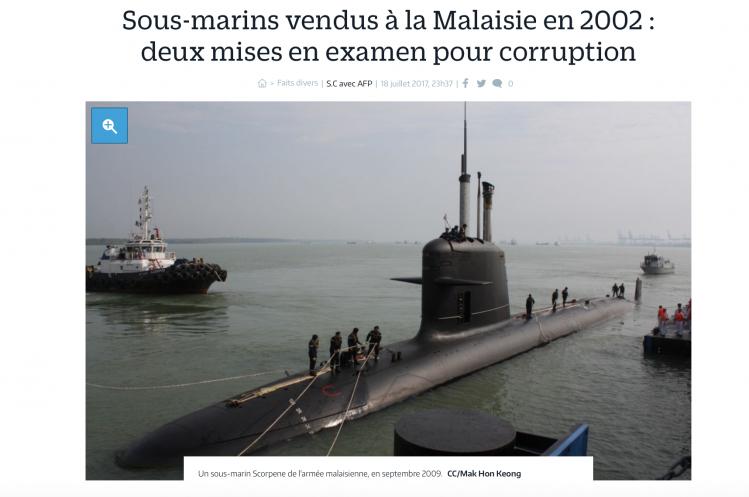 A former boss of the Naval Buildings Directorate and a former head of Thales are suspected of bribing the Malaysian authorities for contracts.

A former head of the international subsidiary of the Directorate of Shipbuilding (DCN) and a former head of Thales have been indicted for corruption in the investigation into the sale of submarines to Malaysia in 2002.

Convened in May in the office of the investigating judge Roger Le Loire, Philippe Japiot, a former president from 2001 to 2007 the DCNI, the international arm of the Directorate of Naval Construction (recently renamed Naval group), and Jean-Paul Perrier, Former chief executive officer of Thales and former president of its international subsidiary Thint, have been indicted for “active bribery”, said one of these sources. Philippe Japiot was also indicted for “abuse of social assets” and Jean-Paul Perrier for “complicity in the abuse of social assets”.

Suspicion of corruption by the Malaysian Minister of Defense

In this investigation educated financial center since 2010 following a complaint from the NGO Suaram Malaysian Anti-Corruption, justice suspect commissions, hidden behind consultant contracts, have been used to bribe the former Minister of Defense of Malaysia, Najib Razak , Became Prime Minister in 2009, through one of his advisers, an expert in military matters, Abdul Razak Baginda.

The judges have already indicted two former leaders of the defense industry: Dominique Castellan, who was also president of the DCNI between 1991 and 2001 and Bernard Baïocco, former president of Thales International Asia (Thint Asia). The four defendants at this stage in the investigation are challenging the facts.

A contract worth nearly one billion euros

The case concerns the sale in 2002 of two Scorpene submarines and an Agosta submarine to the Royal Malaysian Navy for nearly one billion euros. The operation concluded by the DCNI, together with the electronics and defense group Thales, took place in a context of tightening regulation on the remuneration of intermediaries.

This type of contracts passed in the margins of the negotiation is at the heart of the file. One of them, called C5 “commercial engineering” and signed in August 2000, provided for the payment by the DCNI 30 million of selling expenses for export (CFE) to Thint Asia, the supposed structure help Group to promote its products, according to a source close to the file.

According to the survey, another industrial company Terasasi, whose main shareholder was Abdul Razak Baginda, has touched Thint Asia about the same amount for consultations, as part of another contract, the C4 . Investigators questioned whether these benefits could have been a dressing up to mask the payment of bribes.

The judges are also interested in another contract, providing for Malaysia’s payment of € 114 million to a local company, Perimekar, which was run by the advisor’s wife at the time, but could escape the investigation , Because the facts would not have taken place in France.

The behind-the-scenes of this market had been discovered during the investigation in Malaysia of the assassination in 2006 of a Mongolian interpreter and intermediary, Altantuya Shaariibuu. This 28-year-old model, who was also the mistress of Abdul Razak Baginda, had participated in the negotiations.

A former chairman of DCNI (now Naval Group) and a former managing director of Thales have been indicted for bribery in the 2002 submarine sale investigation in Malaysia. Past consultancy contracts In the margin of the sale are in the sights of the investigators.

A former head of the international subsidiary of the Naval Buildings Directorate (DCN) and a former official of Thales were charged with bribery in the investigation into the sale of submarines to Malaysia in 2002, “Sources from the file said on Tuesday.

A complaint from the Malaysian anti-corruption NGO Suaram

In this investigated investigation at the financial center since 2010 after a complaint by the Malaysian anti-corruption NGO Suaram, the judiciary suspects that commissions, concealed behind contracts of consultants, were used to corrupt the former Malaysian defense minister Najib Razak , Today Prime Minister, via one of his advisers, Abdul Razak Baginda.

The judges have already examined two other leaders of the defense industry: Dominique Castellan, who was also president of the DCNI and Bernard Baïocco, former president of Thales International Asia (Thint Asia).

Justice is interested in the sale in 2002 after years of negotiations of two Scorpene submarines and an Agosta submarine to the Royal Malaysian Navy for nearly one billion euros.

Two contracts C4 and C5 under the scrutiny of investigators

The operation concluded by the DCNI, together with the electronics and defense group Thales, took place in a context of tightening regulation on the remuneration of intermediaries.

This type of contracts passed on the margins of the negotiation is at the heart of the file. One of them, called C5 “commercial engineering”, provided for DCNI to pay 30 million euros of export trade costs (FCE) to Thint Asia, the structure designed to help the armaments group To promote its products, according to a source close to the file.

The then Minister of Defense is now Prime Minister

According to the investigation, another industrial company, Terasasi, whose main shareholder, Abdul Razak Baginda, a very close to the then Minister of Defense, Najib Razak, who became Prime Minister in 2009, touched Thint Asia at Almost the same amount for consultations, under another contract, C4.